The Weimaraner is a versatile hunting dog. Suitable for work on the trail of blood after a shot and for searching for wounded game. Also suitable for work in water. At home, she proves her qualities as a watchman and protector. Sometimes he can be seen in the role of a family pet and companion. In such cases, he should at least be trained as a guide dog and participate in canine sports or tracking work. 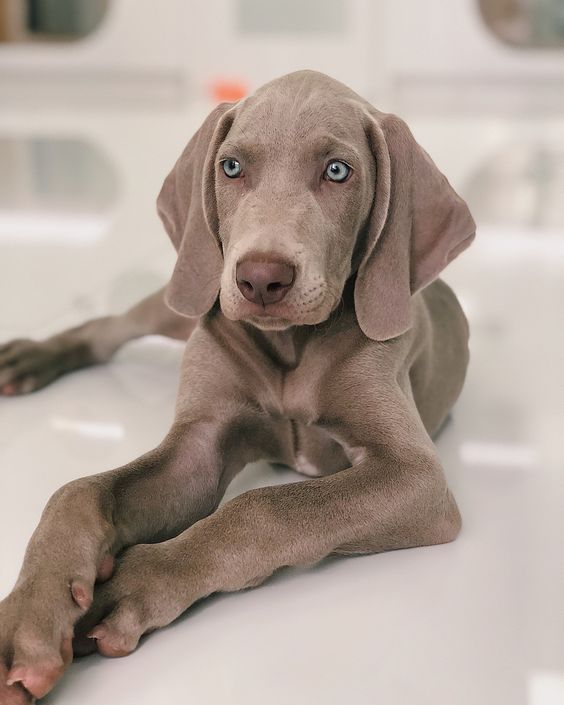 The Weimaraner breed of dogs originated in the early 19th century in Germany, at the court of the capital of the county of Saxe-Weimar – the city of Weimar. Local noblemen loved all the traditional entertainment inherent in their class. Accordingly – hunting and dogs, including, considering themselves great experts in this.

It was in the nobility circles of Weimar that the Weimaraner breed was bred, or, as they are also called, the Weimar Pointing Dog. Although this happened relatively recently by historical standards, and among the nobility, everyone knew how to read and write, however, no detailed records of the breeding program have been preserved. Nevertheless, it is quite precisely known which breeds took part in this: Bloodhound, English Pointer, German Shorthaired Pointer, and Great Dane.

This breed, as conceived by the breeders, should have had great endurance, physical strength, and power, intelligence, and fearlessness. The Weimaraner was used for hunting big game – deer, wolves, and even bears. At the end of the 19th and the beginning of the 20th century, Germany experienced a great industrial upsurge, and the Duchy of Saxe-Weimar was fully united with the German Empire.

Accordingly, the forest lands decreased, as did the amount of game, and hunting itself ceased to be a purely noble entertainment, and game ceased to be a purely noble property. Weimaraner began to be used for hunting hares and foxes, as well as for birds. The Weimaraner breed club was formed in Germany in 1897 and it was a rather closed community.

Now it may even seem wild, but at that time it was not allowed to have a dog of this breed if you were not a member of the club. And to join the club, as you yourself understand, it was possible only with the permission of its members. In 1929, American athlete Howard Knight was honored to join the club, and even received permission to export two dogs to the United States. Moreover, these dogs (except for his own) were allocated to him by club members in order to distribute the breed in the United States. Knight promised to keep the breed clean.

After World War II, many of these dogs came to America, along with the military who returned home. Even President Dwight D. Eisenhower brought in a Weimaraner and – attention – brought him to the White House. By the way, in their homeland, these dogs are also called “the silver ghost”.

There are breeders and dog owners who sell puppies of other colors, such as blue, under the guise of “unique”, but the truth is that these “unique” colors are not recognized by any association. In other words, it’s just a hoax.

The Weimaraner is known all over the world for the work of contemporary photographer William Wegmar, using the breed’s amazing ability to take very “human expressions”, or muzzles – whatever. He disguises dogs in human clothes, uses wigs and makeup elements, making them into monarchs, nobles, characters from fairy tales, etc. 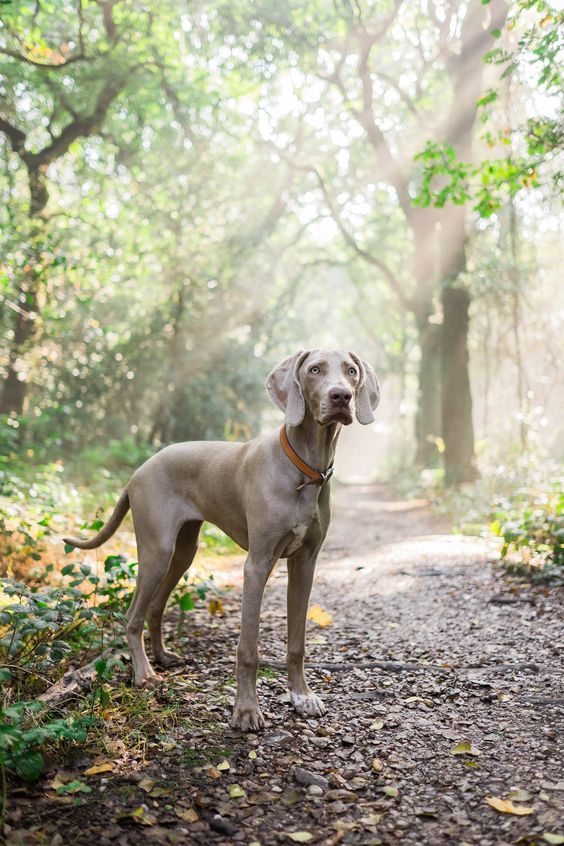 Weimaraner dogs are large, with a muscular physique. The ears are hanging, the limbs are longer than the average, the chest is pronounced. The tail is medium, the coat is short. Shades of wool from silver to silver-gray, eyes – from light amber to gray-blue or gray. 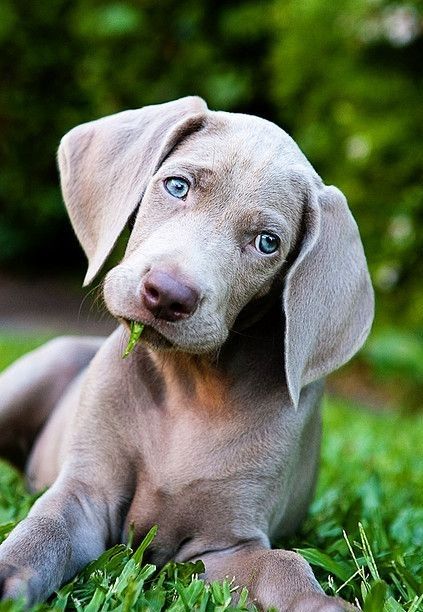 The Weimaraner breed of dogs has a difficult, but generally good character and is very loyal to its owner and family. However, there is also a downside to the coin. If the dog is left to itself, not to engage in its upbringing and socialization, the instincts that it carries in itself from nature will prevail. It’s unavoidable. You must understand that this is still an animal.

Please note that the Weimaraner will dig under the fence, shamelessly gnaw furniture, exterminate cats and all small animals in general, except perhaps, except for small dogs (although there is no complete certainty here), and steal food from the table, and climb into your bed at night and bark loudly at every opportunity – in a word, he will behave as he pleases. At best, he will obey you once. There is only one way out – education, and the correct positioning of oneself as a leader.

In general, one cannot say that the “silver ghost” (as they are called in their homeland) has an uncontrollable character, it is not. Rather, his character will become uncontrollable if at an early age there is no firm hand and a stern voice that will rule.

And at the same time, the Weimaraner is inseparable from the owner, he is ready to spend every minute with him. Sometimes they get so used to a loved one that they can experience prolonged separation inadequately, up to destructive behavior, and even (!) Self-harm. Therefore, you will have to take a dog with you on vacation, and leaving the animal alone every day (if you are an alone owner and spend the whole day at work) is highly discouraged.

The breed has a high level of energy, which is not surprising – after all, it is a born hunter, from which the following circumstance follows. Namely – his hunting instincts and excellent sense of smell. If you go for a walk, remember that the dog will most likely try to hunt any small animals within its reach. It is extremely difficult to get rid of this, and if you let her off the leash, for example, when you are on a picnic in the forest, there is a chance that the dog will simply run away for a very long walk – to look for living creatures in the forest. And you have to look for it.

The breed has two hidden, negative, opposite traits – aggression and shyness. How it goes together is not clear, but it goes well. Socialization and, again, correct upbringing helps here. The pet needs to be introduced to other people, as well as other dogs, which is very important, and to form the correct attitude and behavior in society.

This breed is not for everyone – the Weimaraner is well suited for an experienced owner who does not feel fear or shyness in front of large dogs. The Weimaraner breed negatively perceives strangers, sometimes with aggression. Therefore, when walking among people, do not forget about the muzzle and the leash. It can perform guard functions, and with proper education, it will be an excellent companion who can behave decently both in human society and in the presence of other dogs.

The attitude towards children is ambiguous. If this is a child from his own family, he does not test the patience of a dog and knows how to behave, there will be no problems. However, children under six years old should not be left alone with these pets. Weimaraner is a very intelligent breed, understands people well, and knows how to “think with your own head”. 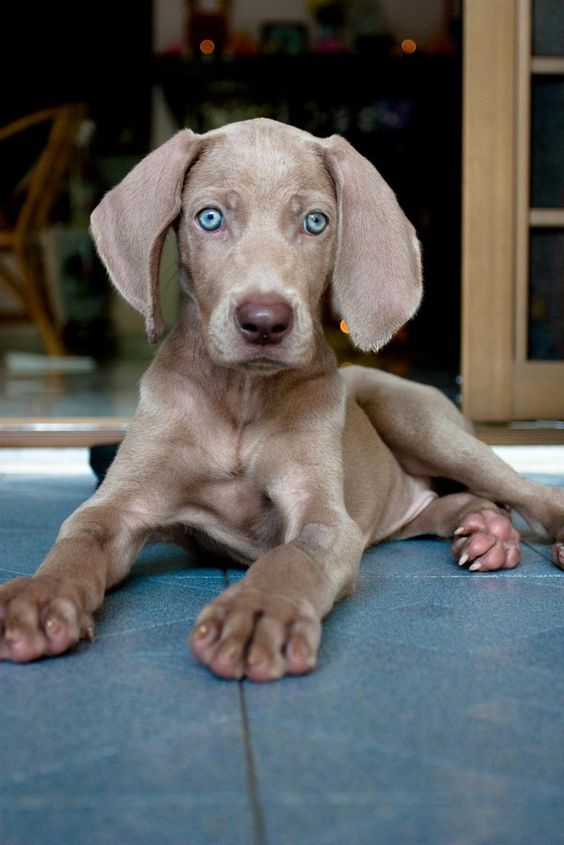 The Weimaraner dog breed needs education and training, this is not just a fact, it is an urgent need, otherwise, the pet will turn into an eternal headache for the owner and others. To avoid this, start learning from an early age, and establish strict procedures in the house that should not be violated in any case.

It is believed that the Weimaraner breed is one of those that are difficult to train. These dogs need to be trained throughout life, there is nothing you can do about it. But the greatest emphasis should be made before the age of three.

Workouts should be consistent, soft, when necessary, strict, without unnecessary nerves, rudeness, and shouting. Try to win the dog’s favor with firmness, patience, and consistency, and use various forms of encouragement. 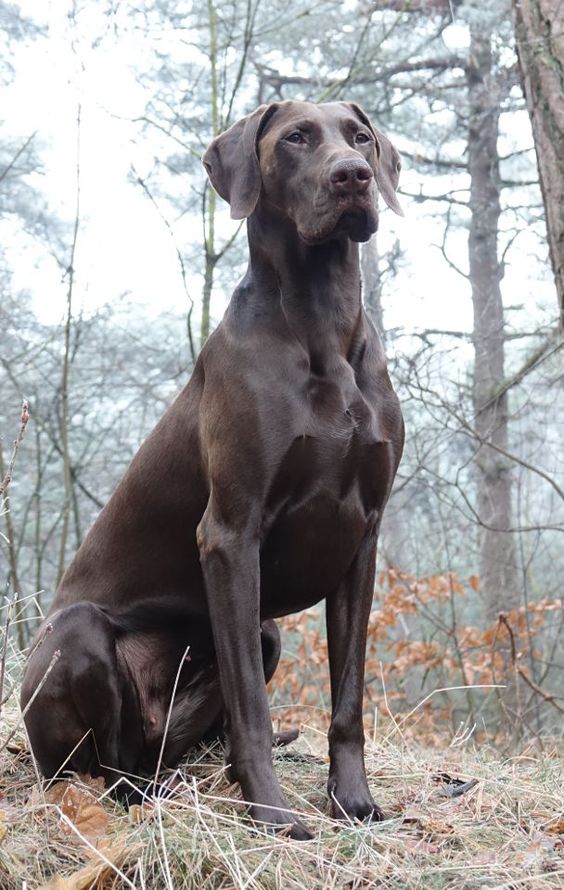 The Weimaraner dog is a smooth-haired dog, and therefore needs to be combed out once a week. The eyes are cleaned daily, the ears 2-3 times a week, claws are trimmed 3 times a month, the dog is bathed at least once a week. 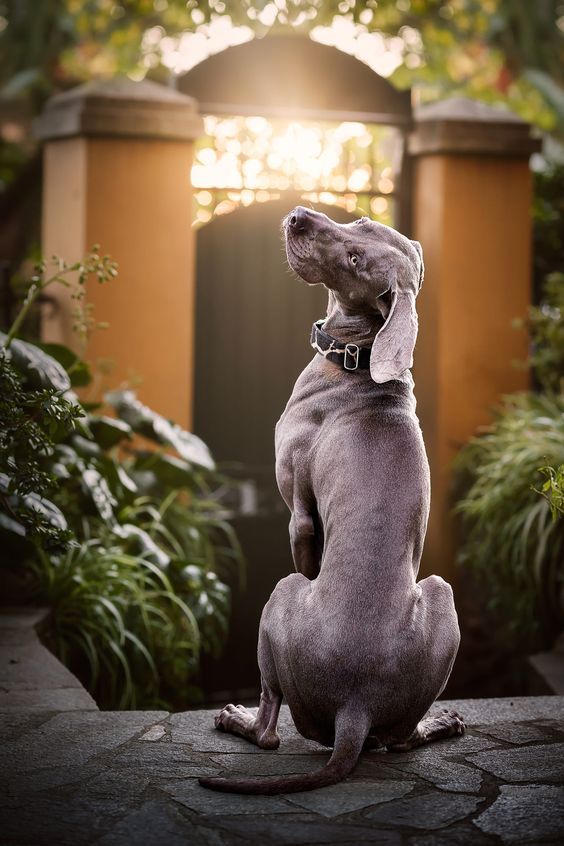 Weimaraner is a breed that has good health, but is not devoid of a tendency to certain diseases, namely:

A small percentage of Weimaraner puppies respond to vaccinations, especially combination vaccines, with fever, elevated white blood cell counts, and inflamed tissues and joints. Reactions most often occur between 12 and 16 weeks of age. It is recommended that puppies are vaccinated only at 8 and 12 weeks of age with the four main vaccines: plague, adenovirus 2, parainfluenza, and parvovirus. Rabies vaccination can be given at 16 weeks of age.