Chesapeake Bay Retrievers have been bred in their eponymous home region since the 19th century. They are hardy loons and are primarily used for duck and geese hunting in the US. They are also used as K-9 service dogs. If you are interested in the dogs with the extraordinarily robust fur, find out everything you need to know about the dog breed, which is rather rare in Europe, in our overview.

The Chesapeake Bay Retriever shares many similarities with other retrievers such as the Golden and Labrador Retrievers, although the dogs are unlikely to be direct relatives. A clear identification feature of the dogs is their brown fur, which has a special structure. Similar to a duck’s plumage, cold water is kept away from the body by the dense, oily undercoat. Males reach a height of 58 to 66 cm at the withers and weigh between 29.5 and 36.5 kg. According to the breed standard, adult bitches should be between 53 and 61 cm tall and weigh 25 to 32 kg.

The Chesapeake Bay Retriever from head to tail: The water dog with the bright eyes 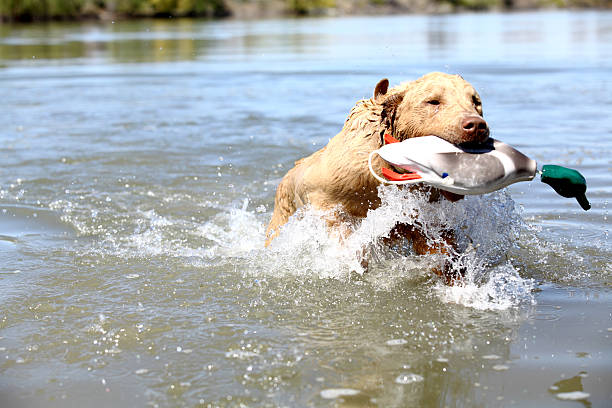 Where are the Roots of the Chesapeake Bay Retriever?

Records of Chesapeake Bay Retrievers date back to the 16th century, but purposeful breeding of the hunting dogs did not begin until the 19th century. The Chesapeake Bay Retriever is the official state dog of Maryland and is still used to hunt birds in the area today. It is perfectly adapted to its natural environment around the cool Chesapeake Bay. The water dog is prized for its resilience and loyalty; he jumps into ice-cold water without hesitation and brings the prey back to the hunter unharmed. The breed was recognized when the American Kennel Club was founded in 1878 and an international standard was established.

Ancestors and close relatives of the Chesapeake Bay Retriever

Nature and Character of the Chesapeake Bay Retriever 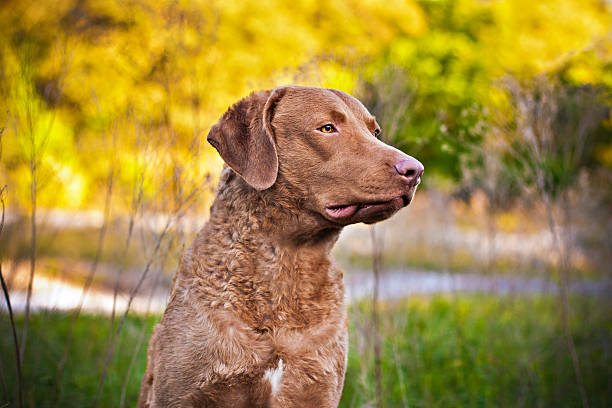 The Chesapeake Bay Retriever keeps a cool head in every situation. Its dense, waterproof coat makes it an excellent water dog. When hunting, it can wade through swamps and lake areas for hours in wind and freezing temperatures and track down the game. As companion dogs, representatives of the breed are valued well beyond the borders of Maryland and the United

States for their loyal and calm nature. They always behave appropriately and know exactly when it is the right time to play and romp and when they should concentrate and behave calmly.

Characteristics of the Chessies at a glance

The Chessie needs a meaningful job around the house

The dogs love their work – whether as hunting dogs, police dogs, or as guard and protection dogs, they carry out their tasks conscientiously. Chesapeake Bay Retrievers without specific tasks quickly feel under-challenged. Badly behaved Chessies are aggressive towards strangers. When dogs are kept busy, they develop into even-tempered and loyal companions who rarely show signs of stress and are always ready to go.