Contents hide
1 History of the Affenpinscher
2 The Appearance
3 Essence and Character
4 Purchase of an Affenpinscher
5 What Do I Need to Pay Attention to When Purchasing?
6 Puppy Development and Education

History of the Affenpinscher

Nobody knows exactly how long the Affenpinscher has existed. In fact, there have been paintings of dogs since the mid-15th century, in which clear parallels can be seen. However, it is unclear to what extent these are the ancestors of the Affenpinscher. Genetically, the Affenpinscher goes back to the Miniature Pinscher. From 1896 the two breeds were separated by definition. With this, the goal-oriented breeding of the Affenpinscher took on concrete forms. The dog was initially used as a companion dog and a so-called ratter (pied piper), but soon there was a change to becoming a house and family dog. Nevertheless, the breeding stocks in Germany continued to decrease from the middle of the 20th century, so one can now speak of an endangered situation. 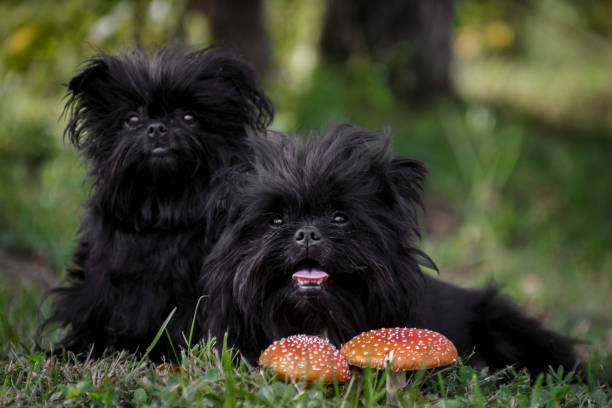 The Fédération Cynologique Internationale specifies what the German Affenpinscher should look like. A full-grown animal should be about 30 cm high at the withers and weigh between 4 and 6 kg. The Affenpinscher has a strong build, its black fur is dense, stringy, and hard. Although this was different at one time, only black animals are now accepted according to the breed standard. The dog’s head is eponymous and particularly expressive. The entire face is framed by erect hair. The eye area also grows in places. Other prominent facial features are the ears that are folded forward and the compressed muzzle area.

The Affenpinscher has a multifaceted personality. This includes his enthusiasm for any kind of physical activity and joint action. Meanwhile, he proves his compatibility with other conspecifics, which is why he is a welcome guest on meadows and in dog groups. In addition, however, he also has the ability to insist on his rights and to protest. The Affenpinscher can be a little stubborn.

At the same time, he needs to be cuddled and clingy. He cannot resist offers of petting from his human. Because there is a strong bond with its owner, the Affenpinscher stands up for him bravely. He bravely keeps any attackers away from his family. With the Affenpinscher, you are bringing an intelligent and adaptable dog into your home that can get used to most circumstances. Because of his openness and situational flexibility, he is also a suitable dog for the city. In principle, he fits into any household but prefers those who respect his needs and keep him busy.

Purchase of an Affenpinscher

If you are interested in an Affenpinscher, you have to try very hard to get a dog. The breeding stocks are very small in this country due to the small litter size and the exotic appearance. There are also hardly any mixed-breed dogs. So be prepared for a waiting time, a long distance, and a corresponding purchase price. The prices for a pedigree dog (serious breeding according to the FCI standard) start at around 1,000 euros. The costs for travel and basic equipment are added.

By the way: Although the animal shelter is a great alternative in many cases, the chance of finding a purebred Affenpinscher there is very small. But maybe there is a similar dog that comes close to the Affenpinscher in terms of character and appearance. 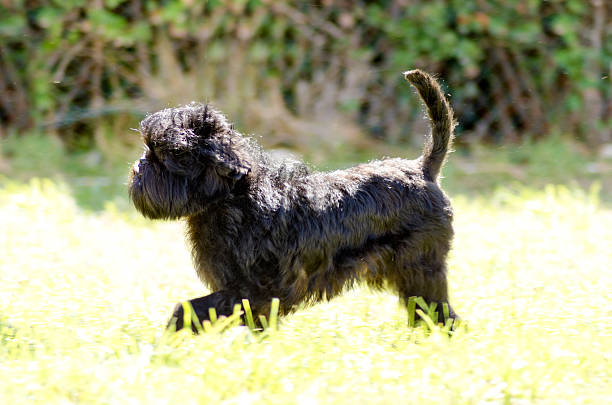 When buying, make sure that the nose area is well developed. Physical deformities, such as flat noses, are often associated with health problems that, in the worst case, can only be corrected by surgery. Also, make sure that the dog you want is really an Affenpinscher and not a black Griffon. For the layman, there is a risk of confusion between these two dog breeds.

The upbringing of the Affenpinscher is like the upbringing of other dog breeds. Start as early as possible, and be understanding but also assertive. Precisely because the newcomer can develop a stubborn head, you should establish clear rules. Due to his interest and high level of intelligence, he can achieve quick results and present them safely in everyday life with sufficient practice. To keep your four-legged friend happy, you can integrate varied elements into the training.

Since the Affenpinscher doesn’t like to be bored, he switches off faster with a monotonous approach than with exciting learning games and teaching topics that involve lots of movement. If you take responsibility for these points, you will have a companion with whom you can go to any imaginable place (in a café, on vacation, or in the office).