Over the course of its history, the energetic Appenzeller Sennenhund has risen from being a herding and farming dog to becoming a popular family dog. You can find out everything you need to know about the Appenzeller dog breed below.

History of the Appenzell Mountain Dog

As its name suggests, the Appenzell dog comes from the Appenzell region of Switzerland. There he was kept primarily by farmers and shepherds as a working dog. He guarded the house and yard just as reliably as he tended and herded the cattle. Appenzeller probably originally comes from even further away. According to one theory, his ancestors could have been war dogs of the Romans, which they brought with them to Switzerland on their campaigns across the Alps.

The prized workhorse was initially only bred by farmers. At the end of the 19th century, forest master Max Sieber campaigned for the establishment of a breed by introducing breed codes for the Appenzeller Sennenhund to the Swiss Cynological Society. Targeted breeding took place for the first time in 1898 in the canton of Appenzellerland on the initiative of the cynologist and geologist Prof. Albert Heim from Zurich. In 1914, Heim defined the first breed standard and since 1954 the Appenzeller Sennenhund has been a dog breed recognized by the FCI. 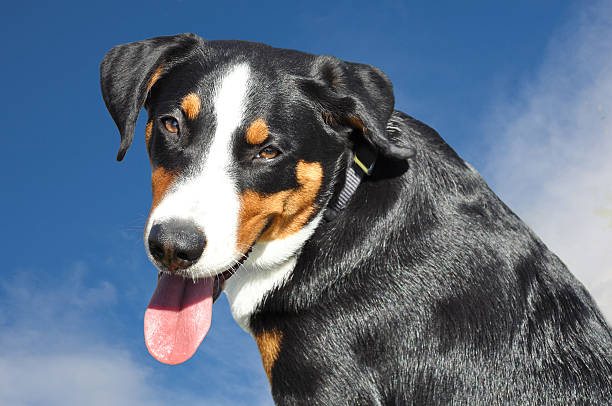 The four-legged friend has a muscular, almost square stature. With the size of the Appenzeller Sennenhund, it belongs to the medium-sized breeds. The color of the Appenzeller is similar to that of its relative, the Bernese Mountain Dog. Its easy-care, shiny black, sometimes also Havana-brown, the short-haired coat has symmetrically arranged brown-red and white markings. For example, the three-colored Appenzell dog has a white chest, blaze, tip of the tail, white collar, muzzle, and white paws. The brown-red can be seen above his almond-shaped, dark eyes, on the legs and cheeks. Typical of the breed, he carries his thickly hairy tail curled over his back like a post horn.

As working animals, Appenzell Mountain Dogs had to be fast and have stamina in order to be able to conscientiously carry out their job as farm and herding dogs. Therefore, the four-legged friends are still powerful bundles of energy that need a lot of exercises and meaningful activity. Due to the Appenzeller Sennenhund character and its pronounced ability to learn, its services are often used as a rescue, avalanche search, and guide dog. Since he is very alert, courageous, and loves to bark, the fur nose is also suitable as an excellent, incorruptible guard and protection dog. The confident, fearless four-legged friend is always ready to defend its pack.

The Appenzeller can very well distinguish between friend and foe. The fur nose behaves rather suspiciously towards strangers, but by no means aggressively. Furthermore, the intelligent, loyal companion knows how to assess situations, gestures, and facial expressions of people very quickly and react to them at lightning speed. This makes him the ideal companion dog, especially for the blind. But families also appreciate his friendly, loyal nature. The Appenzell Mountain Dog is affectionate, cuddly, and happiest when it can be part of the active family pack. Children in particular benefit from his tireless joy in romping and playing. The Appenzeller also gets along well with other pets.

Acquisition of an Appenzeller Sennenhund 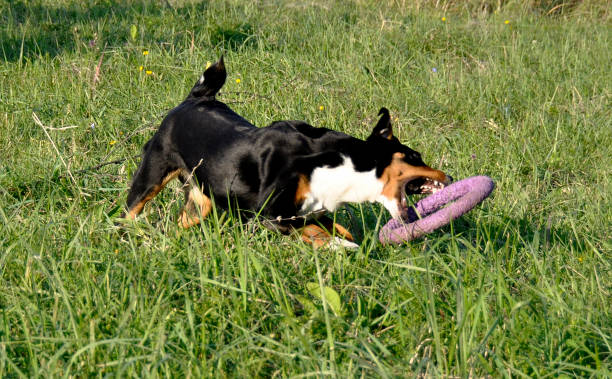 The four-legged friend is bred very little as a purebred with a very small number of usable breeding animals. The Appenzeller is therefore almost threatened with extinction. Reputable breeders do not focus on profit but on the well-being of their animals. Responsible breeders ensure that only healthy dogs are used for breeding so that no hereditary diseases manifest themselves in the breed. For this reason, parents and their puppies are thoroughly medically examined for breed-typical diseases. In addition, there are strict breeding guidelines.

The price for an Appenzell dog from reputable breeders is between 1,000 and 1,200 euros. This purchase price is quite justified since the breeders bear enormous costs. For example, for food, vaccinations, medical examinations, deworming, microchipping, covering the bitch, and membership in the association.