The Alaskan Malamute is often referred to as the “Locomotive of the North”. Here you can learn more about the northerner, who was used to pulling heavy loads for centuries.

History of the Alaskan Malamute

The history of the Alaskan Malamute is lost in prehistoric times. The oldest finds so far are 9,000 years old and come from Siberia. In the constant frost, the remains of the dogs were still well preserved. During the last ice age, the Bering Strait was covered in ice and people were able to migrate from Siberia to Alaska on foot.

Their dogs went with the hunters. They were loyal helpers in the hunt. Through the centuries they have been indispensable companions of the people of the north. They pulled their sleds and warmed them at night. Particularly strong dogs and those with the best hunting qualities were therefore selected for breeding. No value was placed on appearance. The four-legged friends were named after the Inuit tribe “Dog of the Mahlemiutes”. 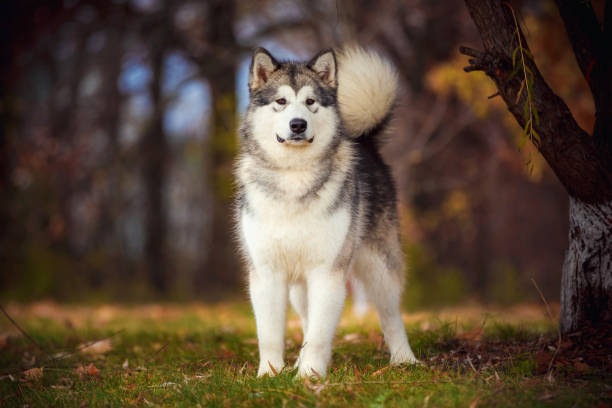 In the 19th century, one sport that grew in popularity in Alaska was sled dog racing. The Malamutes became stars and moved into the public eye. To improve their performance, breeders crossed them with other breeds of dogs.

That almost spelled the end of the original Malamutes. Rescue came in the 1920s. Lovers went to Inuit tribes who lived their traditional lives far away from civilization and found genuine Malamutes there. With some of them, they started breeding. In 1935 the Alaskan Malamute Club of America was formed and the breed standards were formulated. In the same year, the Alaskan Malamutes were also recognized by the American Kennel Club. The FCI recognized the breed in 1963.

Alaskan Malamutes are working dogs. They are used to moving around a lot and also need exercise. As companions on the hunt, they want to think for themselves. They are not mere command takers with unconditional obedience, they want to understand why they should carry out an order. Alaskan Malamutes are also used to living in packs. Even if they are loyal to their human, they are generally not one-person dogs.

They are friendly to everyone. As a guard dog, they would therefore be a complete miscast, because they would also be happy about a visit from the burglar. They get along well with children. In their arctic home, they often cuddled with the children and at night the child and dog often warmed each other. Nevertheless, you should of course never leave such a strong dog alone with a child.

With other dogs, sympathy decides whether they understand each other. Basically, they are tolerable, but they do not like to be bullied and they will defend themselves if necessary. Alaskan Malamutes have a strong hunting instinct, which makes living with other animals difficult. An adult Alaskan Malamute exudes a great deal of dignity while remaining playful and enterprising. A flat in the city is not for these dogs.

They love being outside. A garden is therefore almost a must if you are thinking about keeping an Alaskan Malamute. However, this should be secured well and deeply, because Alaskan Malamutes are considered escape kings. Don’t get too attached to your garden plants, as they love to dig and dig in the ground. They are also good at digging under fences.

Purchase of an Alaskan Malamute

Do you want an Alaskan Malamute? That’s understandable, as Alaskan Malamutes are great-looking dogs and, given the right conditions, they make great family pets. But before you look around for a breeder, you should check carefully whether the Alaskan Malamute dog breed is really right for you. Unfortunately, it’s far too common for Alaskan Malamutes to be given up to animal shelters because their owners didn’t do enough research beforehand. Of course, you don’t want that to happen to your dog.

If you have decided on an Alaskan Malamute as your dog breed, then you should place great importance on finding a reputable breeder. Unfortunately, breeders are taking advantage of this breed’s popularity. You should therefore not respond to supposedly cheap offers in classifieds. Even if papers are presented to you, they are usually forged. Loving, responsible breeding has its price. You have to reckon with costs of 1,000 euros to 1,200 euros for a puppy.

In return, you will receive a puppy that has been lovingly raised in the pack and has been cared for. In addition, he is healthy and has all the necessary examinations and vaccinations. A responsible breeder will be there for you and your questions before and after your purchase and will advise you on what to look out for. The easiest way to find a reputable breeder is to go to one of the two clubs that are affiliated with the VDH: the Alaskan Malamute Club and the German Club for Nordic Dogs.