The Akita Inu is an exceptionally beautiful Spitz-type dog. Hailing from Japan, he has traits that most European dog breeds lack today, pride, self-confidence, and a great deal of inner independence. The “Inu” in his name simply means dog, while “Akita” refers to his origins.

History & Origin of the Akita Inu

The Akita Inu takes its name from Akita Prefecture on the Japanese island of Honshu, and it is believed that dogs similar to today’s breed had existed here since at least the 2nd century BC. The origin of the breed and its stages of development are completely obscure. All that is known is that the Akita is simply part of the culture and history of Japan. It has been an official “monument of culture” in the country since 1931 and the Japanese are very proud to be home to the extraordinary dogs. The noble faithful dog is celebrated in many paintings and statues. Up until 1945, it was even forbidden to officially export dogs of this breed from Japan. 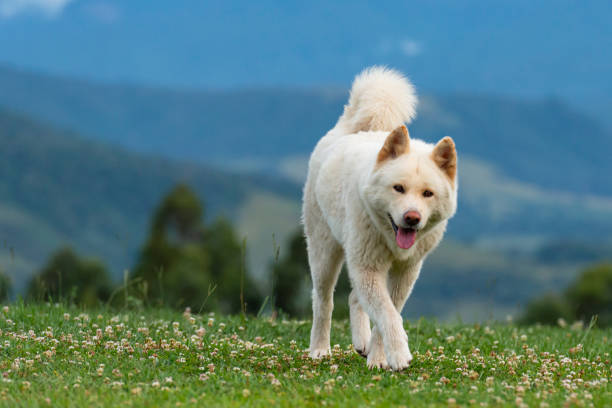 In olden times, the then somewhat smaller Akita Inu served as a hunting dog. The very courageous dog was used, among other things, to hunt bears and wild boar. But he was also suitable as a guard dog, for pulling loads, and sometimes as a sled dog.

It was also used in dog fights, which is why some foreign breeders crossed into large, strong dog breeds such as Tosa Inu and Mastiff in the 19th century, and German shepherd dogs also provided genetic material. As a result, the Akita became larger and stronger but lost some of its pointedness. Two Akita lines emerged, the Akita Inu and the American Akita, which are now separate breeds.

The Akita Inu was gradually bred back to its original appearance through crossbreeding with the Kishu Inu and the Chow Chow. Today the Akita Inu is no longer of great importance as a hunting dog. He is mostly a family dog ​​and companion dog. However, he is also an excellent watchdog and makes an excellent avalanche search dog and man-trailer.

Character and Nature of the Akita Inu

The Aktia belongs to the Spitz-type dogs and its character corresponds to that of all Spitz. They are brave, confident, and independent dogs. Their bond with their immediate caregivers is strong and their loyalty legendary, but they are not always very obedient.

Originally, the Akita was not a family dog, but over the years the dogs living here have adapted significantly and it is quite possible to keep them even if you have a family and children. But they shouldn’t be too small. It is also important that the Akita knows its place in the human pack and is always made aware of it. Male dogs in particular like to get the idea of ​​improving their position and wanting to become “boss”.

Especially at the youthful age of one to two years, the half-strong Akita male likes to rumble around and sometimes tries to growl and show his teeth. Luckily this settles down later and older Akitas are usually much more relaxed and friendlier. They are also very good watchdogs and go through thick and thin with their people.

Outspoken cuddly dogs are only very rarely found in this breed, although they are so affectionate. Experts speak of “great individual distance” here.

At best, the Akita is indifferent to strangers but sometimes bitchy. His individual distance is sometimes several meters. This means the radius that strangers should not enter. This breed does not have the “will to please” which is part of the nature of most dogs.

Behavior around other dogs and pets 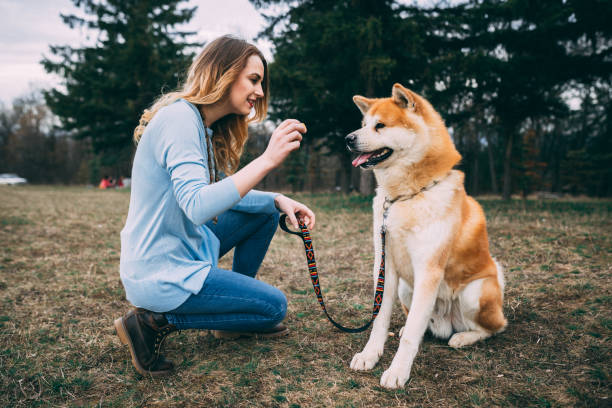 Akitas don’t usually like strange dogs either. Therefore, one should also make sure that unknown conspecifics do not fall below the individual distance or that getting to know each other is initiated slowly and concomitantly. If he still plays with all the other dogs as a puppy, the adult dog clearly shows which strange dogs he likes for some unknown reason and which he should avoid.

It is similar to other pets and the Akita is not a “cat friend” either. Of course, with early familiarization and socialization, they can also harmonize with each other. However, if you consider his character and treat your Akita Inu with love, respect, and a lot of consistency, he will still be a great companion and a good family dog. Once you have found access to him, he will also work voluntarily, because he is a very intelligent and capable dog. Pressure and hardness, on the other hand, only make him stubborn and some even aggressive.

The Akita Inu is a dog that likes to go for a walk, but its urge to move is not excessive. He is also not suitable for dog sports, especially for sports that require consistently good performance. His stubbornness means that he only participates when he feels like exercising himself. He also likes to just lie in the garden or house and doze off.

Because the Akita Inu were used as hunting dogs, they still have a passion for hunting in their genes today. Therefore, 90 percent of these dogs cannot be off-leash. If they smell an interesting lead, they’re gone – whoosh – and won’t come back anytime soon. With such specimens, the only thing that helps is a securely fenced area, your own garden, or a trip with a tow line. But there are also quite a few Akitas who are not interested in-game or in tracking. You have to find out for yourself to what extent you can safely unleash your own Akita.