The Airedale Terrier is one of the best-known terrier breeds in Germany, Switzerland, and Austria and, next to the Fox Terrier, it is certainly the most popular. He is often referred to as the “king of terriers”. His robustness, intelligence, and ability to learn but also with his friendly nature characterize him.

In the English county of Yorkshire there is a river called the Aire and here and on its tributaries the Wharfe and Calder are believed to be the home of the Airedale Terrier dog breed. It was probably created by crossing the English Terrier, the Otterhun, and the Gordon Setter. English farmers and hunters from the Aire Valley are said to have bred them in the 19th century for hunting, but also as a herding dogs and for dog fighting, which was very popular at the time. The first representatives of the new breed were called “Waterside” or “Bingley Terriers”. In 1886, the English Kennel Club officially recognized the breed as the Airedale Terrier. 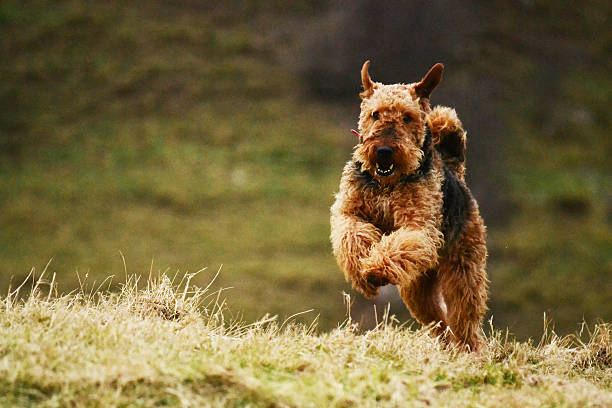 One of the defining characteristics of all terriers is their temperament and the Airdale Terrier has plenty of power too. He loves work and play, loves to run, and wants to be with everyone. This dog is also alert, courageous, and intelligent. Unlike some other terrier species, Airedale Terriers are not aggressive and stubborn but are generally very patient. They rarely bark and are not aggressive, although they are very alert. In addition, they combine great dignity and an innate balance in their character. They generally react very calmly and peacefully to unfamiliar and strange situations and keep their nerve even in the hustle and bustle. In summary, the Airdale Terrier is a robust and persistent, good-natured, and nice family dog ​​that belongs to the “easier to train” dog breeds. Nevertheless, he is also a bit of a typical terrier and tends to play “stupid” sometimes in order to get his way. Friendly consistency in training is therefore also important for the Airedale Terrier.

The playfulness, robustness, and balance make the Airedale Terrier a very suitable dog for families with children. Although he is quite large for a terrier, he can still be walked by children. Precisely because he loves to move so much, he also plays all children’s games with great enthusiasm and doesn’t mind an accidental nudge or nudge. Nevertheless, it is of course also necessary to carefully get the child and Airedale used to each other. Smaller children in particular need to learn how the big dog reacts and why it does it. They also have to understand that they are dealing with a living being and not a toy, they have to take responsibility. If this works, the children and the dog will soon become best friends who will have a lot of fun together.

When dealing with strangers, the peaceful and confident Airedale Terrier is easygoing. He is by no means a “postman scare” and does not bark at everyone who comes past the garden gate. But he will see and hear him and report if a stranger enters the property. Here, too, he maintains his balance.

With other dogs, the Airedale Terrier is self-confident but still peaceful as long as he is not really provoked. Dogs of this terrier breed are only rarely seen tugging at the leash wildly as soon as a strange dog comes into view. They show poise and dignity even towards small barkers, and they are not afraid of larger conspecifics either.

Behavior with other pets

How the Airedale Terrier gets along with other pets such as cats, guinea pigs or budgies depends primarily on how they are socialized. If he knows other pets from puppyhood, he will definitely tolerate them. But even the older dog can get used to his non-specific animal companions with patience. With the Airedale, the balance and composure of the breed also help here. 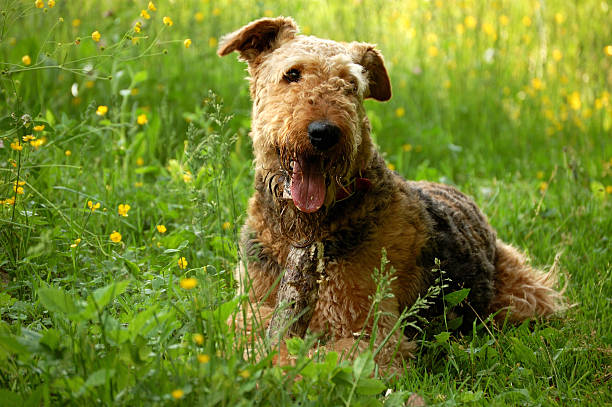 As previously mentioned, the Airedale Terrier has a great need for exercise and should be exercised to keep him relaxed and peaceful at home. He really likes dog sports and boisterous play, but he also loves long walks and likes to ride his bike. Therefore, the breed is very suitable for sporty and active people. On the other hand, like any dog, he is very adaptable and will also be able to adapt to people who do not have such a great urge to move.

You should plan at least two and ideally three hours a day to keep your Airedale Terrier busy.

Like all terriers, the Airedale was originally bred for hunting and therefore has a certain hunting instinct. However, he is no longer a special hunting dog but an all-rounder who also has completely different characteristics. His hunting instinct is generally not so strong that you cannot unleash him.