Before you buy a puppy, find out all you need to know about the breed and pester the breeder of your choice with questions. A reputable breeder will be happy to answer your questions.

The American Staffordshire Terrier was a popular dog fighting dog in the early 1800s and was bred specifically for it. Insensitivity to pain, tenacity, and strength were the breeding goals. After dogfighting was banned, the AmStaff advanced to become a watchdog and family dog. Stabby, a famous war dog, was even promoted to the rank of sergeant for his services. During World War I, the American Staffordshire Terrier, then known as the American Bull Terrier, became America’s national dog. 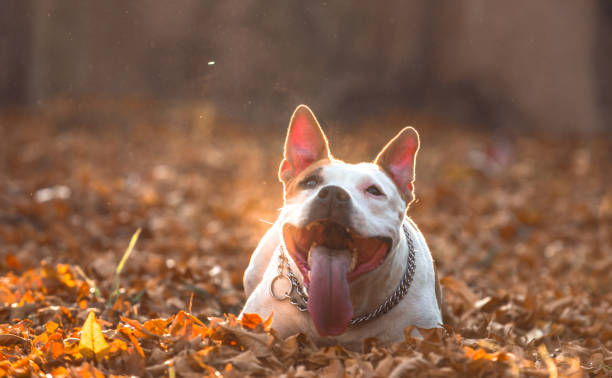 The Amstaff is very devoted to its owner. He guards his territory and is ready for consistent defense in an emergency. Very good socialization lays the foundation for a family-friendly four-legged friend. The upbringing must be loving and consistent. Like all terriers, the American Staffordshire Terrier has a mind of his own and can be stubborn. Conflicts can always arise when dealing with other dogs – it is important to intervene at an early stage.

Visiting a dog school is strongly recommended. The powerful terrier needs sufficient exercise; dog sports such as agility are ideal. It is also an ideal companion when jogging or cycling.