Danish entry regulations stamp the American Bulldog as an unwelcome dog breed. Bavarian and Hessian laws assume that this dog is more aggressive and dangerous.

And every day people give the American Bulldog a wide berth – they see it as a fighting dog because of its appearance and suspect danger. The owner who decides to offer cohabitation to a dog of this FCI non-recognized breed will still have a very family-focused pal by their side.

Litters of American Bulldog bitches have only been known in Germany since 1994. The roots go back much further. With the emigration of English families to America in the 19th century, English Bulldogs also got there. They form the breeding basis for strong working dogs. The bull driver or bulldog, as the American Bulldog is also called, is a dog with many talents in the American orientation. He is indispensable as a cattle driver, guard of house and yard, or when hunting. He drives the farmers’ stubborn bulls without injuring the valuable animals. Skill, speed, and courage are characteristics of the original dog.

For its breeding, the development of suitability for use is in the foreground; looks are irrelevant. Several working lines show this strikingly. American Bulldogs can be found large and heavy as well as the smaller beefy breeds or wiry representatives with an athletic streak.

The size varies between 53 and 66 centimeters at the shoulder and weighs from 30 to almost 60 kilograms. Bitches are noticeably smaller and lighter. Equally varied are the colors of the coat of the dog breed. The UKC (United Kennel Club), a dog breed governing body based in the USA, only excludes a black and blue colors and the tri-color coat color. A completely black mask will also not be accepted.

A white with and without markings often predominates. The catch of the animal is strong. The hanging ears and the comparatively small eyes are striking.

What all American Bulldogs have in common is the easy-care texture of their coat. Short, dense, fitting, and firm to the touch. Removing dead hair once a week is enough for proper grooming of the coat.

He is very fond of people and tolerant of children, the interaction between man and animal is a must for the attitude of the sensitive dog. Nobody does him justice if the companion is mentioned in the same breath as dog breeds that are classified as dangerous. In the USA, the use of the American Bulldog as a hunting assistant in wild boar hunting is now the exception. Mostly the four-legged friend lives there as in other countries as a family and companion dog.

Rather, a good dose of equanimity and self-confidence give him the necessary calmness to “sit out” situations that can cause other races to act in an undesirable manner. He also shows this composure within the dwelling of his pack, constant barking remains an expression of insufficient utilization.

The American Bulldog is as versatile in character as its appearance shows. It may well be negligent to generalize here. A dog of this size and strength always places certain demands on the person leading it. 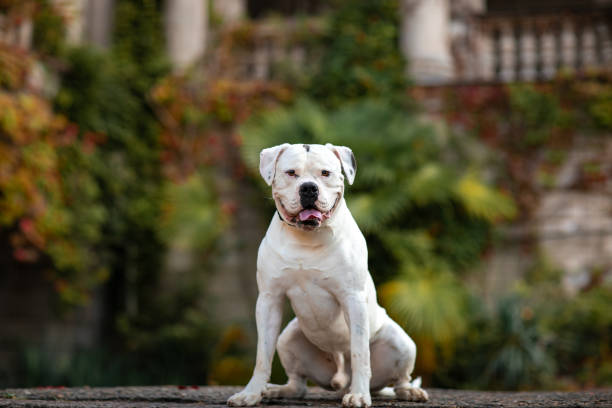 The soft dog core in the supposedly hard shell wants to be trained with sensitivity. The American Bulldog quickly exploits weaknesses and inconsistency has negative consequences. As a puppy and young dog, the mental late developer shows downright clownish traits; it’s hard to blame him. In many cases, their owners remember more or less destructive escapades of their pupils.

Coming together with as many animal and human contacts as possible gives him security. A variety of different environmental stimuli provide further assistance.

Willing to learn, active and spirited, the four-legged friend accepts challenges for the head and its powerful body. Whether in the dog school, at the companion dog test, or in the daily collective with its people, the family dog gets involved. Play, exercise, and activity give meaning to his life – through the drive to play and prey, when tracking in unfamiliar terrain, and when training to become a rescue dog.

There is no such thing as an American Bulldog! If one loves his peace and physical contact with his people, the other lives out his hunting instinct. Especially in the second phase of life, male dogs occasionally show unpleasant dominance behavior towards strange dogs. With the informed, experienced and confidently leading person at his side, these remain trivial episodes.