The Balinese is a medium-sized pedigree cat with a half-length coat that enchants with its happy nature and grace. Here in the profile, you will learn everything about the history, the character, and the care of the intelligent and playful pedigree cat.

History and Origin of the Balinese

Even if the name Balinese cat suggests that the beautiful pedigree cat could come from the island of Bali or at least from Indonesia, the noble animals originally came from Thailand to the USA and England. Siamese cats were imported into England and the United States around 1800, with some animals thought to have had a longhair gene. Initially, these were referred to as “long-haired Siamese cats”. The long-haired Siamese cats were not used for breeding because they did not meet the breed standards of the Siamese cat. Correspondingly, Siamese cats with a long-hair gene were either killed or adopted as pets. It was not until 1928 that the species are known today as the Balinese cat was presented at a cat exhibition. 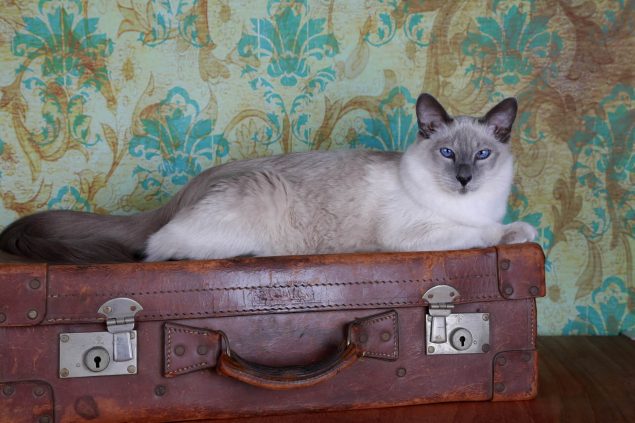 Targeted breeding of the Balinese cats was only promoted in the 1950s. In the 1960s and 1970s, not only did the Balinese breed become more popular, but only animals with the classic point coloring of chocolate, seal, lilac, and blue were allowed. At the same time, the Cat Fanciers Association introduced the term “Javanese”, which is still used today for red, tabby, cream, and tortoiseshell Balinese. Over the decades, the appearance of the Balinese cats has changed significantly, because the physique has become significantly slimmer, the triangular head shape is more pronounced and the ears are larger. Balinese kittens with the original appearance have become very rare today because only very few breeders still rely on the original form.

In terms of character, Balinese cats present themselves as a particularly interesting breed with typical traits of oriental pedigree cats. The Balinese cat is considered to be particularly intelligent and learns little funny tricks effortlessly. This is already evident with Balinese kittens and it is also possible to teach the Balinese commands such as “Bring” or to get them used to the leash without any problems, in order to allow them controlled freedom if there is no secured garden or balcony.

In addition, the Balinese cat maintains a loving relationship with its people and also likes to be cuddled. It doesn’t matter whether on the lap in bed or on the sofa, loving cuddles are not only welcome with Balinese kittens but also every adult Balinese loves to cuddle and enjoys the attention. But even hustle and bustle doesn’t bother the Balinese and so the pedigree cat gets along very well with other animals and children, even though it is actually one of the more dominant pedigree cats.

The Appearance of the Balinese

Muscular and yet slim, Balinese cats appear very delicate and supple in their movements. With a weight of three to four kilograms, Balinese cats are among the medium-sized breeds. Balinese tomcats can weigh a little more and weigh around five kilograms.

While the body, face, and character are similar to the original Siamese cat, the coat length differs significantly, which is particularly evident in the Balinese’s bushy tail. Since breeding began, however, the Balinese has changed somewhat, and with its elongated body and triangular face, it has adapted to the modern variant of the Siamese cat. If you want to buy Balinese cats, you will only find a few breeders today who breed Balinese cats in their original form.

Most cat breeders offer cat lovers the modern form of the Balinese cat, which has a narrower physique and a more wedge-shaped head. A special feature of the Balinese cat is its bright blue eyes, which look particularly lively and lively. Balinese are bred with seal point, blue point, chocolate point, or lilac point coat colors, but uniquely beautiful blue eyes are present regardless of coat color and are characteristic of the Balinese’s appearance.

If you want to get Balinese cats or Balinese kittens, you should be aware that Balinese cats are very affectionate and that intelligent pedigree cats want to be kept busy. The need for grooming is also not to be underestimated. If you are thinking about buying a Balinese cat, you should only do so from a reputable and responsible breeder.

Responsible breeders ensure that Balinese kittens are raised in the family and are well socialized. In addition, if you want to buy Balinese cats, you should know that good breeder do not give Balinese kittens to a new home before the end of the imprinting phase. If you want to buy a Balinese cat, then do not respond to advertisements from hobby breeders who offer pedigree cats without papers for sale. You should only buy Balinese kittens from an experienced breeder who is a member of a breeding club. Since experienced breeders only give kittens into loving hands that have been checked by a vet and found to be healthy, you have to reckon with costs of several hundred to thousands of euros for a Balinese kitten.

If you would like to give a full-grown Balinese cat a new home, then with a bit of luck you can also find something in animal shelters and animal protection associations. Here, too, you have to reckon with a nominal fee.