The Savannah cat is an exotic cat breed that resulted from a cross between the African Serval and a Siamese cat. Here in the profile, you can find out everything about the origin, nature, and attitude of the young breed.

History and Origin of the Savannah Cat

The Savannah cat was initially not an intentional breed, but came about by chance. In 1986, serval breeder Judee Frank borrowed a stud from Suzi Mustascio to mate her serval cat. While the tomcat was housed with a Siamese cat, the cat was mated and the first F1 hybrid was born. As early as 1989, Mustachio began breeding with this hybrid cat and the first F2 hybrids emerged from it. She named the new breed the “Savannah” after the serval’s original habitat. In the early stages, breeders bred the Savannah cats to Bengal, Egyptian Mau, Ocicat, Oriental Shorthair, Serengeti’s, and Maine Coon. Today, according to the guidelines of TICA (The International Cat Association), only the breeds Egyptian Mau, Ocicat, Oriental Shorthair, and Domestic Shorthair are allowed. 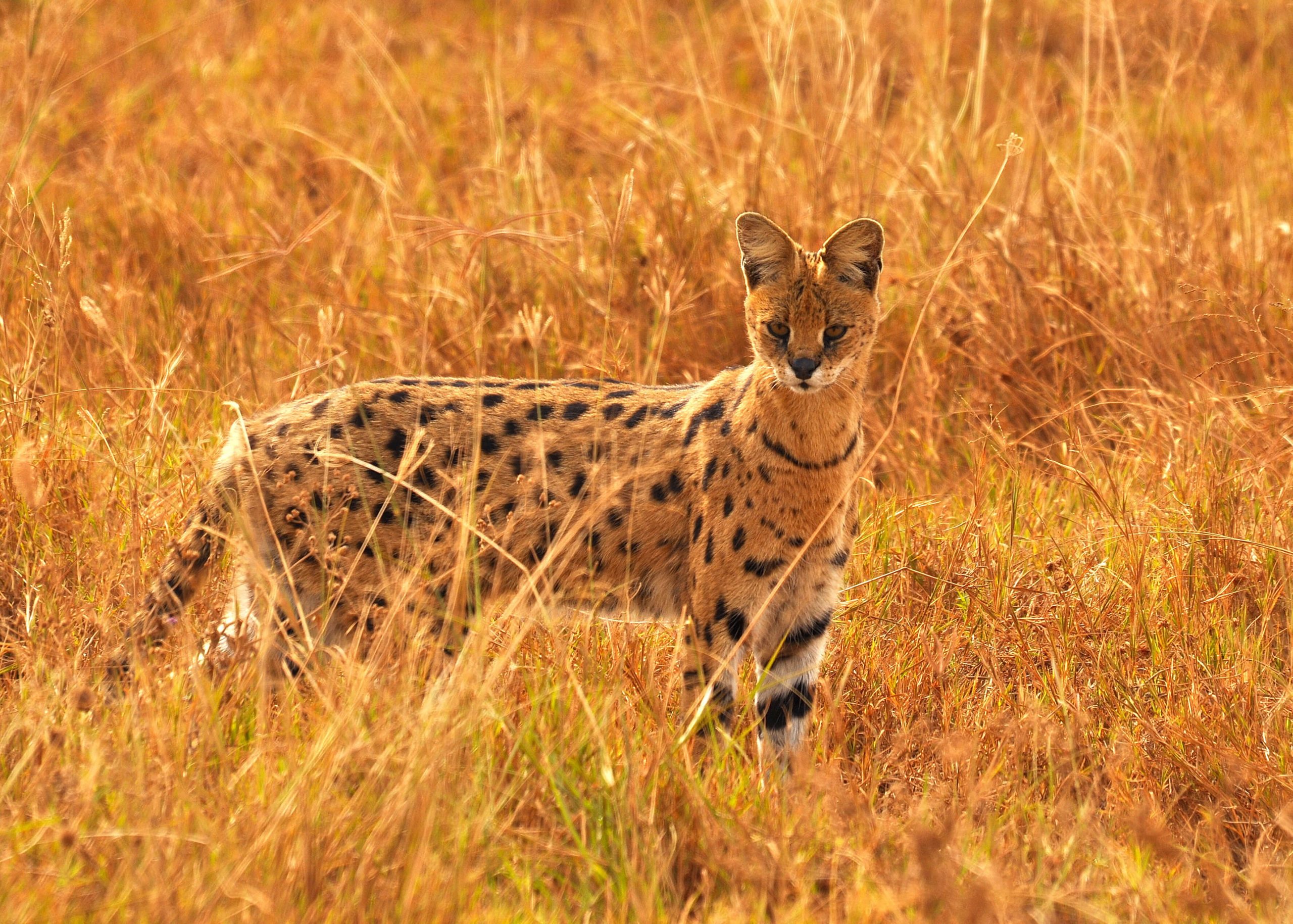 The nature of the Savannah cat can vary greatly, depending on the proportion of wild animals. As a rough guideline, the breed only behaves like a normal domestic cat from the 5th generation (F5). In the earlier generations, the wild animal can be very prominent. The F5 Savannahs are lively, social animals that get along well with other pets. Although they are very active and self-confident and also hiss more often than ordinary house cats, they hardly differ in their attitude.

Most representatives of the breed are very attached to their people and love to be stroked. Similar to the serval, some Savannahs will raise the fur on their backs and tails when they are pleased. Ideally, you’ll keep an equally spirited mate so the Savannah doesn’t feel lonely or bored. If they don’t get enough attention, the wild cats can snap gently to be the center of attention again.

The Appearance of the Savannah cat

The Savannah cat is a tall, slender breed of cat that tends to be larger than other domestic cats. In general, it should be the reduced image of a serval and therefore also has fur that is reminiscent of the wild cat. It is usually colored beige to gold and has a spotted, darker pattern. In addition, the cats have a delicate and narrow heads with a relatively long necks. The average weight of eight to ten kilos and the shoulder height of up to half a meter makes the breed one of the largest domestic cats in the world.

Before getting a Savannah cat, you should be aware that they are considered to be the most expensive domestic cat breed in the world. Depending on the generation, you pay between 1,000 and 10,000 euros for a kitten. Further difficulties can arise, especially when buying a cat of the F1 to the F4 generation. The animals are not particularly easy to keep and are subject to the Washington Convention on Endangered Species. So if you want to import a cat from the USA or another non-EU country, there are a lot of requirements such as housing and enclosure permits. 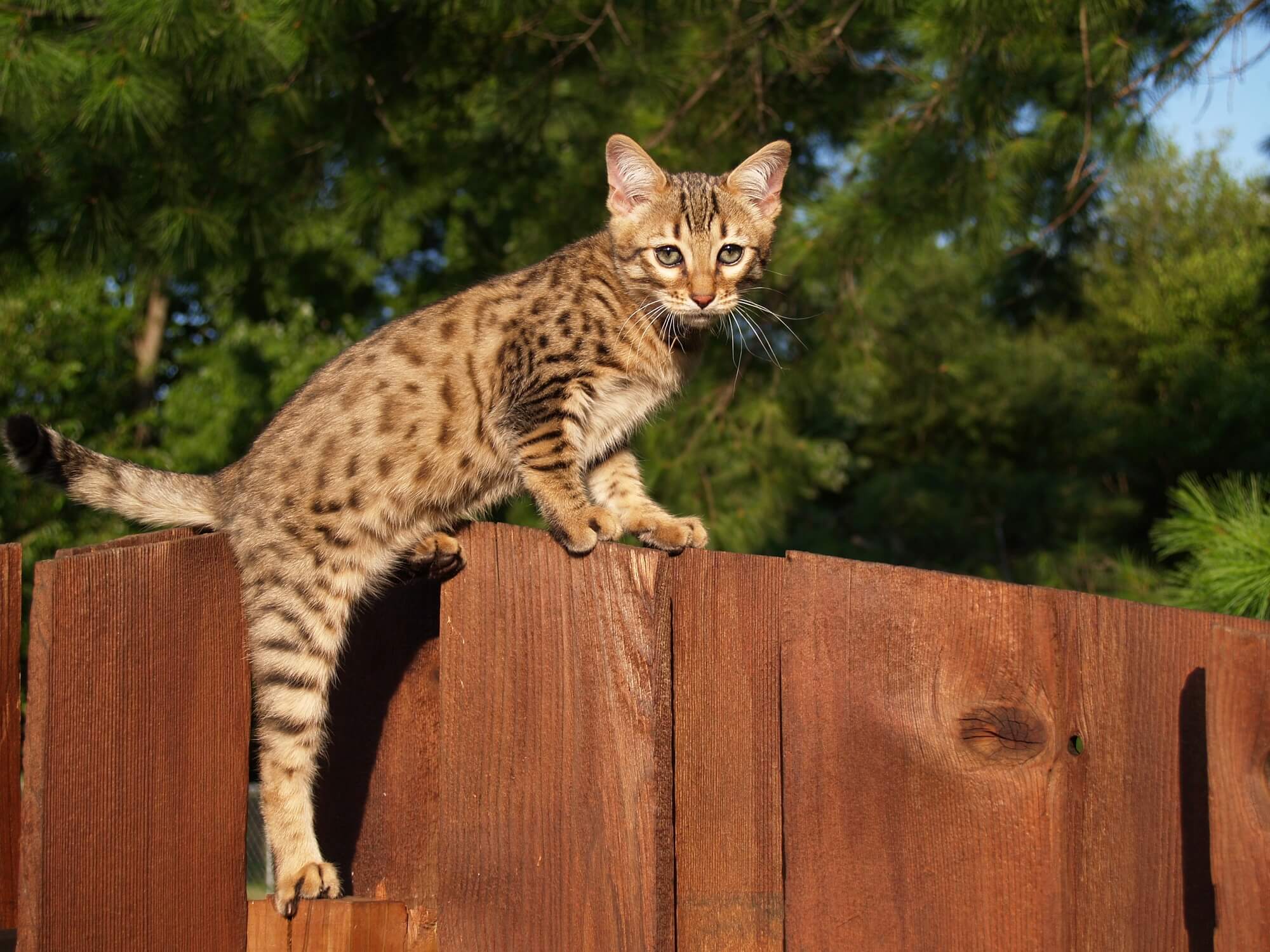 The Savannah cat is a significantly more adept hunter, jumper, and climber than other domestic cats. If she is kept as an indoor cat, she needs an above-average amount of space as well as varied and robust climbing opportunities. Alternatively, the big cat is also happy about an outdoor enclosure or a secured garden. With a little patience and a lot of practice, you can also teach the Savannah to walk on a leash. Keeping them outdoors is not advisable, especially for the F1 to F4 generations, as they are very valuable and also excellent hunters.

How much activity does the Savannah cat need?

Due to their enormous agility and high level of intelligence, the Savannah cat needs a lot of attention and activity. She doesn’t particularly like being at home alone and prefers to follow her owner around the house wherever she goes. She likes to be the center of attention and will confidently let you know when she wants to be employed. A particularly exciting activity for the Savannah cat is playing with water or taking a bath in the bathtub. In fact, some members of the breed are so fond of water that they will follow you into the shower. The clever cats also learn to fetch toys with joy and run impetuously through the whole apartment.