The Basschshund is a cross between two famous dog breeds: Basset Hound and Dachshund. These are very good-natured dogs that get along well with any family members, even the smallest ones. This is a new designer breed, but it has already managed to fall in love with many. The main feature of designer pets is the combination of the best qualities of their parents, who belong to different breeds.

So let’s get to know this breed! 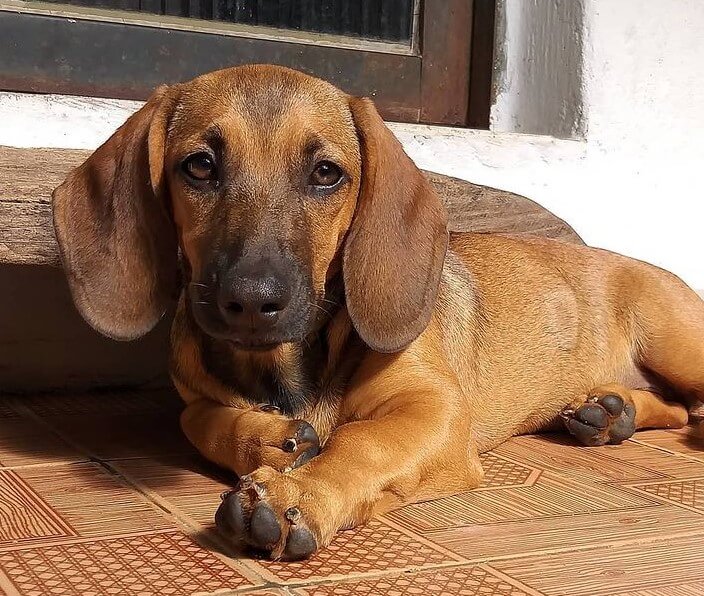 The Basschshund is a modern breed, so documentation of their history is minimal. But having considered the history of the parent breeds, we can find out where the pedigree of this pet comes from.

The history of the Basset Hound breed dates back to the Middle Ages. With the development of feudal society, hunting gradually turned from a trade into a refined pastime of the nobility, for which it became fashionable to keep and breed special hounds. By the 17th century in France and Great Britain, where the Basset was very popular, there were up to 12 species. Each kennel owner strove to breed his own subspecies. These dogs differed both in appearance and specialization. The ancestors of the Basset Hounds were used at that time both for hunting small games and searching for truffles. The Great French Revolution proved to be a social turning point not only for the French but also for the Basset population in France. Dogs were associated with the ruling class, and the rebellious populace destroyed them along with their masters. It helped that, along with the “democratization” of society, hunting on foot, available to a greater number of people, gained wide popularity. For her, slow but tireless and not losing track of the Basset Hounds were the perfect dog. But most of the breed’s varieties have been lost. The famous Basset Hounds were bred in England already in the 19th century. The breed has become more massive, the ears have lengthened, wrinkles have appeared. In the same place, in 1870, the documented selection of the breed began. At the end of the 19th century, the breed standard was approved, the last additions to which were made in 2010.

Hunting is the oldest human occupation, but it was difficult for him to cope with cunning and much more adapted to survival in the wild animal without helpers. And then the dog came to the rescue. In order to drive a swift hare, Greyhounds were needed, to bring a duck shot in a swamp – Spaniels and Retrievers, and for hunting animals that can hide in deep holes – Dachshunds. These adorable short-footed dogs are the oldest burrowing breed and one of the oldest hunting breeds. If you look closely at the ancient Egyptian bas-reliefs with hunting scenes, you can see images of dogs with elongated bodies and short legs. Although these ancient Dachshunds were nevertheless taller than the current ones, and with erect ears, so they rather resembled modern Corgis. Of course, now it is impossible to say with certainty whether their blood flows in the veins of all the familiar Dachshunds or not, but still, this was the first attempt to breed a dog capable of chasing an animal in a burrow. But the Germans took seriously the breeding of a universal burrowing dog from the beginning of the 18th century. Dachshund acquired its modern look by 1814. Although, of course, the selection did not end there. Later, the short-haired Dachshund was crossed with the Spaniel, having received the long-haired variety, and with the Terrier – this is how the wire-haired subspecies was bred. Also, breeders experimented a lot with colors. 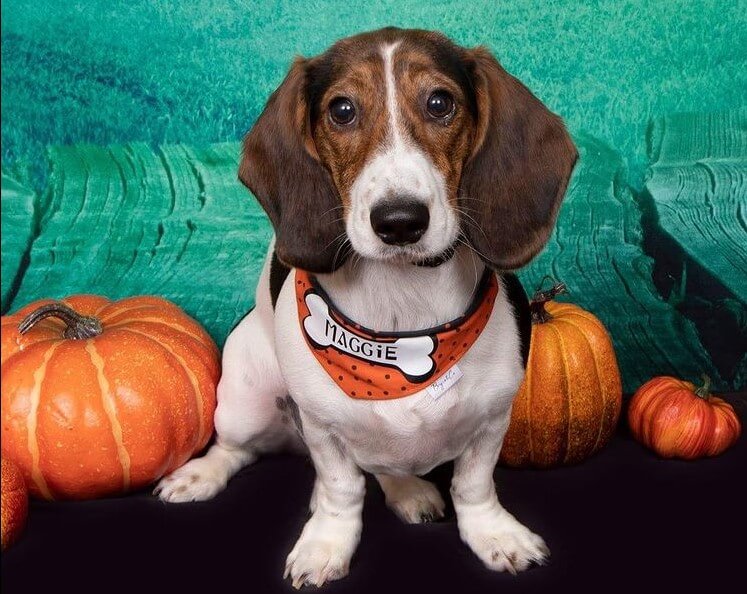 Basschshund will reflect characteristics of both parents, although it is not always predetermined which traits will prevail. This dog often has a strong, muscular body of medium size, and the males are sometimes larger than the females. Their coats are gray and white, chestnut, black and brown, short and moderate to high shedding. The ears are long and flexible. Their legs are short and their bodies are long. Body size will depend on which Basschshund parent is the most dominant. Their muzzles are long and rounded at the end. The nose, eyes, and lips are usually dark in color. Their eyes are round, with a sweet and loving expression. 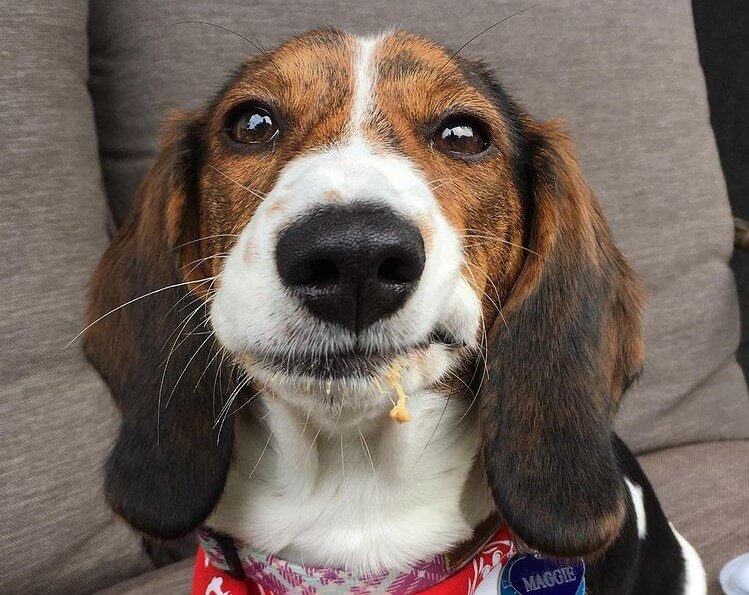 The temperament of the Basschshund is a combination of Basset Hound and Dachshund’s character. Basschshund is very attached to his family and owner, and, despite his short legs, is ready to follow him to the ends of the world. These are very intelligent animals. The more sweet and good-natured creature still needs to be looked for. Generally, Basschshunds treat children well if they know how to behave with a dog. In this regard, very small children may possibly harm the pet. It is a wonderful companion for the whole family and the best friend for a lovely host. Basschshund’s parents are hunters, so these dogs have hunting instincts, which is why they like to dig holes. Especially if the ground is loose and flowers are planted in it. Basschshunds can be very single-minded in begging for food, including from your guests. Sometimes they do not know the measure in food and can gain excess weight, which should be avoided. 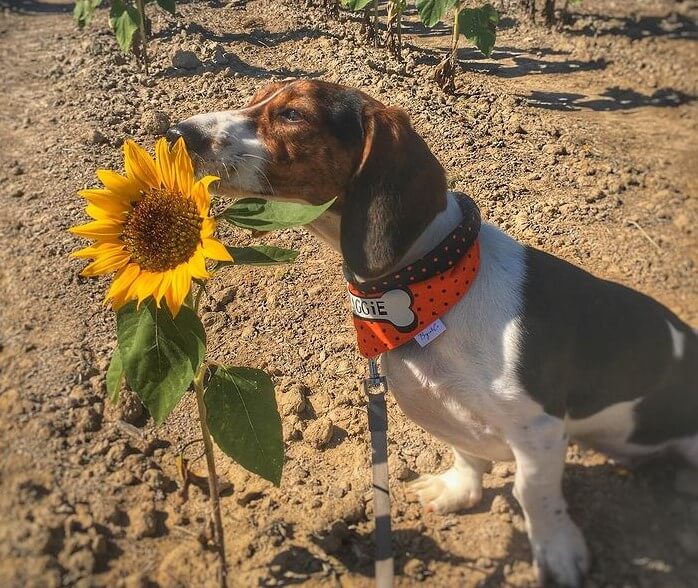 The Basschshund sheds, so it needs to be brushed weekly with a hairbrush or grooming mitt. Remember to trim its nails three times a month, and always keep your pet’s ears and eyes clean. Bathe your dog once or twice a week, or more often if he has a habit of sleeping in the same bed with you. 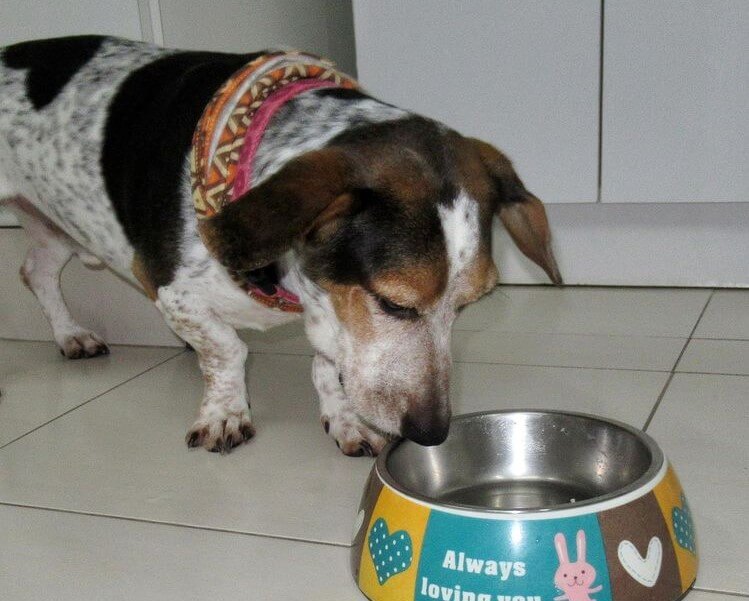 This designer breed is prone to weight gain, so it is important to feed your pet in a balanced way, calculating calories based on his physical activity and age. In the first seven to ten days, the puppy should be fed with the same that he ate at the breeder. Then meat, fermented milk products, quail eggs are added to the diet. It is important for puppies, especially in winter, to get enough vitamin D with food. How to properly introduce it into the diet, it is better to consult a veterinarian. Small puppies eat up to six times a day. The number of feedings is reduced as the dog grows. After nine months, the dog is fed twice a day. For adult dogs, fasting days are often practiced once a week or two.

The pet’s diet can be built on ready-made feed, or on natural food. Some owners prefer to give dry food in one feeding, and natural food in another. When choosing factory-made feed, give preference to premium-class products, the main share of which is meat.

If you decide to cook for your dog yourself, it is important to include in its menu:

Basschshunds have a sensitive stomach, they are categorically prohibited from spicy, salty, smoked, and fatty ones. Do not give the dog long bones and fish with bones. The best indicators of proper nutrition are the healthy coat and skin of the animal and its active behavior. 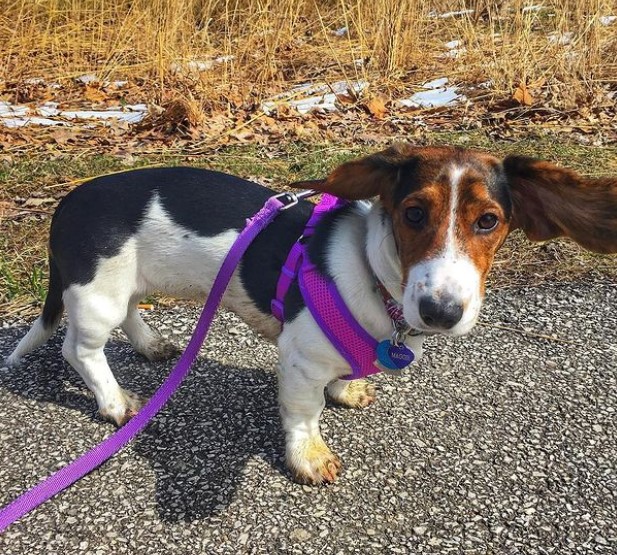 Basschshund is a healthy dog. Unfortunately, there are a few health concerns you should be aware of before purchasing a Basset Hound / Dachshund cross: 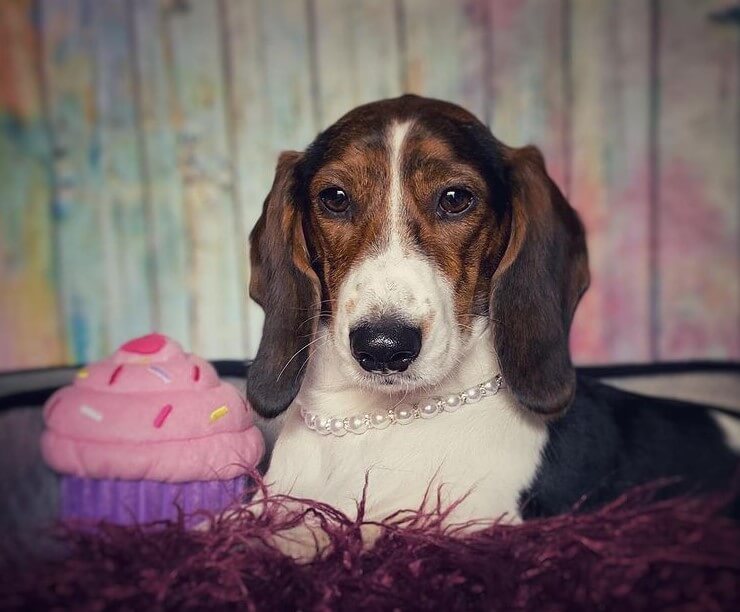 Basschshund is a kind and attentive dog to all people, gets along well with children and therefore is suitable for large families. Early socialization is very much needed by Basschshunds. This sweet and kind animal will fill a person’s life with joy and kindness. A dog with an agreeable character and aristocratic manners does not cause other emotions.