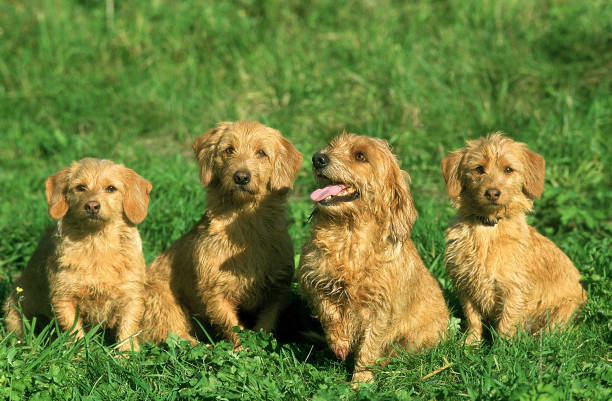 Like the landscape in which it lives, the Basset Fauve de Bretagne has a robust appearance. Its fur is rough and hard, not particularly long, but very dense to protect it from the strong winds there. It is neither woolly nor curly. The coat may be wheat-colored to reddish blonde or brick red. It happens that within a single litter, the offspring have both different colors and different hair lengths.

Overall, the appearance of the Basset Fauve de Bretagne is characterized by a strong, broad chest, deep dark eyes, and lop ears tapering downwards. Its tail is sickle-shaped and of medium length.

In the meantime, the Fauve has found more and more followers outside of France. He is particularly popular with hunters because he is said to have an above-average hunting instinct. It is mainly used in very small packs of little more than 5 dogs.

When training these animals, particular value is placed on obedience, and the most obedient animals are mainly used for breeding since observing commands is essential for a successful hunt. The Basset Fauve de Bretagne has amazing stamina and is ideal for use in dense undergrowth. In his home country of France, he is therefore mainly used as a hunting dog.

But he is also popular as a family dog, and especially in Germany, he is seen more and more frequently as a companion for families with children. He is patient without lacking temperament. His high stimulus threshold ensures that he is particularly tolerant toward children.

But he is also appreciated for his lovable cheerfulness and indestructible robustness. You can also keep him very well together with other dogs because he is very compatible. This breed is also not very susceptible to diseases and has a surprisingly long life expectancy.

The character of these dogs is reflected in a high level of intelligence, which – combined with a great deal of joy in learning – makes them an ideal companion for agility. If these dogs feel comfortable in their family – and they almost always do, they are the ideal house dog or family dog. Aggressive behavior is almost alien to them, they love to be praised and are happy about any form of recognition.

Many Fauves show a strong tendency to sleep a lot, yes, they seem like real late risers. However, this should not hide the fact that they like to move. They are not suitable for “couch potatoes”. On the contrary: the Fauve is happy to do something outdoors with his family; you can jog with him, go on bike rides or play Frisbee with him. You can hardly find a family dog ​​that is easier to care for.