The Basenji is classified in FCI Group 5: Pointed and archetypal and has its origins in Central Africa, particularly today’s Congo. His name comes from the Bantu language and translated means either “native (of the bush)” or simply “bush”.

In the German-speaking world, it is therefore also known as the Congo bush dog. The breed standard places the ideal height for males at 43 cm, and for bitches 40 cm is the optimum height. The desired weight should be between 9.5 and 11 kg. The Basenji has a short, smooth coat with fine hair.

The Basenji is one of the oldest breeds of dogs. Basenji-like dogs are depicted on ancient Egyptian reliefs found in the tombs of the pharaohs, resting at the feet of the pharaoh. Like its larger relatives, the pharaoh and the Ibiza dog, the Basenji descends from the so-called pariah dogs. These are primitive domestic dogs from the tropical regions around the world that were allowed to live within human settlements but were not fed and had to fend for themselves. 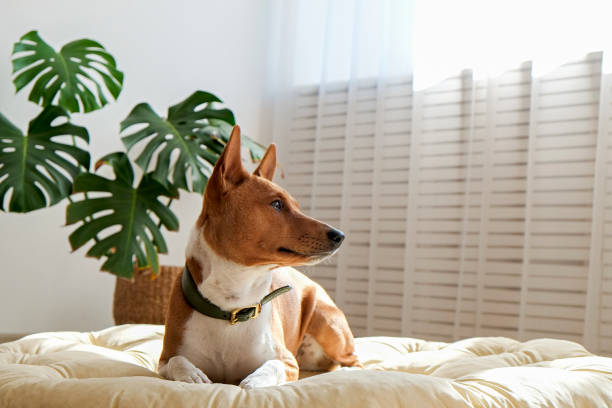 So they fed not only on the game they hunted themselves but also on human waste and carrion. After the Egyptian high culture had sunk, individual tribes throughout the Congo adopted these dogs. They used the Basenji for hunting, as it not only has a very keen eye but can also scent at a distance of 80 m. Even today it is highly valued by the natives as a hunting dog for pointing and rummaging around the small game.

In addition, the Basenji is a mute hunter, which is why a small bell was often attached to him. Towards the end of the 19th century, the breed was then discovered by West African explorers in Central Africa and brought to Europe to start their own breeding there.

Unfortunately, the first specimens succumbed to distemper as the Basenjis had no natural defenses against the disease. It was only in 1937 that the English breeder Mrs. Burn succeeded in producing the first Basenji litter sired in England with the breeding pair “Bongo of Blean” and “Bokoto of Blean” imported from the Congo the year before.

It was also thanks to Mrs. Burn that the Basenji got its current name (see above). When the young animals were exhibited for the first time in the same year, the rush of the public was so great that the police had to be deployed to guide the curious crowds past the boxes with the Basenjis.

In the USA, successful breeding only began in 1941, and as early as 1943 the AKC recognized the Basenji as an independent breed. The Basenji is an extremely unusual dog. His gait resembles a horse’s trot. He does not bark, but instead expresses his state of mind with either a growl of displeasure or a single high-pitched bark of delight, commonly referred to as a “yodel.” The paws are also used for communication. In addition, the Basenji is an extremely clean dog, it does not smell and as a cat, it keeps its fur clean with its paws and tireless licking.

The Essence of the Basenji

So while he has qualities that make him ideal for an apartment dog, he’s certainly not a dog for everyone. If you treat him too harshly, he will very quickly become shy and stubborn. 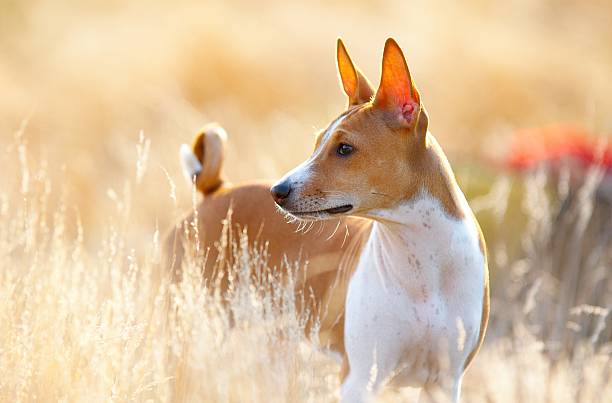 He also absolutely needs a strong connection to the family, because if he is left alone for too long, he will look for his own occupation and that can quickly degenerate into a rage for destruction. Keeping it with other dogs can also be problematic, as the dogs will fight for the lead position.

Expect plenty of barking and bickering, at least until the pecking order is established. Nevertheless, the Basenji actually has a lively and happy nature. The video gives you an acoustic impression of the typical “yodeling” of a Basenji.

Although he can be very shy around strangers, he is a people-friendly dog and devoted to his family, yet not overly pushy. He is clever and docile but needs understanding and loving treatment since his willingness to obey is usually not very well developed. His cheerful and playful character makes him an excellent playmate, also for children.

Since he has a strong hunting instinct, he needs a lot of space to move around, daily exercise, and activity. If he lacks this, he can very easily put on weight. Nevertheless, he is extremely ambitious as a racing dog. Many characteristics of the pariah dogs are still present in the Basenji: the alert nature, the wrinkles on the forehead, and especially the bitch’s cycle that only occurs once a year.