The Bernese Mountain Dog is a very imposing and impressive dog that is at the same time good-natured and friendly but also confident. For many lovers of large dog breeds, he is the outdoor dog par excellence. Nevertheless, he is also a very lovable, well-behaved, and adaptable housemate.

His ancestors served the Swiss herdsmen, the herdsmen, but also the farmers of the region as watchdogs, draft dogs, and herding dogs. However, these ancestors, an ancient farm dog breed, bore little resemblance to today’s mountain dogs. Only the stocky, strong physique and the broadhead have been preserved. In terms of colors, everything was possible in the past. However, the court dogs of the Bern region were often tricolored. namely black, brown-red and white. After the hamlet and inn of the same name Dürrbach near Riggisberg, the three-colored mountain dogs were first called Dürrbächler. 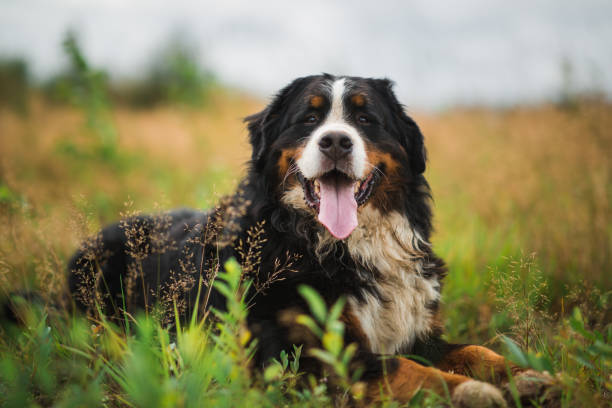 In 1907 several dog breeders joined forces and began pure breeding the breed. The new breed was given the name “Berner Sennenhund”. The “Swiss Mountain Dog Association for Germany e.V.” has existed for over 90 years. Its largest national group is in Bavaria, there are a total of 13 national groups.

As former farmers and shepherd dogs and just like the various breeds of old German herding dogs, the Bernese Mountain Dogs were very versatile. They guarded lonely farmsteads, tended cattle, sheep, and goats, and pulled handcarts, carts, or sleds. Today, representatives of the breed are only very rarely selected because of the utility characteristics that were once valued. Most Bernese Mountain Dogs live as family dogs. Their love for children is just as proverbial as the loyalty they show to their human pack. They are also used as companion dogs, therapy dogs, or man trailers.

The Character & Essence of the Bernese Mountain Dog

Like all mountain dogs, the Bernese Mountain Dog is generally friendly, peaceful, and yet very fearless. At the same time, this large and strong dog is also quite sensitive and needs close family ties. He is absolutely unsuitable as a kennel dog, without a real family connection he suffers immensely. The temperament of the Bernese Mountain Dog suits their size and weight class.

The dogs, which weigh up to 60 kilograms and are up to 70 cm tall (the information relates to the somewhat larger males), are not necessarily a bundle of temperaments, but they are also not as sluggish as one might sometimes think. They are quite sporty and also quite fast animals that like to move, play and still like to “work” today. In addition, they are intelligent and willing to learn, you can teach them anything with a little patience.

As already mentioned, Bernese Mountain Dogs are extremely fond of children. This is shown, among other things, by the fact that the big animals put up with practically everything from the very youngest family members. Pulling at the fur or the ears, putting it in the mouth, nudging and pinching, the well-behaved “Berner” endures all this good-naturedly and unmoved.

The Bernese Mountain Dog is an excellent guard dog and reliably reports any stranger. However, he is not a barker and is not aggressive or even snappy towards strangers. However, there are specimens that strangers like so much that they jump at them out of sheer enthusiasm. Because this is of course particularly problematic with these large dogs, such behavior must be discouraged. 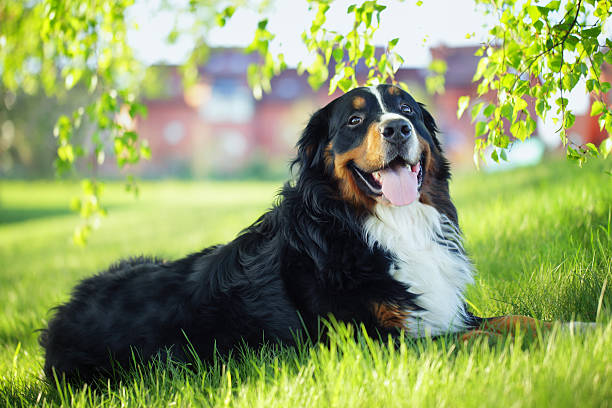 The Bernese Mountain Dog is almost always completely calm towards strange dogs, which is mainly due to its high stimulus threshold. As a rule, he only attentively observes his master or mistress. If they don’t react with fear or panic, the dog won’t either. Some Bernese Mountain Dog males only react a little unpleasantly to foreign males on their own territory. But they almost never get involved in biting.

Anyone who starts socialization early increases their chances of teaching the dog the right behavior from the start. Dog schools optimally prepare dogs for encounters with conspecifics.

What applies to strange dogs can also be applied to other pets such as cats, guinea pigs, rabbits, or birds. The peaceful Bernese Mountain Dog will tolerate them too if he gets used to them slowly. The absence of any form of hunting instinct also helps. Bernese Mountain Dogs have never been used for hunting, they are too cumbersome and too big for that.