The Beagle is a very robust, lively, and funny dog. If you bring such a rascal into your house, you can get ready for action in that case. He constantly comes up with surprises for his people and the cheeky rascal manages not to blame him for a single stupidity.

The Beagle is a very old breed of hunting dog. Their origin probably lies in Normandy, where there were already dogs in the 9th century that were very similar to today’s Beagle. However, these dogs were pure white. They were called Hubertushunde, or Chien de St.Hubert. In the 11th century, these dogs are said to have come to England, where they were called Talbots and later Norman Hounds or Northern Hounds. Then in the 14th century, the British found similar, albeit brown, white, and black patterned hounds in French Gascony, which were larger and heavier than the Northern Hounds and hunted very successfully.

They were called Southern Hounds. Both types were crossed very successfully and are most likely the ancestors of today’s Beagle. The origin of the name, which first appears in 1515, has not been clarified with certainty. It could go back to the French term “beguile”, which roughly translates to “loudmouth”. But a derivation from the Welsh word “beag” is also possible, which means small. At that time, the English also referred to hunting games with a pack of dogs simply as beagling. However, it was not until 1890 that the Beagle breed was officially recognized. 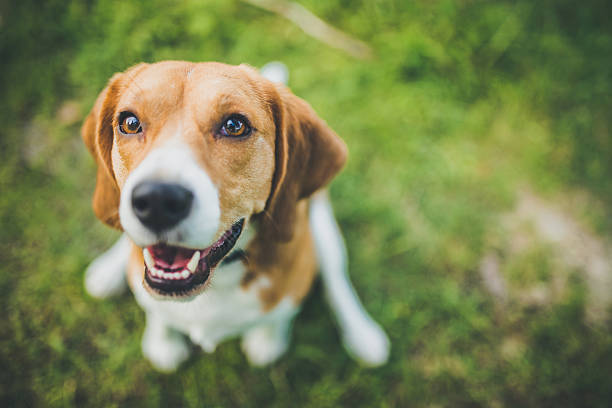 In the past, beagles were used to hunt small game, especially hares, wild rabbits, martens, polecats, and waterfowl, but also to hunt foxes. They always hunted in packs and were led by both horsemen and hunters on foot. They were so-called “catch dogs” who followed a trail and loudly indicated where they were. Their job was not to kill the prey, just to herd it. Today, this type of hunting is very rare and classic fox hunting is forbidden. Beagles are therefore rarely used as hunting dogs. Rather, they are very popular family dogs today.

The Character &The Essence

The nature and character of the Beagle have been shaped by its centuries-long work as a pack hunting dog. He is a pronounced pack dog and that makes him so suitable for a family (as large as possible). This dog is very adaptable, well-tolerated, affectionate, and sociable, in short, a very lovable dog. But he is also a hunting dog, very independent, sometimes a bit stubborn, and very smart. He mercilessly exploits weaknesses in education and always seems to count on the fact that his “pack” can’t blame him anyway. And in most cases, that’s actually true.

The Beagle gets along particularly well with children and is also a perfect playmate. He goes along with all kinds of nonsense, is insensitive to everything that clumsy children’s hands could inadvertently do to them, and is not at all quarrelsome or even aggressive. Beagles are quick and easy learners too, you can teach them a lot of tricks, which they will continue to do enthusiastically.

The Beagle is just as nice and friendly to strangers as to his own family. He is happy about any attention, is very approachable, trusting, and not at all resentful. Unfortunately, this has led to the Beagle being often used as a laboratory dog. As a guard dog, the Beagle is a total failure because he would greet even intruders with great glee and wagging his tail.

Other dogs, if they don’t behave particularly badly, are also very well-liked. If you observe a Beagle on a walk or in the dog park, you will see him playing enthusiastically with all the dogs present, from Chihuahuas to Newfoundlands. This dog seems to send out signals that will instantly put any strange dog to rest and be friendly.

Other pets such as cats, rabbits, and guinea pigs are also tolerated. The curious nose will sniff, lick and eye them where possible, but nothing more. Most beagles will chase strange animals. after all, after their roots, they are enthusiastic hunters. Despite this, it is extremely rare for a Beagle to prey and even kills a deer. Really well-behaved Beagles are also available or at least distracted with treats and there are also dogs of this breed that have no hunting instinct at all. 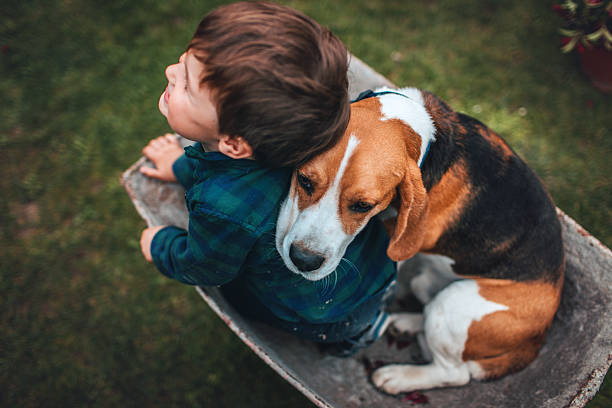 The Beagle is a very agile and sporty dog ​​with a great urge to move. He loves long walks, jogging, and running on his bike, likes to go into the water, and is usually enthusiastic about dog sports such as agility, dog dance, and obedience. In general, this dog rushes around tirelessly for almost the whole day, until he suddenly falls over dead tired almost without transition. A beagle is only wide awake when it comes to eating. He is a particularly gluttonous dog that will devour anything that remotely resembles food. As the owner, you really have to be careful here so that the dog doesn’t get too fat and doesn’t swallow anything indigestible.

The Beagle’s hunting instinct is also very strong in 90 percent of the animals kept as family dogs and even in the former laboratory animals because it is in their genes. They are sight and track hunters. That means they see a game or sense a trail and then the prey drive runs away with them. The rushing adrenaline makes the dogs forget everything around them. They no longer react to their humans, turn their ears completely open and storm away barking loudly until they have their prey or have to give up the hunt out of sheer exhaustion. Many Beagle owners have already experienced and suffered this and waited for hours at the edge of the field or in the forest until the dog came back from its hunt.