Bichon Frise is decorative dogs with curly snow-white fur, closely related to lapdogs. The soft, airy “fur coat” gives the bichons a strong one with a powder puff, which gives the animals a unique charm. The fashion for this breed was introduced in the era of the gloomy Middle Ages by the French kings. As a result, for a long period of time, affectionate and active Bichons remained unchanged, increased the social status of their owners. 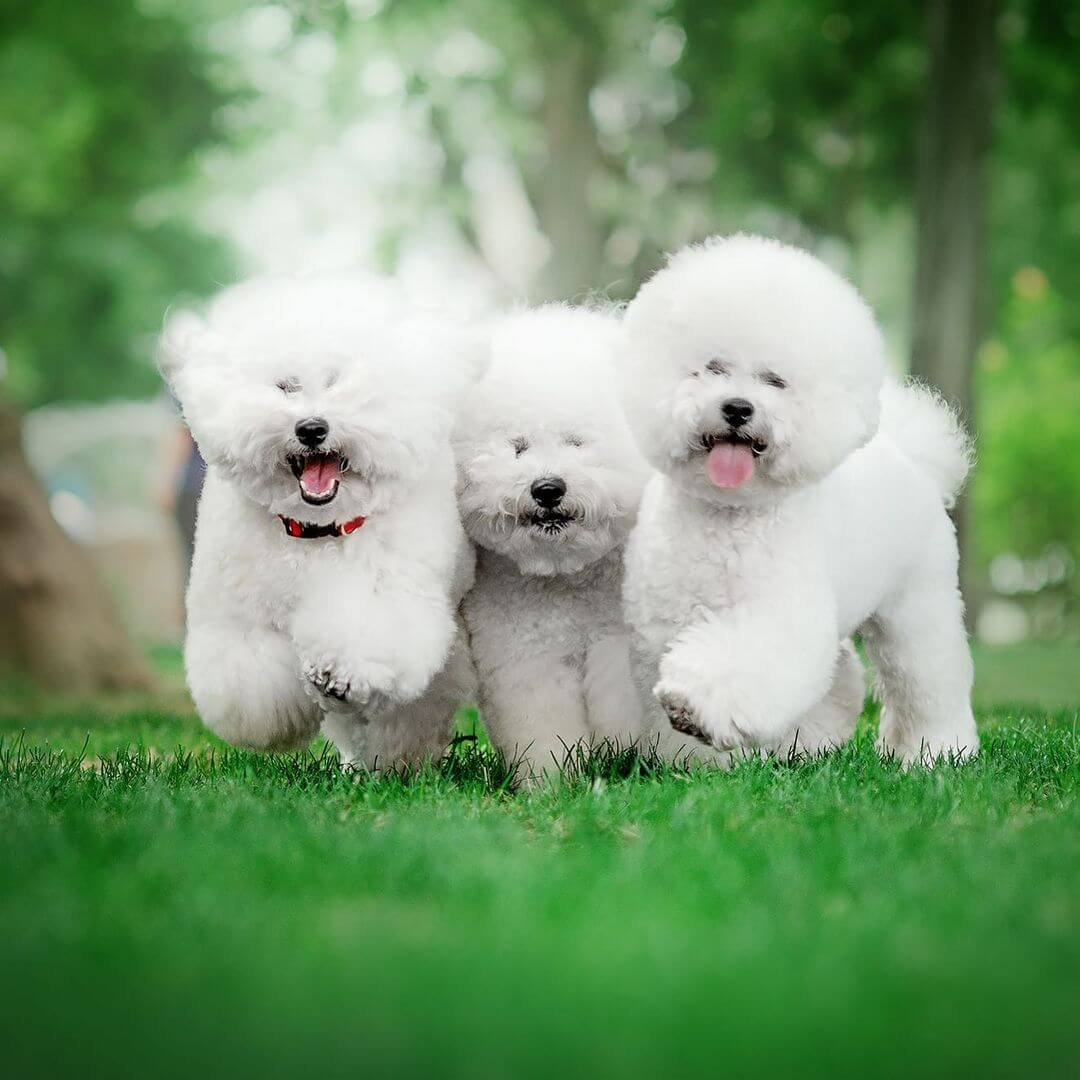 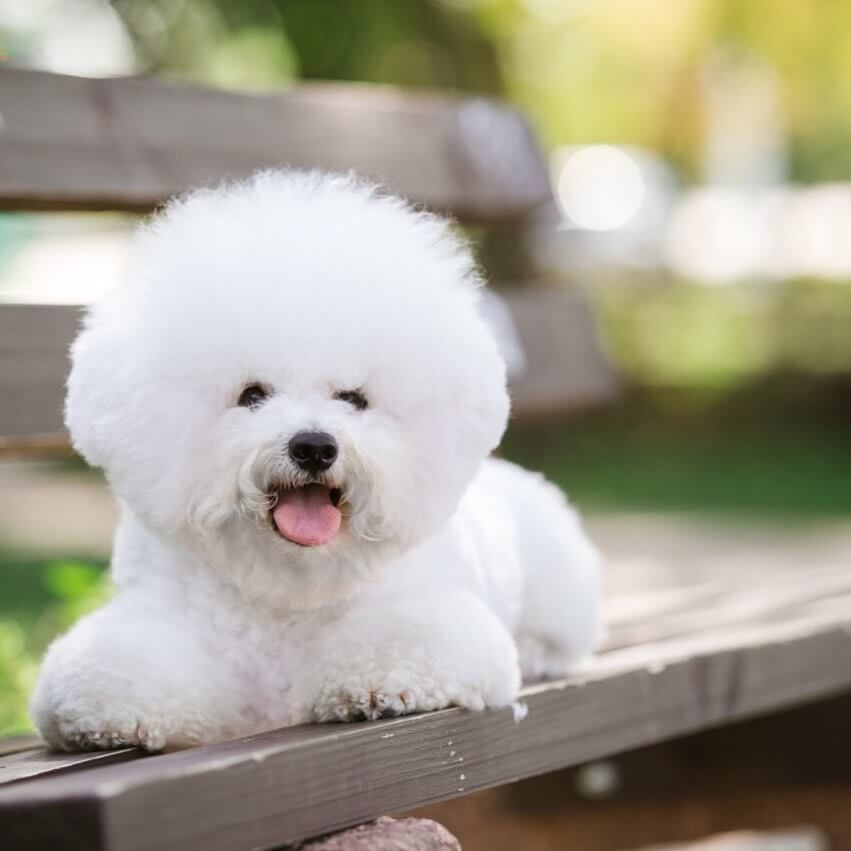 History of the Bichon Frise Breed 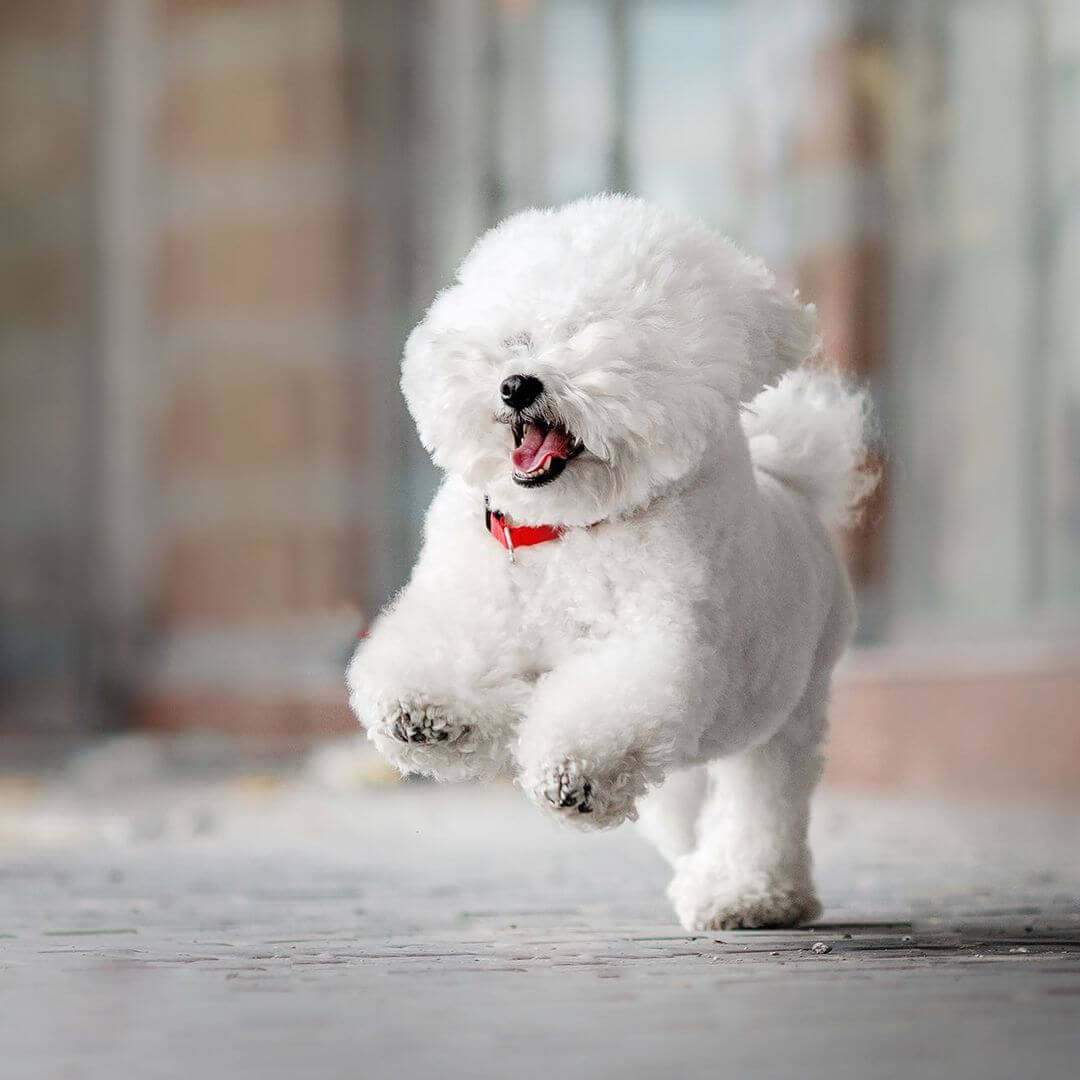 The past of French lapdogs, if not shrouded in mystery and darkness, is thoroughly confused. According to experts, the distant ancestors of the Bichon Frise were small white dogs, which in turn were the descendants of water barbets. Curly pussies inhabited the coast and islands of the Mediterranean Sea and very successfully hunted rats, for which they were often put on ships. The first name of the breed sounded like “Bichon Bar”. “Bar”, short for “barbet”, and “bichon” in French means “velvet pillow”.

Over time, the genus of white dogs with curly hairs has grown thoroughly, as a result of which branches such as Bolognese (Italian lapdog), Maltese (Maltese lapdog), and Tenerife Bichon “spun off” from it. The latter variety was especially popular among the European elite during the Renaissance and, in fact, gave rise to the modern breed of French lapdogs.

By the 13th century, the Bichons had acquired the status of an element of luxury. A French lapdog puppy could be presented as an exclusive gift, or used as live currency when making a deal. A special popularization of the breed was promoted by Francis I. The knight-king kept in his court an innumerable number of lapdogs, to which a new nickname was stuck in those days: “Infant dogs”.

After the French Revolution, interest in the Bichons gradually faded away. From the palace chambers, the dogs quickly moved to the Parisian streets, from where they migrated to traveling circus troupes. The official name “Bichon Frise” was given to the breed by the International Cynological Association in 1933. A year later, general standards for the appearance of French lapdogs were formulated. As for the distribution of the breed, the favorites of Francis I reached the USA only in the 50s of the last century, and in England, they began to breed Bichons only in the mid-70s. 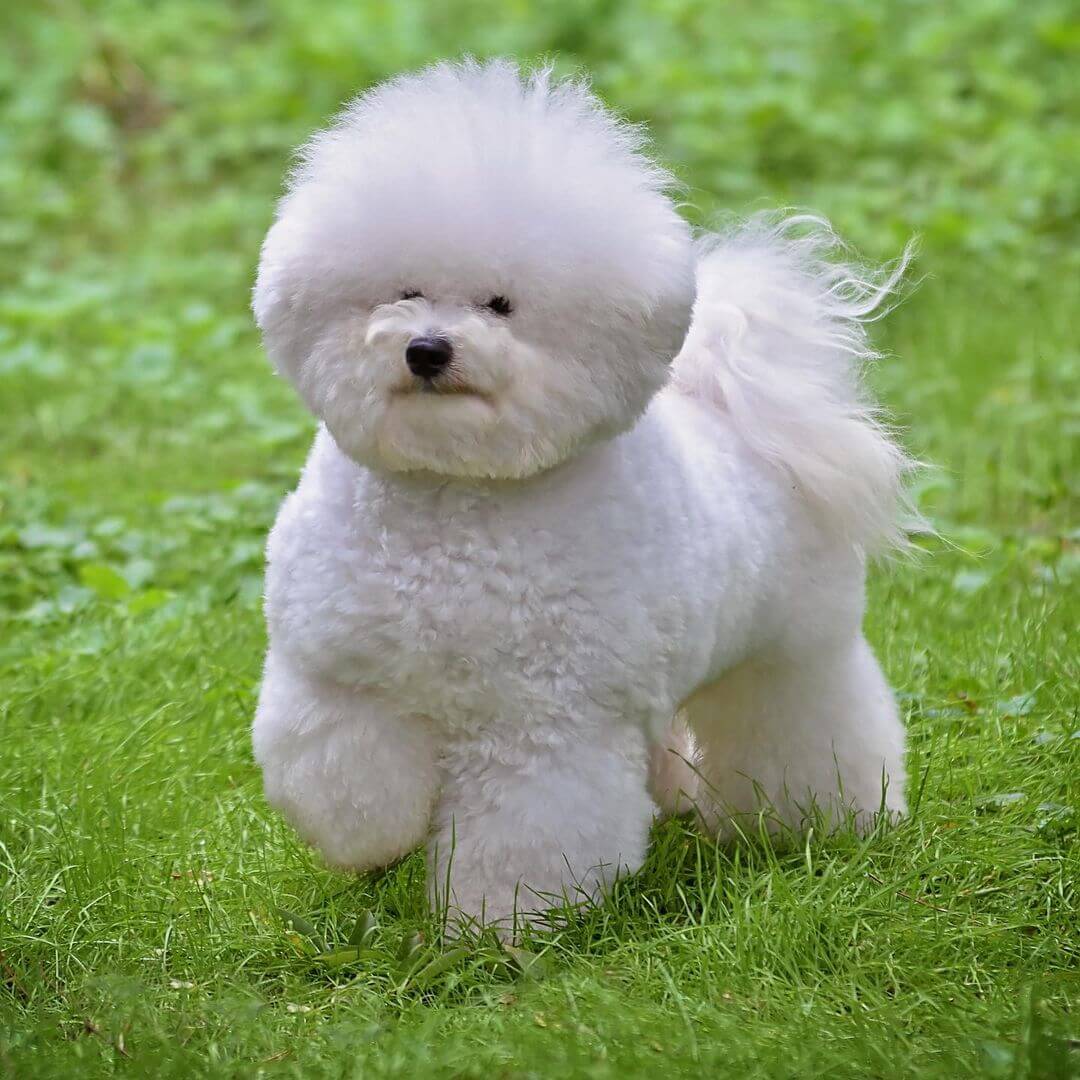 It is difficult to find a more touching creature than French lapdogs. Drowning in their airy “coats”, they resemble weightless white clouds, while the miniature size of animals makes them look like a soft clockwork toy. Like the vast majority of representatives of the indoor decorative breed, the Bichon Frise has an inexhaustible supply of charm. The size of an adult usually does not exceed 30 cm, and its weight is 3-5 kg. 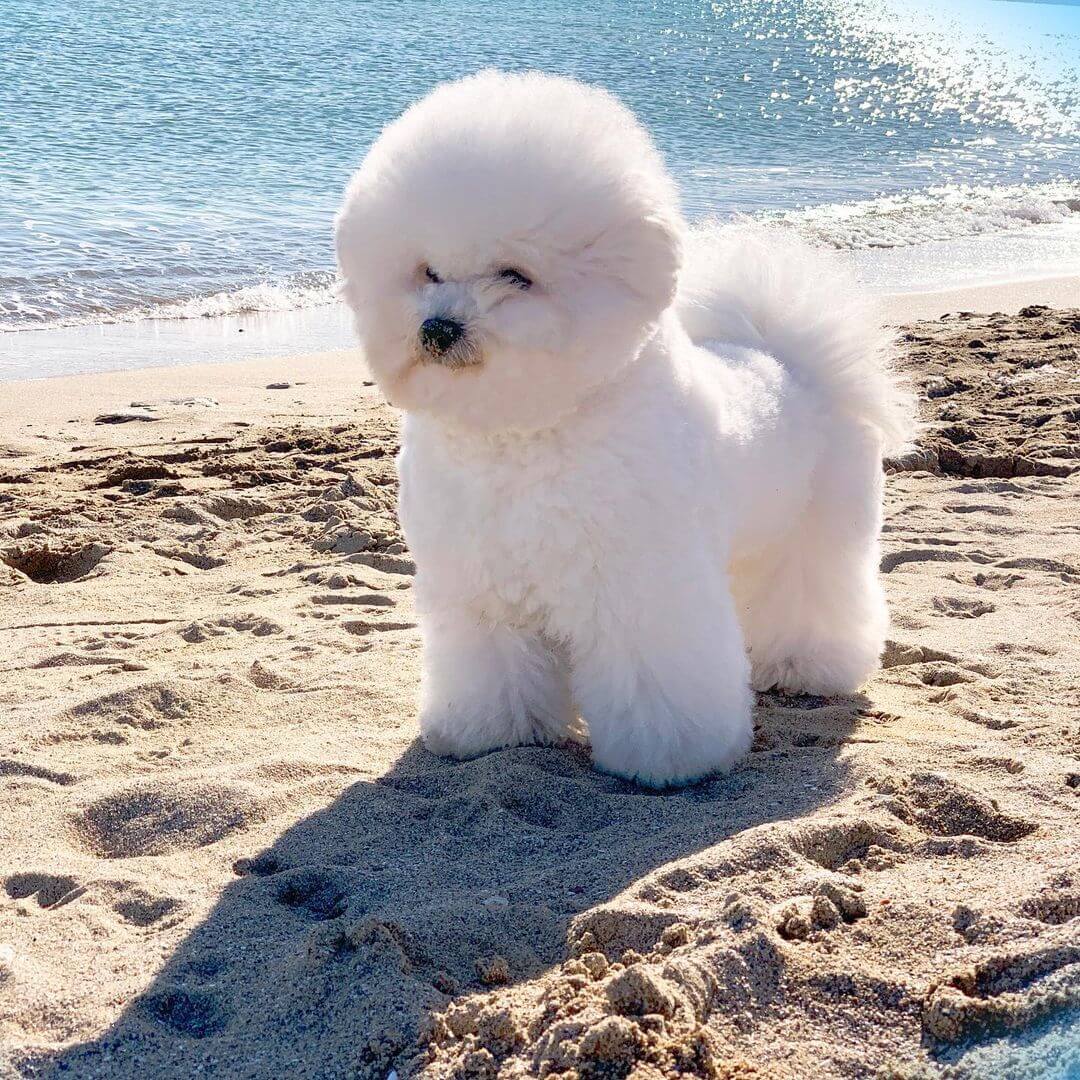 Curly, airy, not prone to knocking into the so-called “cords”, from 7 to 10 cm long. The undercoat is thick, dense, and springy. An animal caught in the rain usually does not get wet, because due to the density of the undercoat, moisture does not penetrate deep into the “fur coat”. The cleanly washed wool of the Bichon Frise is more voluminous, so after taking a bath and drying the animal turns into a tightly knit “dandelion”. To give the silhouette some completeness, bichons are usually cut.

Adults are snow-white in color, but in puppies, the coat color may have a beige or yellowish undertone, which disappears as they mature. According to standards, areas of yellowish coat should cover no more than 10% of the puppy’s body surface. 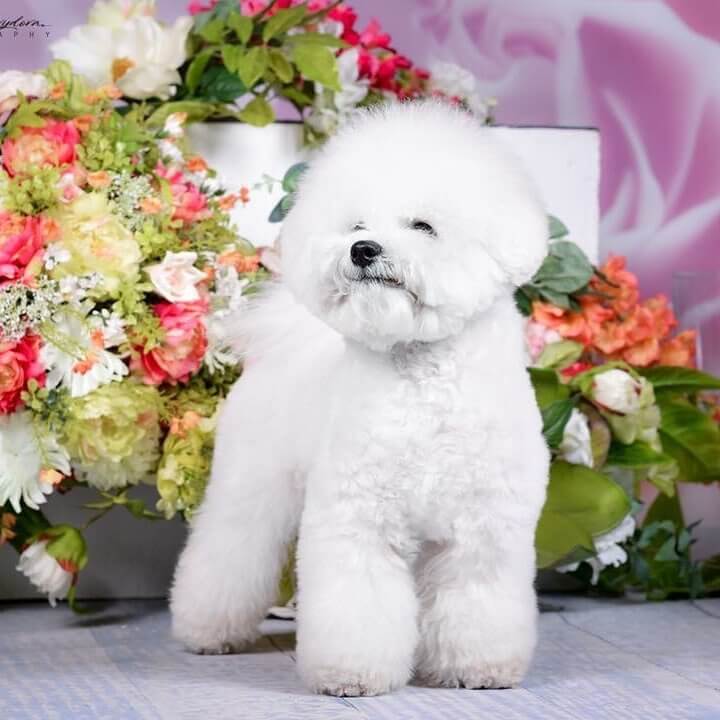 French lapdogs are real little “energizers” who don’t sit still for a minute. They are extremely friendly, active, and amusing creatures that easily take root both in spacious houses and in small apartments. Bichons are very sociable and will be happy to live with families, which will give them the opportunity to involve as many people as possible in their games.

Because of their benevolent nature and charm, French lapdogs are often attracted to pet therapy. Sweet snow-white lumps are frequent guests in children’s hospitals and nursing homes. In addition, these decorative dogs make reliable watchmen. Bichons have a clear voice, which they use with pleasure every time an unfamiliar creature appears on the threshold of the apartment. 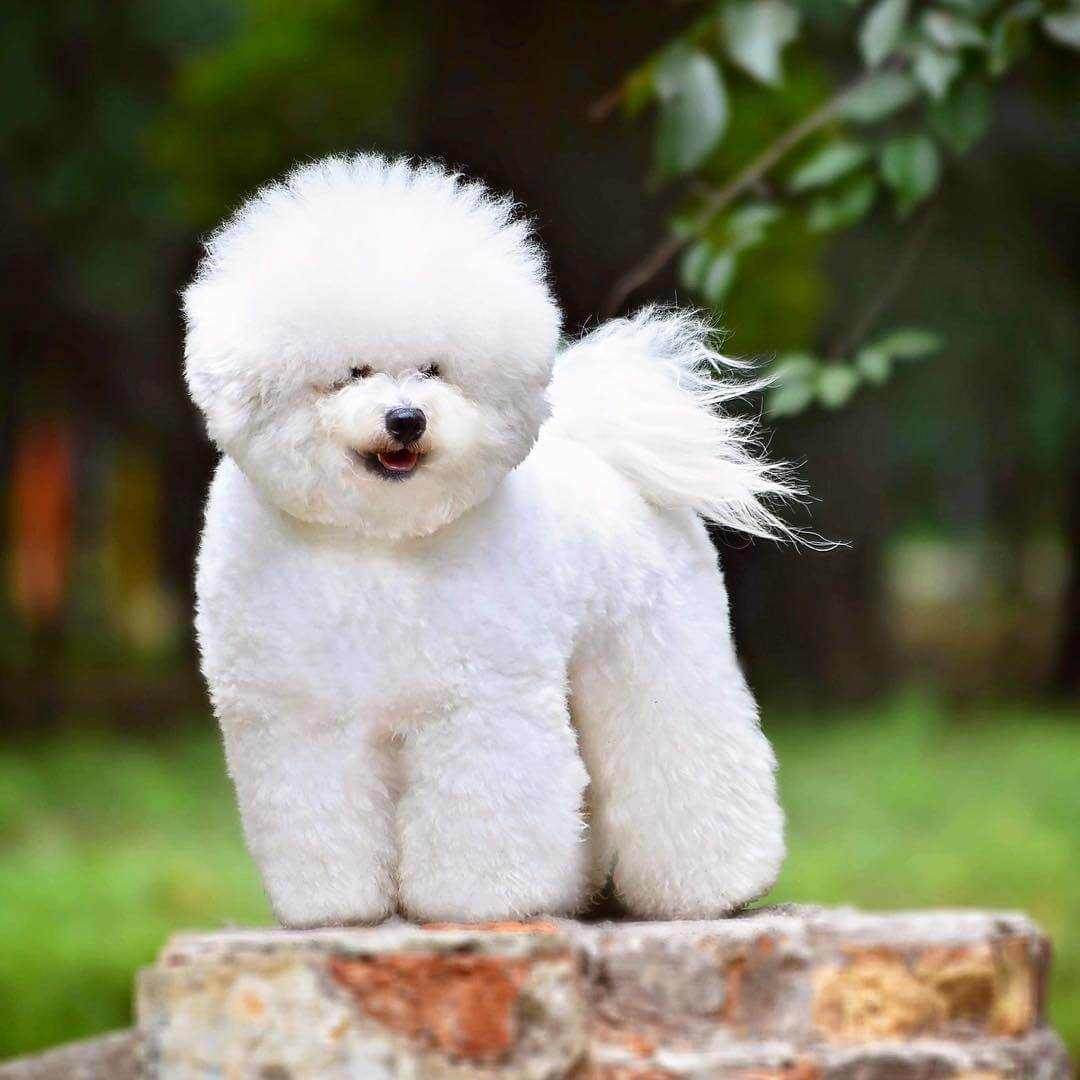 Training French lapdogs is not so difficult. Miniature dogs easily learn not only elementary but also quite complex commands, which is why Bichons can often be found in the circus arena. It is better to start training animals from an early age, but this should be done taking into account the characteristics of the breed. The simplest commands like “Fu!”, “Place!”, “Come to me!” Bichon Frise puppies learn quickly, but it will take a little longer to develop more complex skills.

When playing with people, puppies, and adult dogs, often take the liberty of biting. To minimize the risk of accidental injury, the animal should be weaned from this habit as early as possible.

French lapdogs have a somewhat windy character and do not like to concentrate on one activity for a long time. They quickly get bored with long and monotonous lessons, which cannot be said about pranks and mischievous tricks.

Bichons categorically do not accept rough treatment, formidable shouts, therefore, using force during training and forcing an animal to execute commands “from under the stick” is a deliberately failed idea. Ideally, raising a dog should be based on its interest in the training process.

Trying to put yourself on the same level as the animal is also not worth it. Bichon must understand that he is not in charge of the house, but the owner. Otherwise, there is a risk of getting a spoiled and uncontrollable pet.

When training Bichon Frise, you should be patient and have all sorts of tasty treats that will become an additional incentive for the animal to study. Behave with the dog affectionately but firmly, exercising in a casual, playful way with the indispensable reward of the pet at the end of the process. If the animal misbehaves during training, you can “read the notation” to it in a strict tone (not to be confused with screaming).

Hosts wishing to introduce their pet to volunteering are advised to find a canister therapy training program for their four-legged friend. Taking such courses will provide the dog and its owner with the opportunity to participate in pet therapy activities. 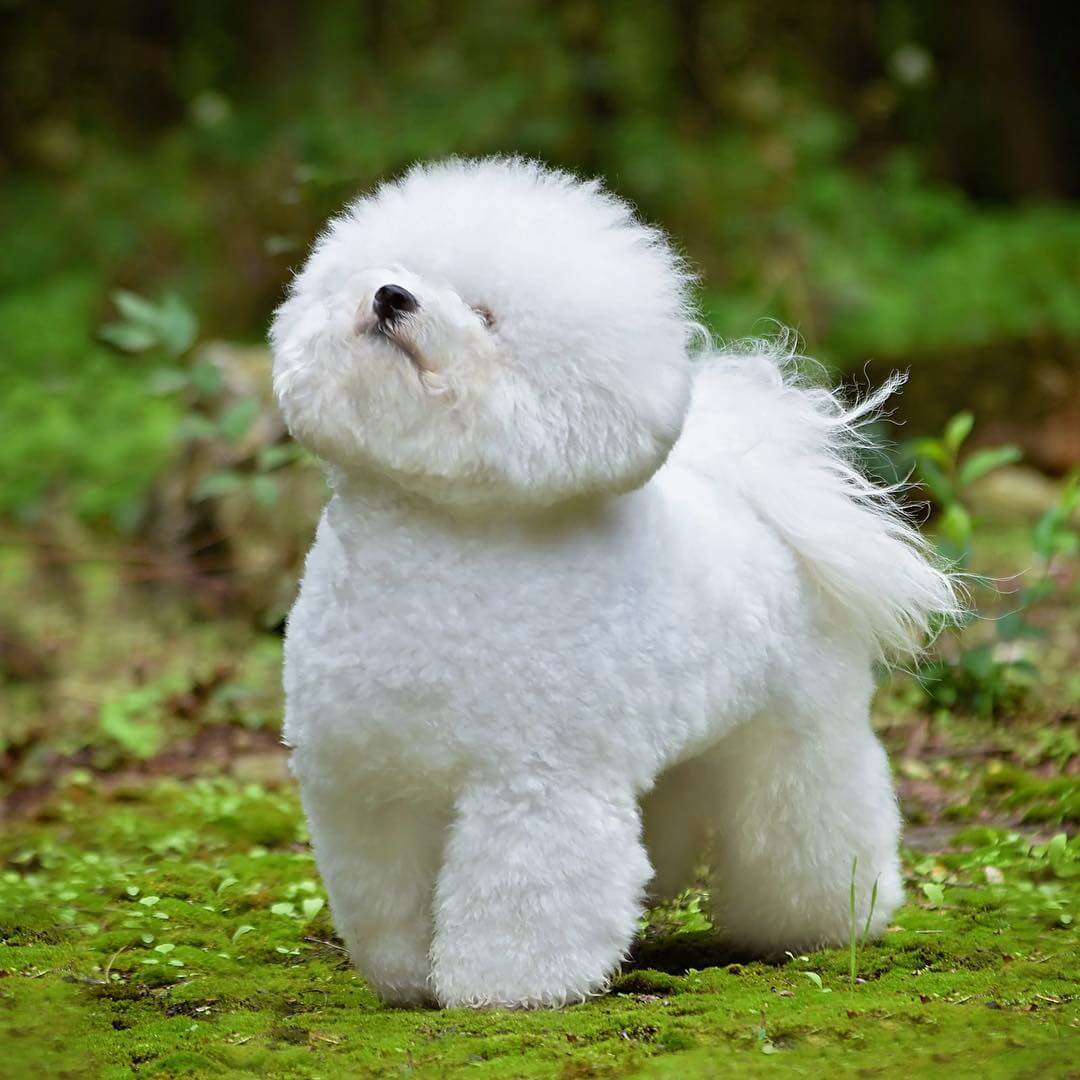 The Bichon Frise is not a breed that you can afford to be a little lazy with. Despite the fact that French lapdogs practically do not shed, their lush coat needs careful care. It is necessary to comb the animal every day (preferably after walking to remove debris and grains of sand entangled in the wool), and also use a slicker to give the “fur coat” airiness.

If a pet comes from the street, they usually wash their paws, muzzle, and genitals. French lapdogs are supposed to be bathed once a month. When washing, be sure to use a mild shampoo and conditioner to make the coat easier to comb. It is advisable to visit the groomer once every 2-3 months. However, if you are not raising a show-class animal, you can save a little on grooming and cut the animal yourself.

The eyes of the Bichon Frise should be checked every day and, if necessary, cleaned with a cotton swab dipped in cool boiled water. The same rule applies to ear cleanliness. Bichon claws are trimmed twice a month with a nail clipper or tweezers. The unevenness of the nail plate formed after the procedure is filed. The teeth and mouth should be cleaned with a special toothpaste at least once a week. 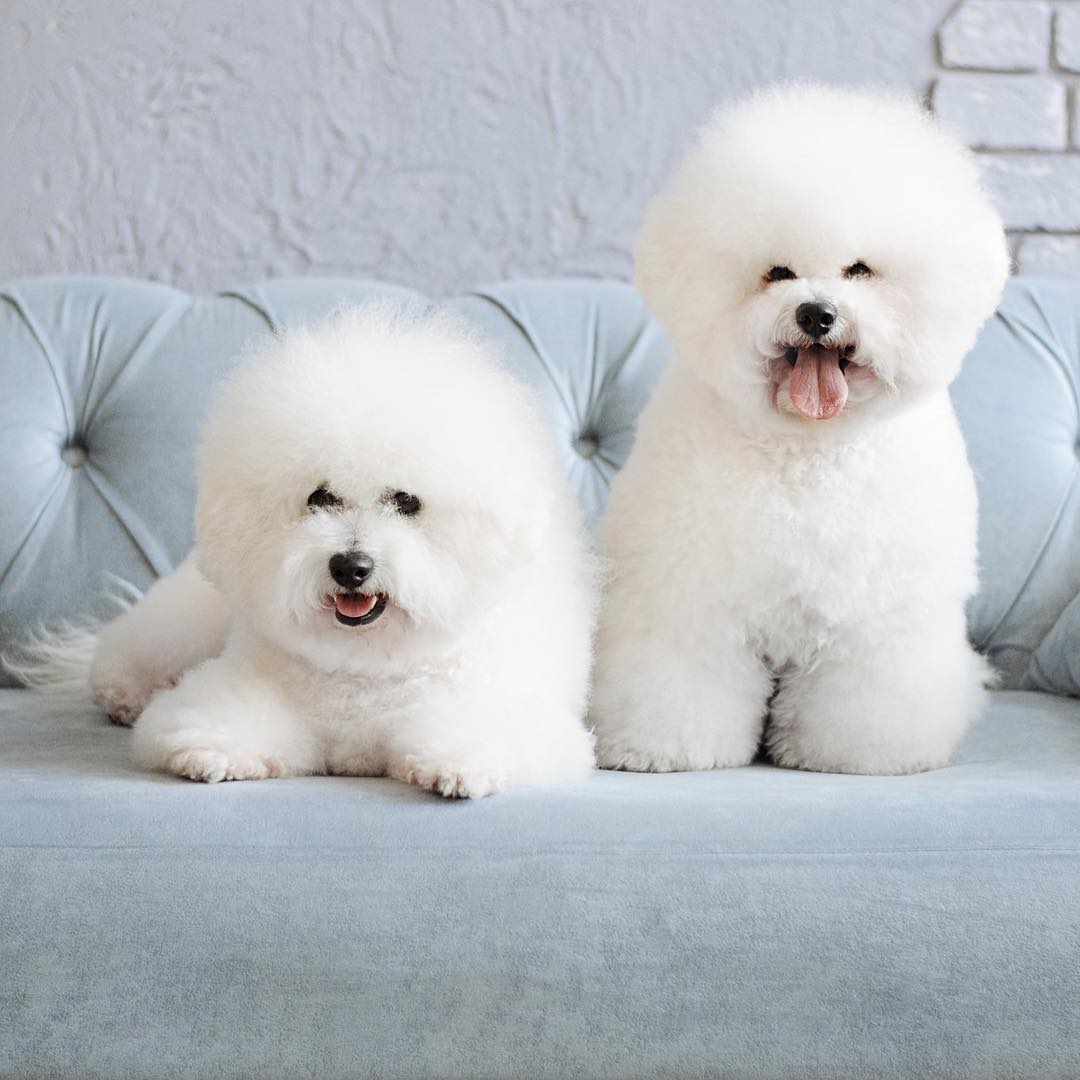 Regarding the French lapdog with natural products, preferring a combined feeding option or limiting yourself to dry food is a question that each owner decides in his own way. Of the obligatory “dishes” that should be present in the diet of a “dandelion dog”, it is worth mentioning raw meat (to soften the product, it can be slightly doused with boiling water), boiled and raw vegetables, sea fish, from which the bones, boiled buckwheat, and oat cereals. Since adult Bichon Frise are fed twice a day, it is better to give them meat with an evening meal and in a carefully chopped form (it is highly desirable that it was not pork).

The inclusion of milk in the Bichon menu is permissible only for puppies. For adults, a small amount of any fermented milk drink once a week is enough. It is highly not recommended to treat your pet to fatty, spicy, and salty delicacies. Sweets, sausage, baked goods, pasta, legumes, and potatoes are also strictly prohibited, not to mention meat and chicken bones.

Individuals who are on natural feeding are shown to receive vitamin complexes. Be sure to make sure that these are not preparations based on carrot and algal extracts, which are usually brightly pigmented and can noticeably change the color of the pet’s coat.

French lapdog puppies are fed 5-6 times a day. As the dog grows up, the frequency of feeding decreases, and by the age of 9 months, the animal completely switches to the “adult” two meals a day. 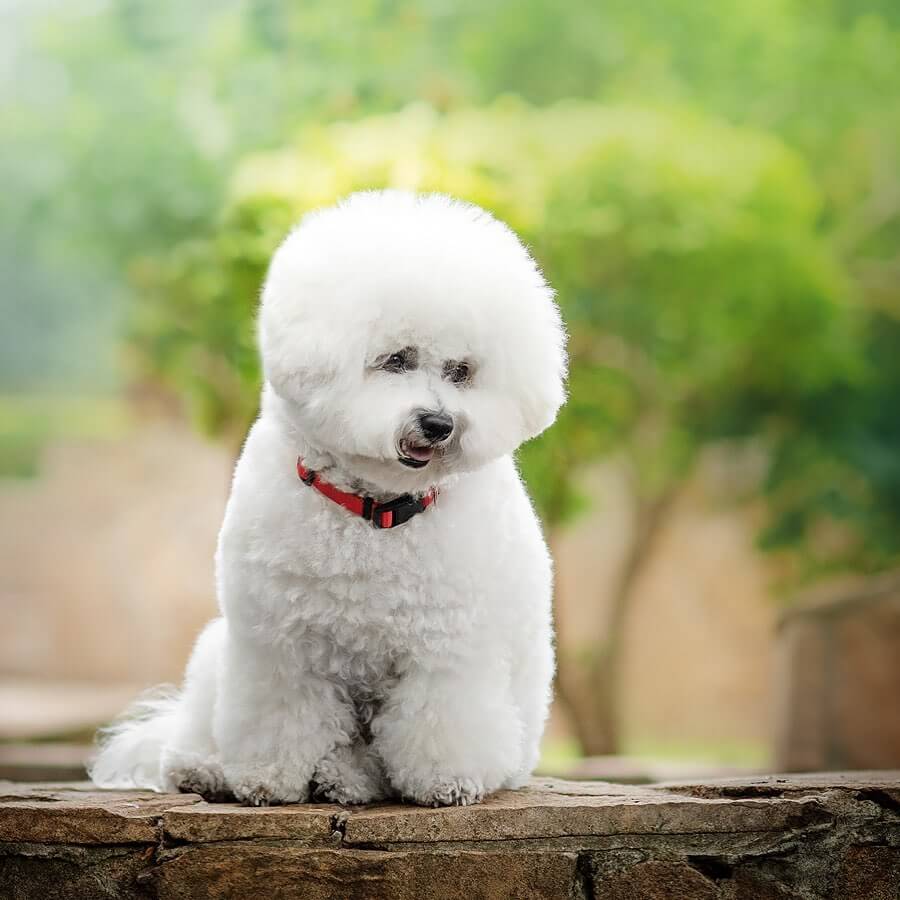 The average life expectancy of French lapdogs is 12-15 years. With proper care, some individuals are able to live up to 19 years, while most of the animals die not from incurable ailments, but from old age. Genetic diseases are almost never found among Bichon Frize. The most commonly diagnosed diseases of the breed include:

In some individuals, there is a deformation of the lacrimal ducts, the signs of which are excessive tearfulness of the animal, or the complete absence of lacrimal discharge (the second type of pathology will help to correct the operation). Also, Bichon Frise has an increased sensitivity to vaccinations, therefore, if after vaccination changes in the behavior of the animal and allergic skin rashes are noticed, it is better to immediately contact a veterinarian. 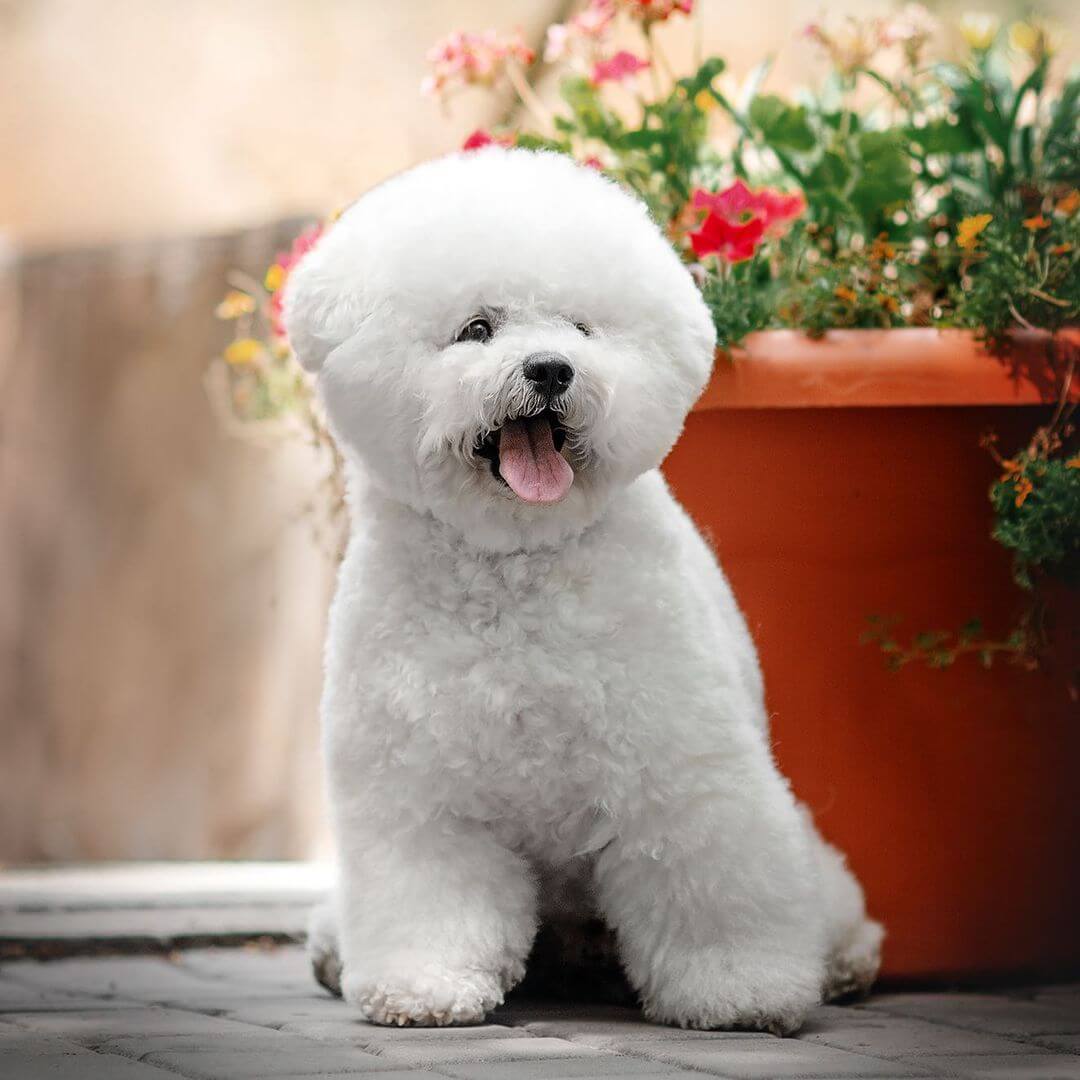 The main difficulty in choosing a Bichon Frise puppy is the lack of bright signs of the breed in young individuals. Often, under the guise of a French lapdog, you can buy an ordinary white fluffy that has nothing to do with this branch. If your goal is to acquire a reference show-class animal, not to mention representatives of the breed variety, it is worth involving an experienced specialist in this matter.

When meeting a future pet, immediately sweep aside overly nervous, aggressive, and cowardly individuals. It is unlikely that their character will improve with age. For the rest, follow the same rules as to when choosing any purebred animal. Get to know the living conditions of dogs in the kennel, do not hesitate to ask the breeder to introduce you to the puppy’s parents, carefully study the veterinary passport of the future pet. But you should not pay attention to the weight and disproportionate head of the Bichon: in the process of growth, the animal very quickly gains muscle mass, and the shape of the skull gradually evens out.

The optimal age for Bichon Frise puppies for sale is 3-3.5 months.