In the UK, the Border Terrier is a popular dog breed for families and hunters. You don’t see the Border Terrier breed in other countries, but their popularity is steadily increasing. You can read below what makes the adventurous four-legged friend special.

History of the Border Terrier

The Border Terrier was once native to the border region between England and Scotland. That’s probably where his name comes from because the English term ″border″ means border. However, where his original ancestors came from is unclear. It is thought to be related to the Dandie Dinmont Terrier and Bedlington Terrier.

Images of a dog that looks like him date from the 18th century. However, it was not specifically bred in Great Britain until the 20th century. He was bred as a hunting dog, also for the pack, primarily for fox hunting. He had to be quite fast to be able to run alongside the hunter riding on horseback. Furthermore, it couldn’t be too big to fit into the Burrow. Even today, his outstanding services are still used for hunting.

The Border Terrier was recognized as an English dog breed by the Kennel Club in 1920 and by the FCI in 1963. He is listed under the FCI standard number 10, FCI group 3 ″Terriers″, section 1 ″Long-legged terriers″. 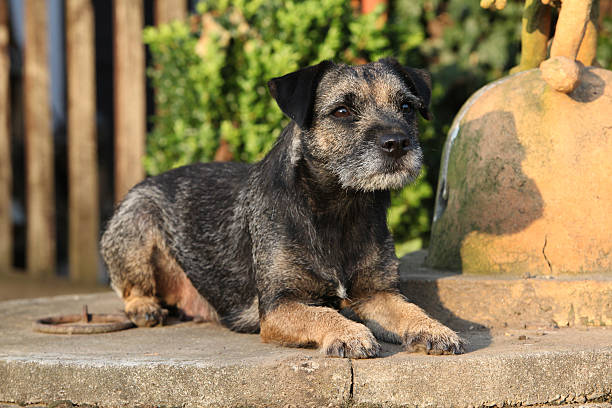 The Appearance of the Border Terrier

In terms of appearance, the Border Terrier is often mistaken for a crossbreed by the ignorant. Its head, which resembles that of an otter, is striking. The Border Terrier’s rough, bristly, weatherproof coat ranges in color from blue/tan, red, wheaten, to full tan. Black often adorns the area around its muzzle, the muzzle itself, its alert, perky almond eyes, and the tops of its small, droopy ears. With a size of 28 to 40 centimeters, it is one of the small to medium-sized dog breeds. The four-legged friend has long, slender legs. He always carries his high set, hairy tail straight.

The Border Terrier character can be described as cheerful, lively, and intelligent, among other things. Since he was bred as a hunting dog for the pack, he is very socially compatible with his conspecifics. The curious four-legged friend is characterized by a strong hunting instinct and a very good sniffing nose.

That’s why he likes to set off on his own if something catches his eye. Unless the recall has been well trained from an early age or the garden is not escape-proof, nothing will stop him so easily. Neither hedges nor water. Because the former otter hunter loves the water and is well protected by his robust fur. The working dog is very persistent and can work for hours on the hunt, in all weather conditions.

Since the Border Terrier is very playful but not aggressive, it is also an ideal dog for active families with children. The children should be a bit older, as he can be quite boisterous when playing. He gets along well with other dogs in the household, but not so much with cats. Because the hound will follow his hunting instinct. The fearless terrier reliably protects his home by barking to report anything unusual. His kindness extends to welcoming visitors to his human pack.

Getting a Border Terrier

Is the Border Terrier right for me?

The happy, agile four-legged friend suits active people, whether they are single or a family with children. Since he can be trained very well with consistency, dog beginners who spend a lot of time with him can also give him a home. Seniors are less suited to the energetic terrier.

If you want to buy a Border Terrier, you will pay around 800 to 1000 euros from reputable breeders. This price is quite justified since the breeder has expensive genetic tests and health examinations carried out for the health of his animals, among other things. Puppies that are offered too cheaply are strongly discouraged. 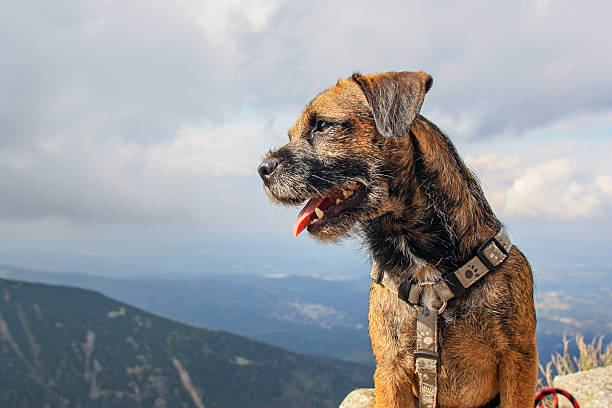 You should only buy a puppy from a reputable Border Terrier breeder who is registered in a breed club. Good breeders only allow healthy parents to breed in order to rule out hereditary diseases in their puppies. They can provide evidence of corresponding genetic tests on both parents.

A reputable breeder will not sell the puppies before they are 8 weeks old. And then only with vaccination cards and breeding papers. His puppies were microchipped, dewormed several times and health checked. A good breeder allows you to get to know the puppies before you buy them. This way you can get an idea of ​​whether they come from a good home. Don’t be surprised if the breeder asks you many questions. He wants to make sure his puppy has a good new home.

The Border Terrier is very intelligent and easy to train. The little terrier can be taught from an early age with a lot of love, patience, and, above all, consistency, who is in charge. If accepted as the leader of the pack, the independent hound will learn with ease, and that’s quite a lot for a puppy to begin with. For example, he has to learn rules for dealing with his new human pack; possibly get to know other pets; one or the other command such as sit and down; ride in the car; the recall from freewheeling and ″personal care″. Going to a dog school will definitely do him good. There he can play and wrestle with other four-legged friends and learn to socialize well at the same time.