In terms of character and temperament, the borzoi is reserved and rather calm. Despite this, he can be stubborn at times and his nature as a fast and impulsive hunter requires special training with loving consequences but without any harshness.

Nature of the Borzoi

When threatened, he is a brave and dangerous adversary, characterized by tremendous strength. His innate temperament as a sighthound requires sufficient exercise, which can be achieved, for example, by dog ​​races, which are particularly difficult because they are enduring runners, or by participating in rabbit hunts.

Although he has a natural protective instinct, he barks relatively little. They can also adapt well to housing conditions that don’t quite match their enormous size and are the exact opposite of what is commonly referred to as the “elephant in a china shop”.

Nevertheless, they are not affordable for everyone, since they have a healthy appetite and probably need an appropriate space to live. Although they can be very stubborn at times, they train well compared to other sighthounds.

The calm that they radiate and their extremely impressive appearance and their great beauty and elegance, which of course require special, regular care, make them attractive housemates for those who can and want to afford them. Beautiful to look at, the Borzoi is a loveable, loyal, and affectionate companion dog. He radiates pride, calm, and serenity and looks very dignified in his appearance. 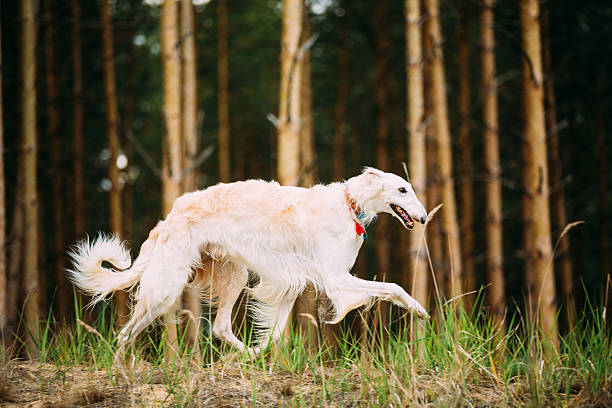 He is reserved towards strangers, towards other dogs he shows a reserved distrust. His hunting instinct is one of his character traits; you should never forget that when you take him for walks in the woods and fields.

If the borzoi discovers a prey animal, he will immediately seize the opportunity to hunt. The free-roaming game immediately excites him, and because of his excellent eyesight, he can see this even from a great distance.

The borzoi, whose name derives from the Russian word for nimble, “borzoi”, belongs to the FCI group 10 of sighthounds. The borzoi has its origins in “ancient Russia” (today CIS). There are reports of these dogs as early as 1100 AD in old French documents, which clearly show that this breed was already being kept at the court of the Grand Duke of Kyiv.

As with many other breeds, the exact origin of the borzoi, which is by far the most well-known dog from Russia, is the subject of extensive debate among enthusiasts and experts alike. It is partly assumed that the Tartars brought the ancestors of this breed, short-haired sighthounds from Arabia, to Russia and that borzois were bred to hunt wolves, rabbits, and foxes from the beginning of the tsarist rule in the 14th and 15th centuries.

Elsewhere, however, it is assumed that its beginning was only at the beginning of the 17th century when a Russian prince for hunting wolves first introduced sight-hunting greyhounds from the Middle East. However, it turned out relatively quickly that they did not have much to counter the cold Russian winter. In order to adapt them to these extreme climatic conditions, they were probably crossed with a long-legged Russian collie breed, which should give them the long coat they needed.

But crossings with Tatar hounds are not excluded either. The Russian nobility of that time had a pronounced passion for large hunts with hundreds of borzois and correspondingly large packs of Bracken according to a fixed rate. In addition to the magnificent clothing of the noble hunters and their servants, this included horses of selected quality. 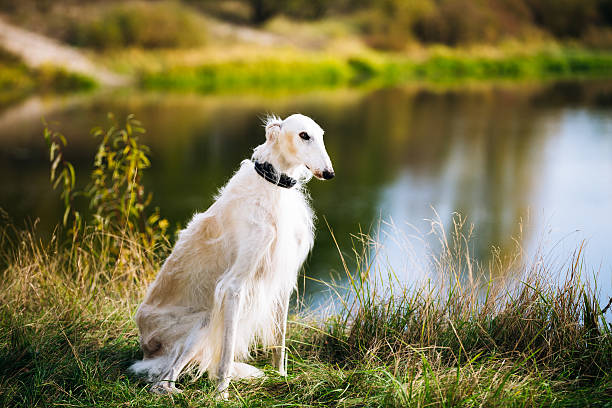 The borzoi was selected in pairs from the huge farms. Only when they were nearly identical in looks, strength, and speed were they considered good enough for their purposes by the decadent nobility. A pair of borzoi was then chased by a sighted wolf. After they had attacked the wolf from both sides at the same time and thrown it to the ground, the hunter killed the wolf with his sword.

These events, which were particularly opulent in the 18th century, ended with a big party at court. Many royal families in Europe were presented with borzois by the respective tsar, as their special appearance made them a particularly exotic and therefore valuable diplomatic gift. The borzois, which were presented to the later English Queen Alexandra in 1842, were crossed with local collies on the royal estate of Sandringham near Norfolk, and an independent breed of white, rough-haired collies was created.