Wasn’t the cat just in the kitchen? How did she suddenly get into the living room? The Ceylon is so fast that beaming suddenly seems possible. A moment ago she was sitting at her bowl, now she is enthroned on the scratching post and watches her humans. Where this cat is, there is life. Ceylon is a good choice for those who appreciate active togetherness, but also want to enjoy loving moments.

If you are sitting comfortably on the sofa and suddenly a fresh breeze blows past your neck, a Ceylon has probably just blown past behind you. The little cat is big when it comes to exercise. She loves to run and climb and nimbly hops from one game to the next. It never gets boring with her.

When the Ceylon gets tired, it shows its gentle side: Then it goes to its humans and cuddles with them. She is considered very affectionate and likes to be in company. Make sure you take time for them because these breaks are usually short. The Ceylon will soon be ready for the next mischief, for the next adventure. They are very interested in their environment, even towards strangers this breed appears friendly and curious. She is not lacking in courage and self-confidence. Ceylon’s easygoing nature makes her a great roommate – just make sure to keep her busy.

There is a lot of power in the small, delicate body of Ceylon. As slender and delicate as she looks, her body is still muscular. This cat jumps and runs like there’s no tomorrow. Their hind legs are slightly longer than their front legs and end in adorable little paws. The tail is broad at the base, quite short, and narrows towards the tip. Males are slightly more heavily built than females.

The Ceylon’s medium-sized head is rounded, with strong cheeks and a strong whisker pad. Large ears are set high on the head, showing that this cat misses little.

Who can resist a look into Ceylon’s large, almond-shaped eyes? They glow in a color spectrum from green to yellow. You’ll almost automatically reach out to pet this beauty: her fine, silky coat is generally sandy or golden in color with a cream, black, blue, red, or tortoiseshell tabby pattern. Because it is so short, the Ceylon finds it easy to groom themselves. Nevertheless, she will certainly not mind if you always take the time to pamper her with a soft brush.

An attitude of the Ceylon

This cat wants to move. Therefore, it is important that you provide enough space and entertainment options. Since Ceylon is very adaptable, it can be kept indoors. But she will be even happier if she finds a cat-safe balcony or garden. She also feels comfortable as a freelancer. She is not a cat that disappears for days – she appreciates the closeness to her people too much for that. However, she will bring you “gifts” from her walks: she is a great hunter.

Being so sociable, Ceylon loves to socialize with other cats or even dogs, especially if they have grown up with them. She also gets along well with children as long as they treat her with respect and in an appropriate manner.

Make sure your Ceylon always has access to scratching posts or even a climbing wall: it is in their nature to climb and jump. She will also be happy about a selection of cat toys. If you then schedule joint, daily play units with her, you have an extremely cheerful and well-balanced cat at your side.

The Ceylon is a breed of cat that evolved without human intervention in its native country of Sri Lanka. Italian veterinarian Paolo Pellegatta discovered and was fascinated by the small cats, which resemble the wild cat of Sri Lanka. They are highly respected in their homeland because they have an “M” on their forehead, which is called “cobra” and is considered sacred in Sri Lanka. This ensures that the cats are also allowed to stay in temples. In January 1964, Dr. Pellegatta took six Ceylon cats home with him. In the years that followed, he repeatedly traveled to Sri Lanka to bring more animals to Europe and to breed them. In this way, the gene pool expanded in a healthy and natural way. Even today, care is taken to preserve the original type of Ceylon.

In 1984 the first Ceylon cat was exhibited at an international cat show. From that moment on, the little cat conquered people’s hearts. In 1989, the Federazione Italiana Associazioni Feline (FIAF) first recognized Ceylon as a separate breed, followed by the World Cat Federation (WCF) in the early 1990s. 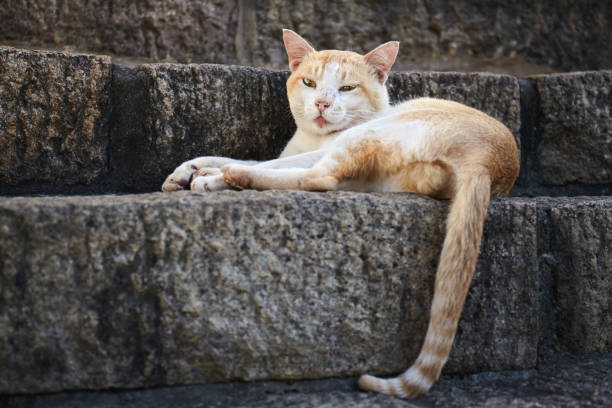 The Ceylon is one of the robust cat breeds with good basic health. Due to her originality, she is not known to have any hereditary diseases.

Ceylon is not yet widely represented in Germany, so it can be more difficult to find a responsible breeder. A look at neighboring Italy can help with the search.