Chow Chows are one of the oldest dog breeds and were kept in their current form in China as early as the 11th century BC. It is believed that all European Spitz breeds originally descended from the Chinese “lion dog” (shīziquǎn). Here you can find out why the chow is not for beginners and what special features such a puppy brings with it.

Contents hide
1 External Characteristics – This is What Makes the Chow Chow so Distinctive
1.1 Breed description according to FCI
1.2 The chow’s lion-like coat of hair
1.2.1 Longhair
1.2.2 Shorthair
1.3 Desired colors in breeding – typically Asian
1.4 Differences between similar breeds
2 The Story of the Chow-Chow
2.1 Genetic peculiarities

External Characteristics – This is What Makes the Chow Chow so Distinctive

The Chow-Chow is a medium-sized guard dog that appears even more voluminous due to its bulging folds around the head and neck and the fluffy hair that sticks out. Its most striking feature is the blue-black tongue, which occurs in all color varieties. Bitches reach a height at the withers of 46 to 51 cm, males are slightly larger at 48 to 56 cm. A specific weight is not specified and depends heavily on the individual body shape of the animals. They can weigh between 16 kg and 41 kg without being over or underweight. You should determine your dog’s ideal weight with the support of a veterinarian.

Breed description according to FCI 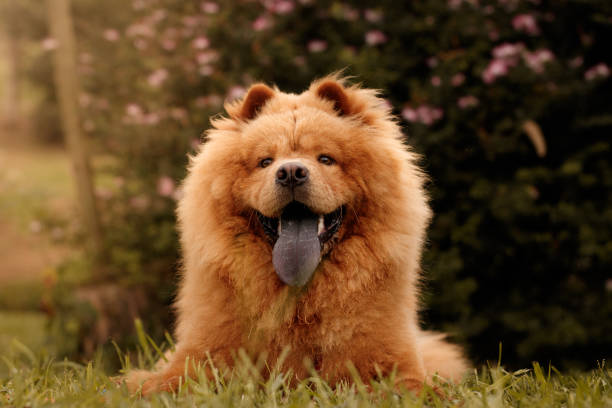 The chow’s lion-like coat of hair

Two coat types are bred, which differ greatly in appearance. One thing both types have in common is the fluffiness of their fur. Chow Chows have a certain resemblance to teddy bears due to their dense and protruding fur. In both variants, the hair grows short at the muzzle.

Very dense and straight hair, not excessively long. The topcoat is rather coarsely structured, and the undercoat is very soft. So-called trousers (longer topcoat than the front) are formed on the backs of the legs. The mane on the collar is very easy to recognize on long-haired chows.

The mane of the short hair is not so pronounced. The fur is only a few centimeters long and is plush. Overall, it’s a bit softer than the Long-Haired Chow.

All Chow Chows are solid in color with lightened hair on the underside of the tail and on the back of the legs. In adult animals, the mane is often lightened. The following colors occur:

The Story of the Chow-Chow 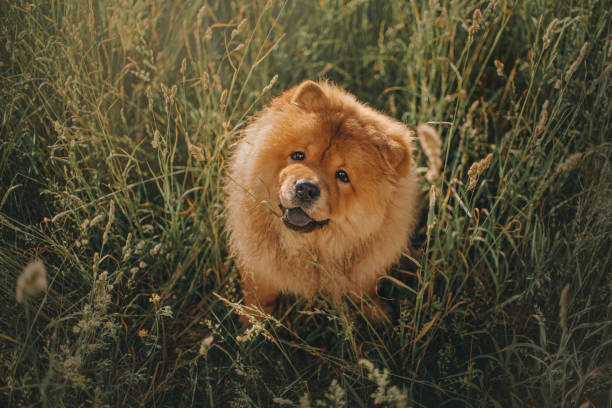 In the 13th century, Marco Polo first reported on chow-chows, which were used as sled dogs in northern China. Previously, the breed was completely unknown in Europe, but they have been used in China for thousands of years for various purposes: they served as guard dogs, were used for hunting, and were possibly also kept as war dogs in the Tang Dynasty. A rumor has been circulating on the internet that a Tang Dynasty emperor kept 5,000 chow chows for war purposes. The word “chow” means “food” in many Chinese cultures. It has been proven that the dogs were also bred for consumption in China.