Chinese Crested dogs are rarely found in this country. The hairless variant with a tuft of hair and socks undoubtedly draws a lot of attention on the street. Her unusual hairstyle is not shaved but only grows naturally on the legs and head. Because of their fluffy fur, the hairy crested dogs are called Powder Puff. We summarize all advantages and problems of the friendly little one for you:

Contents hide
1 The Graceful Toy Dog from China: Characteristics of the Chinese Crested Dog
1.1 The Chinese crested dog from the forelock to the tail flag
2 A Dog Like a Hot Water Bottle: Skin and Hair by Hairless and Powder Puffs
2.1 Hairless crested dogs
2.2 The natural 80s rock star look
2.3 Powder Puff
2.4 Colorful selection when buying a puppy
2.5 Similar dog breeds
3 The History of the Chinese Crested Dogs: Welcome Immigrants

The Graceful Toy Dog from China: Characteristics of the Chinese Crested Dog

With an average height at the withers of 28 to 33 cm for males and 23 to 30 cm for females, the Chinese crested dog is one of the smallest dog breeds, the so-called toy dog. Bred for thousands of years as companion dogs and ratters, they are agile and rather delicately built. The weight is not specified in the FCI standard but is between 4.5 and 5.9 kg for most representatives of the breed.

The Chinese crested dog from the forelock to the tail flag 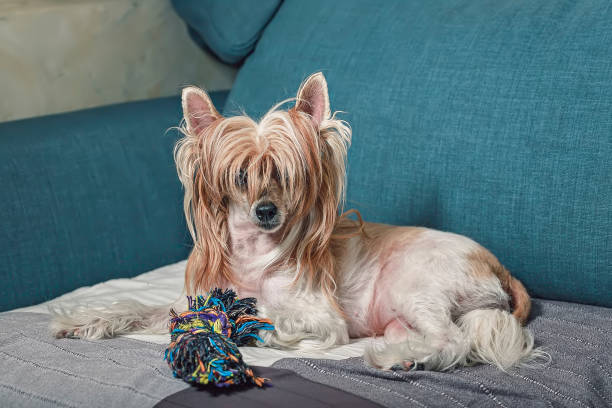 A Dog Like a Hot Water Bottle: Skin and Hair by Hairless and Powder Puffs

The hairless variant of the Chinese Crested dog has soft, wrinkle-free skin that is very warm to the touch, but not warmer or colder than hairy dogs. It can appear solid pink, liver, gray, or black, with stippled patterns and spots in all combinations also appearing more frequently. In the hairless crested dog, hair grows without an undercoat in the following places:

The fully haired Powder Puff variant of the breed sports long, soft fur with a fine undercoat all over its body. The coat color changes noticeably over the course of a dog’s life, mostly from dark to light, but spots of color and spots can also appear or disappear.

Colorful selection when buying a puppy

All coat colors are permissible in breeding and occur in the breed’s genetic lines. Some breeders focus on specific colors, others deliberately leave the coloring of the puppies to chance. These coat colors occur:

The Chinese crested dog is almost unmistakable in both variants. Certain similarities exist with the Shih Tzu, which, in contrast to the Crested Dog, has a shortened snout. Bichons have a similar build but are more compact overall and tend to have curly hair. The breed is easily distinguished from the Chihuahua by its unusual hairstyle.

The History of the Chinese Crested Dogs: Welcome Immigrants 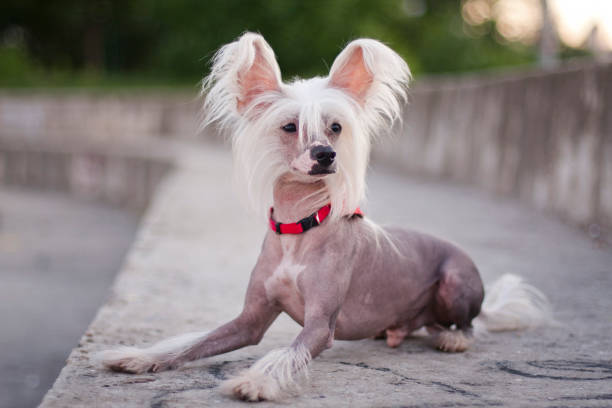 Chinese crested dogs were kept at Chinese courts as early as the Han Dynasty, about 200 years before our present era. Hairless dogs from Africa with the FOXI3 gene for hairlessness were carried along by Chinese seafarers because they rarely carried fleas. The Chinese nobility took a great interest in the unknown breed and chose the smallest and friendliest among them for breeding. By sea, the Chinese Ship Dogs conquered many port cities around the world. They have been common in Europe since the mid-19th century.