The Scottish Staghound (better known as the Deerhound) has been used to hunt deer for centuries and has changed little over time. Despite its size and strong build, the greyhound is agile and graceful in movement. Deerhounds are eager to please their master and are easy to train – you can find out here what to look out for if you want to keep one of the noble giants.

Scottish Deerhounds resemble their fellow greyhounds in many ways, but as the Irish Greyhound, they are significantly larger than most other sighthound breeds. According to the FCI breed standard, males should reach a height at the withers of at least 76 cm, for bitches a minimum height of 71 cm is prescribed. Despite their imposing size, the dogs are slim and relatively light: males should weigh about 45.5 kg, and females should ideally weigh 36.5 cm.

The Scottish Deerhound from head to tail 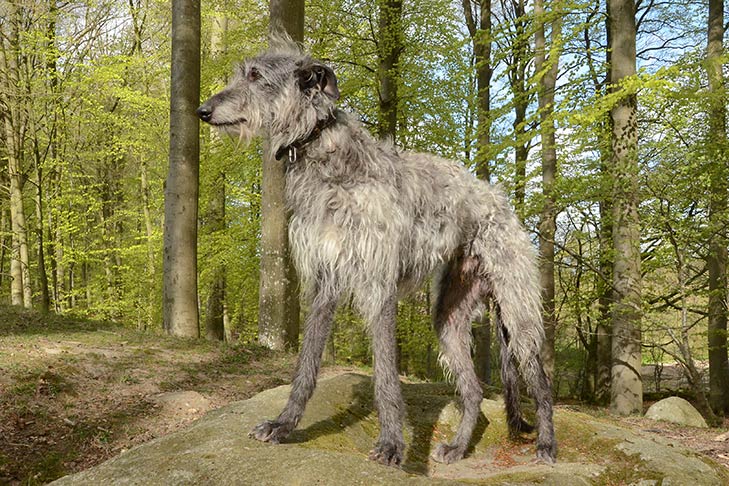 The Deerhound’s shaggy and rough hair reaches 8 to 10 cm in length on the back, sides, and chest. The hair on the belly and the inside of the legs are less bristly. Blue-grey and varying shades of dark gray to light gray are the most common. However, far more monochromatic coat colors are permitted for breeding:

Deerhounds and similar sighthounds: how to recognize deerhounds?

The Origin of the Scottish Deerhound 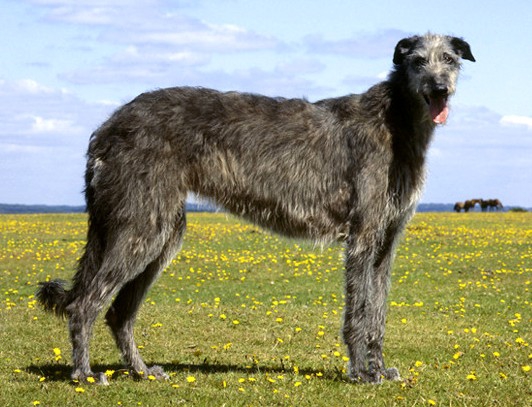 The history of the great greyhounds of Scotland can be traced back to Roman times and beyond. It has been proven that the first greyhound-like hounds were brought to Scotland by Phoenician traders. The Irish wolfhound was being bred at about the same time as the slender and hardy deerhound. Although the Scottish Deerhound is believed to have descended from the Irish Wolfhound, it is not clear which breed is older.

Even in Celtic times, Deerhounds were used to hunt deer. They are powerful and fast enough to take down a full-grown deer, so they are still used for hunting today. In the 19th century, loyal hunting dogs also became popular with the English nobility, and parallel show breeding lines formed.

Nature and Character of the Deerhound

The dogs are known for their calm and balanced nature and their loyalty to the owner. Once they have recognized a human as the “leader of the pack”, they are easy to train and always try to please. Therefore, if you are looking for a large dog but have only had experience with small and medium-sized dog breeds, the Scottish Deerhound could be a suitable candidate.