Those who do not know the breed quickly mistake the whippet for a young greyhound. The small English greyhound was formerly used to hunt rabbits and is one of the fastest breeds in the world with a top speed of around 60 km/h. Today it is hardly ever used for racing or hunting and adapts very well as a family dog.

Contents hide
1 The Little Whippet with the Shyly Carried Tail
1.1 Identifying features
1.2 The many colors
1.3 Markings and spotting
2 The Origins of Whippets – Dog of the Poor or Dog of the Rich?
2.1 Noble dogs with ancient roots
2.2 Close relatives of the breed
2.3 The snap dog and its tasks
3 The Nature of the Whippet – Faithful Companion for All Situations
3.1 Sporty but sensitive

The Little Whippet with the Shyly Carried Tail

Whippets are clearly recognizable by their height and very graceful physique. The facial expression is fat, the tail is carried between the hind legs, which sometimes makes him appear shy. Measured at the withers, males reach a height of 47 to 51 cm, females between 44 and 47 cm. A specific weight is not specified in the FCI breed standard but is usually between 9.1 and 19.1 kg. 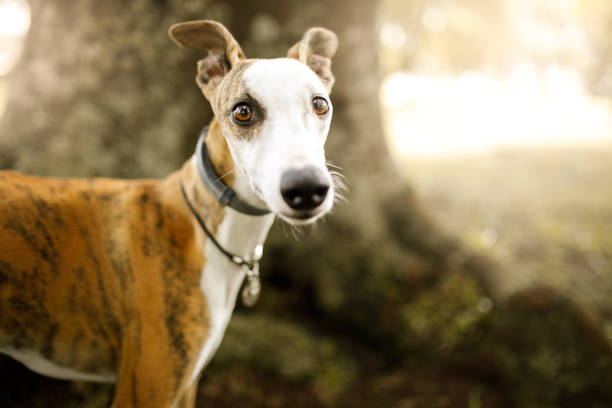 The greyhound’s coat is very short and lies flat against the body. Apart from merle colors, all colors are allowed. These colorings are the most common:

There are completely different theories about the origin of the whippets. Most breed enthusiasts accept the theory that whippets originated in northern England in the 18th and 19th centuries. Hobbies of the English upper class at this time included hunting and dog breeding. Greyhounds have been crossed with terrier-like breeds to create small and agile hunting dogs. But miners also used greyhound-like hounds to catch rabbits – the smaller such a hound was, the cheaper it was to feed.

Some whippet kennels state that the history of the dogs originated in Egypt and from there made their way to Rome and ultimately to Britain. Sighthounds have been depicted in works of art and pottery for thousands of years. The first portraits of small rose-eared greyhounds (outwardly indistinguishable from whippets) were made in the 14th century.

Close relatives of the breed

The snap dog and its tasks

Whippets were kept by English miners and used for the so-called snap-dog game. In this game, rats or rabbits were released in a fenced area. The whippet that caught the most prey in a given period of time won the game. That’s why he’s also known as Snap Dog to this day. Whippet racing was popular in the 1930s but has not caught on overtime. The breed is rarely used for professional racing today, although top speeds are every bit as good as greyhounds and other sighthounds.

The Nature of the Whippet – Faithful Companion for All Situations

Whippets are universally described as the “perfect breed”. They are sweet and friendly to their peers and people, and they excel as companion dogs and working dogs. Your dog adapts to your everyday life and your lifestyle: With a calm and comfortable owner, the four-legged friend also develops into a balanced friend, in sporty and active families he becomes a lively joker.

With their thin fur and graceful physique, these athletic dogs are not exactly robust. They shy away from rainy weather and like it warm and snuggly instead of uncomfortable and damp. So they are not really outdoor dogs and they tremble easily when they are cold or when they are nervous.