Since the life of guinea pigs mostly takes place in the enclosure, this should be designed as interesting as possible. With a few design tips and creative ideas, an ordinary guinea pig cage can quickly become an individual home for a long and varied rodent life.

Before you decide to take in a guinea pig as a family member, you should first look around for a suitable enclosure. You can either build this yourself with a little manual skill or buy it from a specialist dealer. If it has bars, you should make sure that the bars are rounded to rule out any risk of injury to your guinea pigs.

How big should a guinea pig cage be? 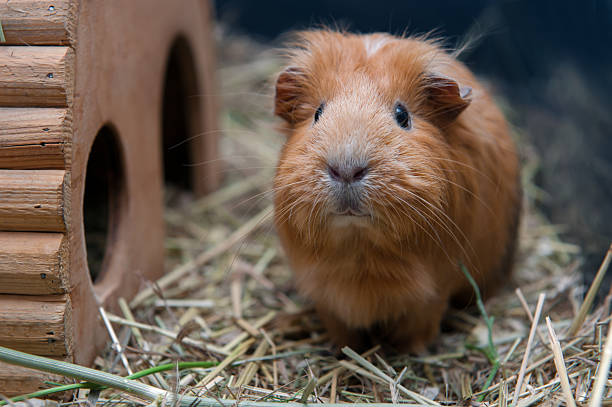 When choosing the right cage size, you should aim for a size of at least 0.5 m² per animal. Since keeping guinea pigs in pairs is now the standard for species-appropriate keeping, a guinea pig enclosure should be at least one square meter in size.

This space seems quite large at first, but the basic equipment alone takes up a large proportion of this space. These include:

A guinea pig cage should not be haphazard but purposefully divided into different areas. It is important here to separate the living and feeding areas and an area for the fitness of the animals with free areas that allow sufficient exercise.

Especially with larger groups of animals, the separated areas ensure that there is no unnecessary stress among the guinea pigs. Because the needs of animals can be very different, just like those of people. Guinea pigs that need more rest and sleep are not disturbed by their more active conspecifics.

The feeding area of ​​guinea pigs

Since hay is one of the main components of a guinea pig’s diet, you should offer it to the animals in a central area of ​​the cage. The best way to do this is to use a hay rack, for example, the Elgato* hay rack. You can attach a hay rack either in or on the cage. In this way, you ensure that the hay does not get dirty and that the guinea pigs always have enough of it.

The separate feeding bowls should be large enough for several animals to eat at the same time. You can provide your guinea pigs with water either in a water bowl or a drinking bottle. The latter does not need to be changed as often and is also not contaminated by feed or bedding.

With a food ball or food tree, you also ensure sufficient activity when eating. Food balls such as the rodent food ball from Kerbl* can be hung up, food trees (e.g. available from Nagergaleria*) are attached to the floor. The guinea pig can playfully get the delicious content as a reward by trying it out and making a little effort. Food balls can also be bought with a bell, which is then used as an additional toy.

The living area of ​​guinea pigs

The living area of ​​the cage is where the guinea pigs sleep and rest. You can let your creativity run free: The houses can be arranged in different corners of the guinea pig cage or placed next to each other like in a small village. It is important to note: 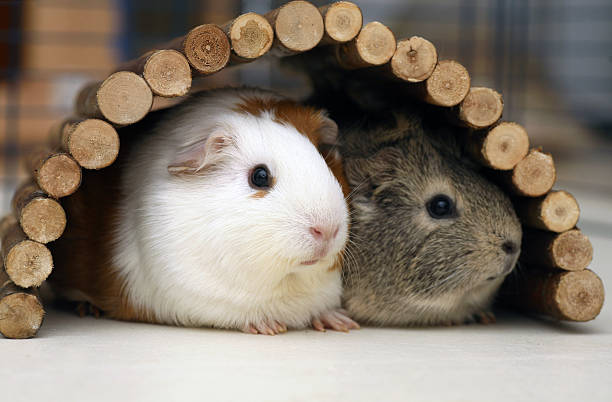 Even a guinea pig that looks rather cozy at first glance can hide a real sports ace. That’s why it’s important to reserve a space in a guinea pig cage for exercise and to include exercise and play facilities for the guinea pigs. Tailored to the age of the animals, seesaws, hammocks, and the like train the fitness and dexterity of your guinea pigs. You can even set up your own fitness course with tubes made of stable carpet rolls and obstacles. You can use both branches and stones to design these obstacles. The stones help to care for the claws and do not allow them to grow too long.

Fruit trees such as apple or pear branches can even be placed with leaves in the fitness area of ​​the guinea pig cage, as the leaves and branches can also be used as food without hesitation. A feeding tree can also be set up in the fitness area. This is peppered with small rewards such as carrots or cucumbers and can only be reached by the guinea pigs by stretching and skill. After all, after so many sporting activities, your guinea pig more than deserves a little tasty extra.

For additional exercise, you should also allow your guinea pigs to roam freely in the apartment on a regular basis. Make sure that there are no sources of danger for the guinea pig.