This article is written for those who want to get an active, friendly dog ​​and are ready to give it enough time and attention. The English Springer Spaniel is a hunter by nature. He needs to walk up to 3 hours a day and must be prepared for the fact that even a show dog wants to run a lot. Springs, on the other hand, are great at behaving with children and becoming good companions. Read on for how to choose a dog, how to feed it, and how to raise it. 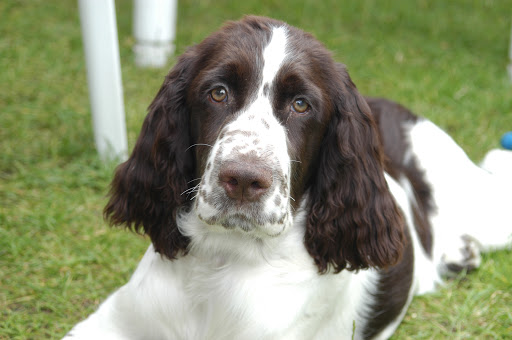 English spaniels were among the first and became the ancestors of all other varieties of these dogs. The English Springer Spaniel breed belongs to the hunting gun-dog and was bred in the XIV century in Great Britain for aristocratic hunting fun. The homeland of the Springer is Norfolk County. The ancestors of these dogs were larger Field Spaniels, which are similar in appearance to setters.

Originally, Springer Spaniels were trained for falconry. They looked for and drove game, but gradually they were taught the skills to report, to bring prey in their teeth, to be excellent companions. As one of the oldest breeds, the English Springer Spaniel is distinguished by its purity of origin. The description and image of these dogs can be found in the book by John Caius in 1576, where the dog is depicted at the time of the hunt. Due to the great popularity that the breed enjoyed in 19th century Wales, they are also called Welsh.

Over time, the appearance of the English Springer Spaniel has changed. There are more color options. Initially, they were only brown-red-white, now there are up to 6 variants of color combinations. In the twentieth century, the popularity of the breed has increased so much that it has spread across all continents. Springs who are taken to exhibitions are somewhat different from workers, but they get along well with children and have a gentle, friendly character. 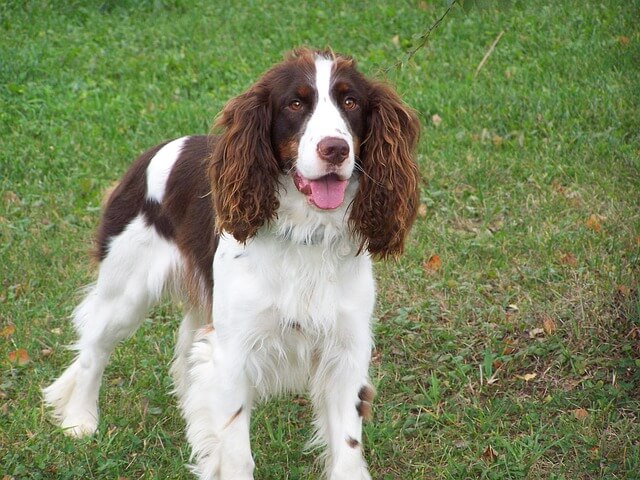 An elegant, beautiful and large dog for its breed group, outwardly being something between a setter and a spaniel. The muzzle, characteristic of all spaniels, is of medium length, covered with short, smooth hair, between the eye hollows. The ears are set low, long, but shorter than those of other spaniels. The back is straight, the legs are rather high, which is why the springer, unlike other, more stretched spaniels, is written off in a square. The tail is set high, docked by 2/3. There are membranes between people, which allows the dog to swim well and move around swampy areas (although it is more often used for hunting land fowl).

The coat is silky, wavy on the ears, of medium length (the longest on the chest, paws, and ears).

The most common color, which is the calling card of the breed, is brown piebald with specks (especially there are many of them on the paws and muzzle), but all colors accepted in spaniels are acceptable. 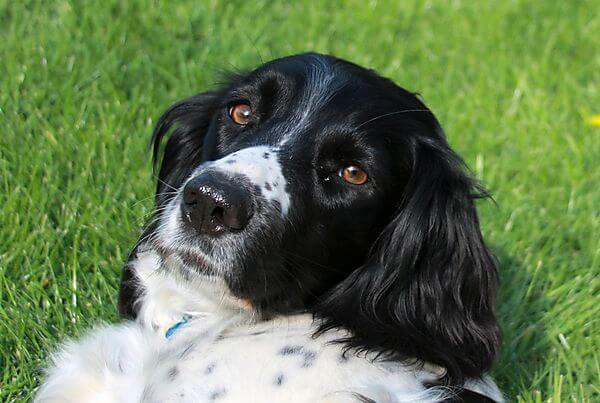 They adore their family and enjoy every minute they spend together. Moreover, it is desirable that the family was larger. The Springer Spaniel is a true extrovert, open to new acquaintances and experiences. He is glad to any meeting, be it an adult, a child, or another dog. Moreover, these hunters even get acquainted with huge wolfhounds, inviting them to play. Sometimes the giants of the canine world do not even know what to do with a small spaniel that is spinning under their feet but puzzled by his fearlessness and open benevolence, they do not snap or attack, and sometimes awkwardly take part in his fun games.

At home, the Springer is a tireless “perpetual motion machine”. He runs with his tail after the owner, takes part in all his affairs, and is ready to support any venture.

The hunting instincts of these spaniels are, perhaps, more developed than those of many other breeds, so on a walk, he is ready to make the oncoming cat, a pigeon, and a duck on the pond in the park a game. 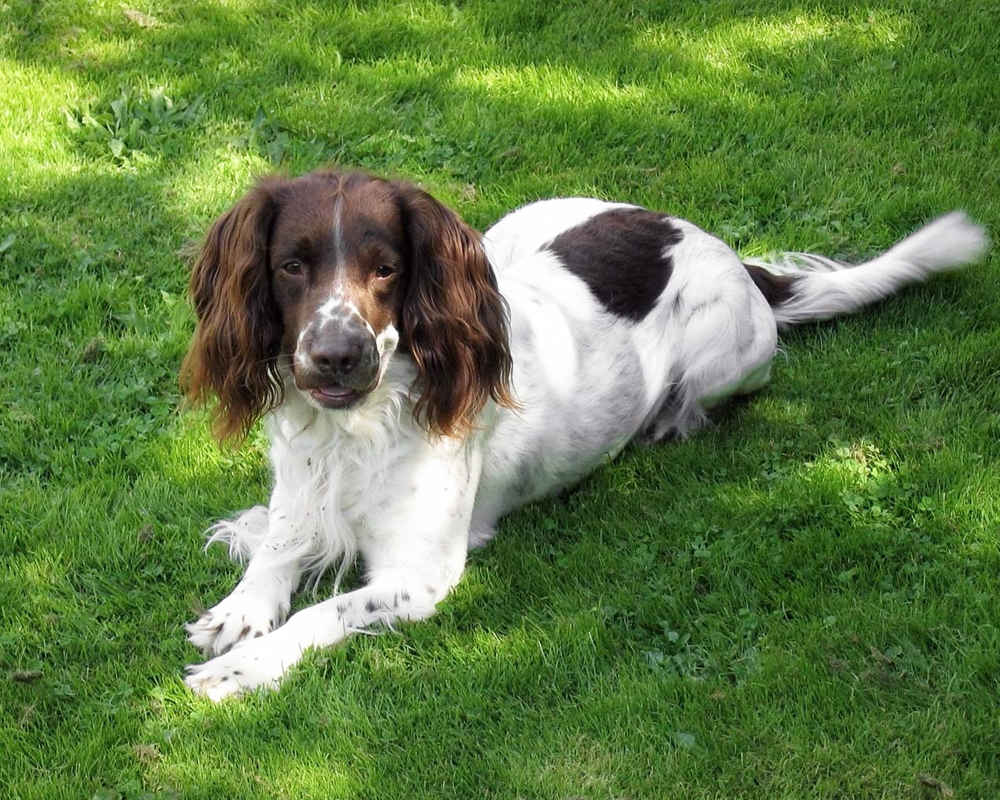 Springer Spaniels, like other dogs of this breed group, are absolutely problem-free in keeping, except for their hyperactivity. However, this cannot be called a disadvantage, for many people absorbed in their daily routine, and an eared optimist is a real lifeline.

Springer is not demanding to food, moreover, they are often omnivorous in general, however, this does not mean that the dog can be fed with anything – it will definitely not benefit his health.

The grooming of the spaniel’s coat is minimal – just brushing it once a week is enough. But their long ears require attention – they need to be cleaned at least once every 10 days.

And, of course, with springers you need to walk a lot and go hunting – without this, dogs will feel inferior and may even become depressed. 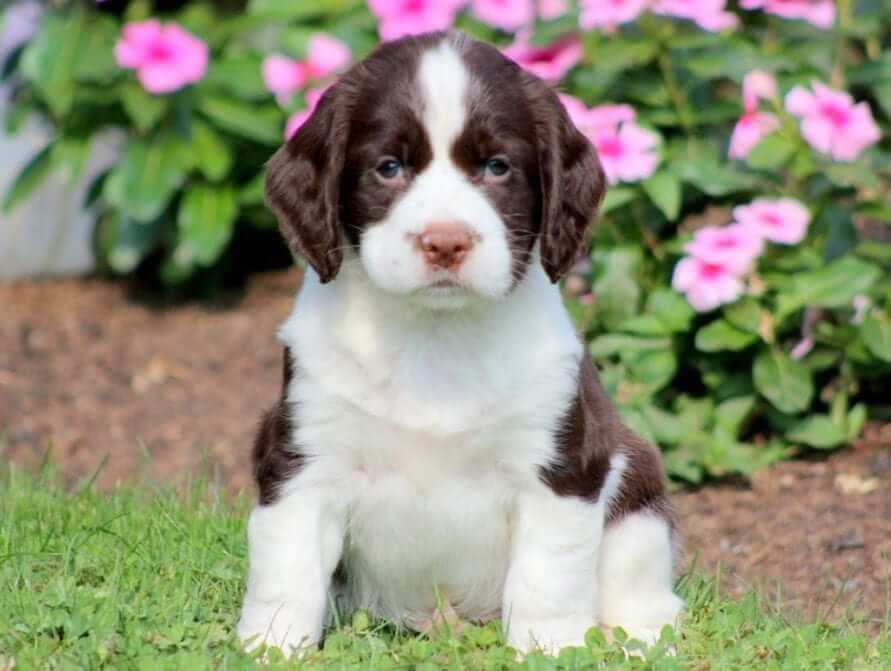 Of course, every hunting dog is trained in his craft, but this does not mean that he does not need general training. And here it is important not to miss the moment.

The upbringing of a young spaniel should be started from early childhood, and the most important thing that a puppy should learn is the concept of “can” and “not”. I must say that springers, like all four-legged hunters, are quite stubborn and wayward creatures, and the baby will definitely try to impose his will on you. At first, this will manifest itself in small things: for example, the puppy will begin to whine loudly, asking for a bed. And, if at this moment you go on about him, take him to his bed, then next time he will realize (and you can’t deny it in your mind) that you can get anything from the owner by screaming. And then the training process will go much harder.

Therefore, you need to work with these eared ears, armed with willpower, patience, and, of course, love. Remember that you won’t get anything out of a springer by force. Be persistent, firm, confident, but calm. And it is better to turn the process of classes into a game, otherwise, the dog will quickly begin to be distracted and stop listening.

It is very important to teach your spaniel to approach on the first command. This is useful both for hunting and just for a walk because this loving Englishman can follow someone outsider whom he found interesting at the moment, or just, playing, run away somewhere far away and get lost. 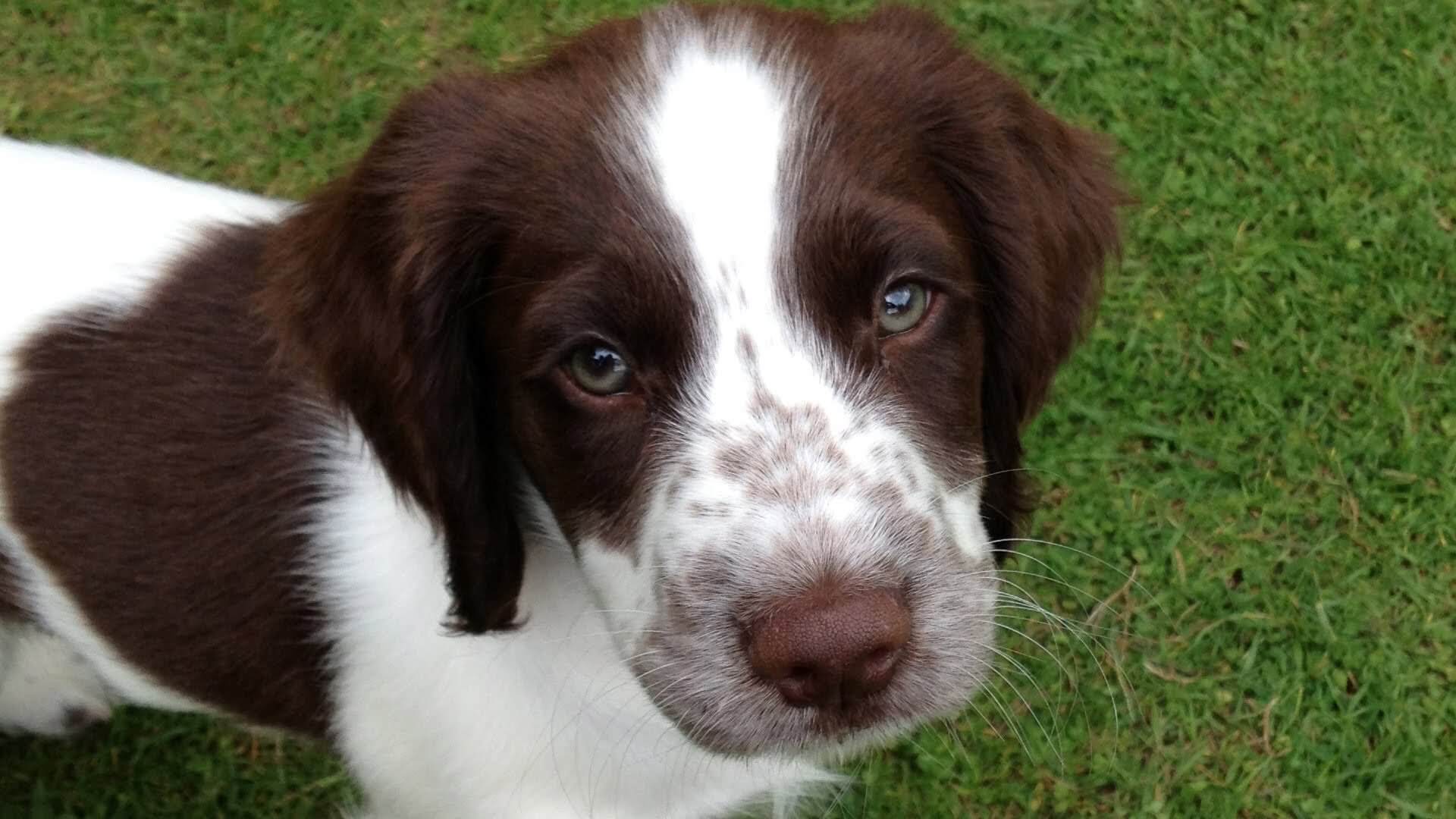 Like all ancient breeds, the Springer Spaniel has already gone through natural selection, so the breed does not have any specific health problems. Unless the ears are their weak point, so they should be cleaned as often as possible, because there is no air circulation under these huge burdocks, and therefore bacteria easily multiply.

In winter, it is also worth keeping an eye on the spaniel’s paws – icicles often form on its membranes, which prevent the dog from walking.

Otherwise, Springer Spaniels are more likely to suffer from all sorts of injuries, because they are completely unaware of the fear and often climb where they should not. However, if you take good care of your dog and get all vaccinations on time, the spaniel will live a long and healthy life. 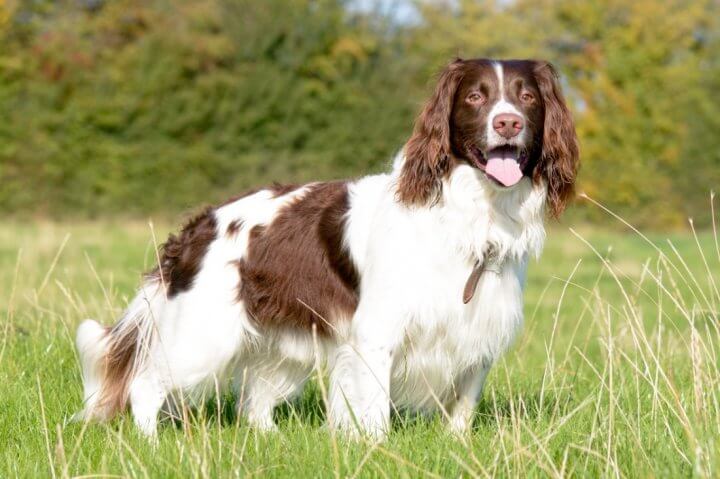 English Springer Spaniel puppies require careful attention, this concerns, first of all, nutrition. The baby spaniel’s diet is fully balanced, full of essential nutrients and vitamins. Small puppies are fed up to 6 times a day, it is recommended to transfer an 8-month-old dog to two meals a day. Breakfast certainly includes fermented milk products. Combinations of low-fat cottage cheese and kefir are useful, yogurt is well suited. Sometimes honey and calcium are added to the curd.

The dog must receive sufficient amounts of meat. Do not give pork. Lean beef is a good option. Acceptable cereals will be rice and buckwheat, dietary cereals, full of vitamins, hearty. It is good to give a boiled egg a couple of times a week. It is useful to periodically replace meat with fish, not to exclude vegetables and fruits from the diet, it is important that the latter do not turn out to be sour. Choose a balanced diet.

How to feed an English Springer Spaniel is up to the breeder, natural food can be easily replaced with food if desired. Gradually, you will need to add vitamins and minerals necessary for the full development of the pet.

The Word to the Breeder 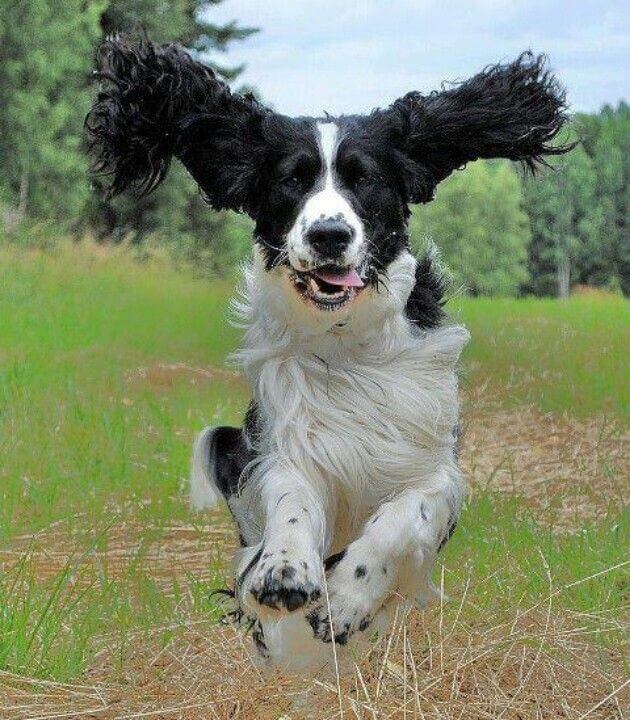 The English Springer Spaniel is a dog for all time, it is a companion with an endless supply of energy, suitable for an owner who is ready to give him as much time as he deserves.

These dogs are widely known as police bloodhounds, as hunting assistants, and as stars of rings and exhibitions. The breed standard says: “They are symmetrically built, compact, strong, cheerful and active dogs. The tallest and brightest of all British spaniels. ” But do not forget that Springer Spaniels were bred to work, so it is very important to train and train them.