Mastiffs are large stocky dogs characterized by a similar appearance, body structure, and characters. There are only 8 species belonging to the Mastiff type, but in fact, many service large dogs originated from them.

All representatives of the Molossian section have similar typical features: a large, heavy body, wrinkled muzzle, broad skull, well-developed muscles, and strong bones. There are 8 main types of Mastiffs:

The largest of all representatives. His height is about 70-75 cm, and his weight is equal to 100 kg. Well built, muscular. The colors are different: peach, silver, beige. A distinctive feature is a black mask on the face and head. The coat is short. 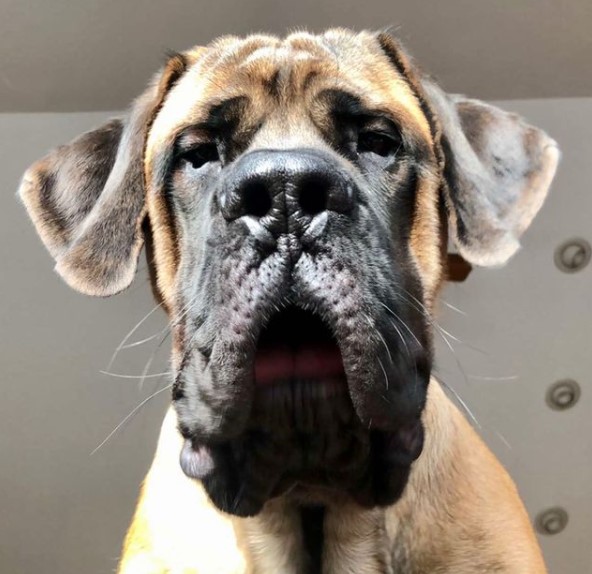 Reaches 60-70 cm, weighs about 50 kg. The most graceful and majestic of the 8 representatives. Color – ash black with a white speck on the chest. Its muzzle is one of the wrinkled among all Molossians. 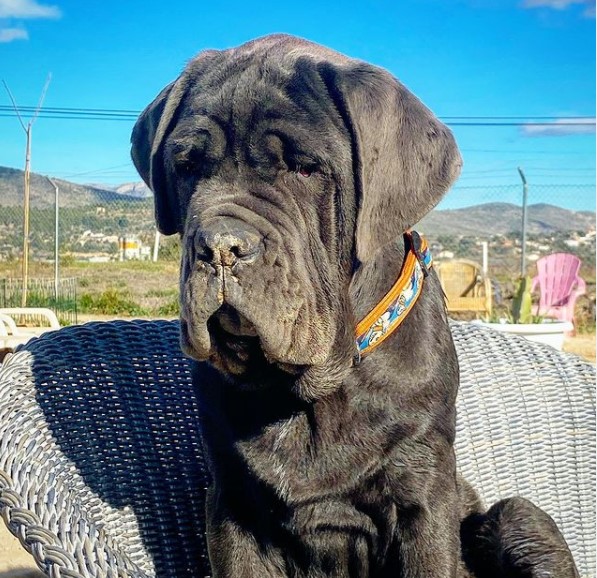 A large representative reaches 70-75 cm, weighs 80-85 kg. A characteristic difference is a short, but thick coat like Alabai’s, a skin dewlap on the neck. Color – from milky white to the golden nut. 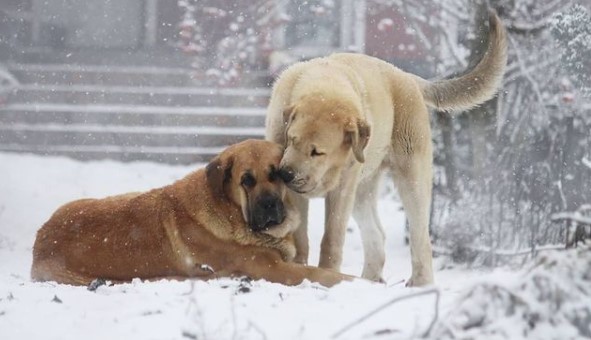 One of the best guards. Differs in moderate aggressiveness and toned slender body. It is not as big as English or Spanish. Only 60 cm at the withers. Obedient, diligent, one of the few well-trained Molossians. 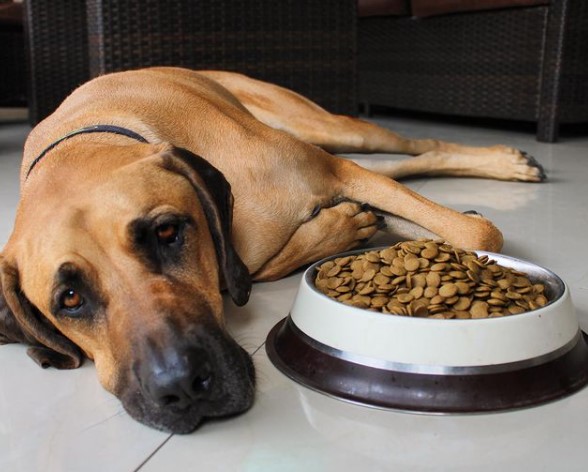 A wonderful pet. Small – 50-60 cm with a weight of 50-60 kg. Color – any, characterized by a black mask, black spots on the ears, and chest spots. Obtained as the fruit of mating Bulldog and Mastiff. 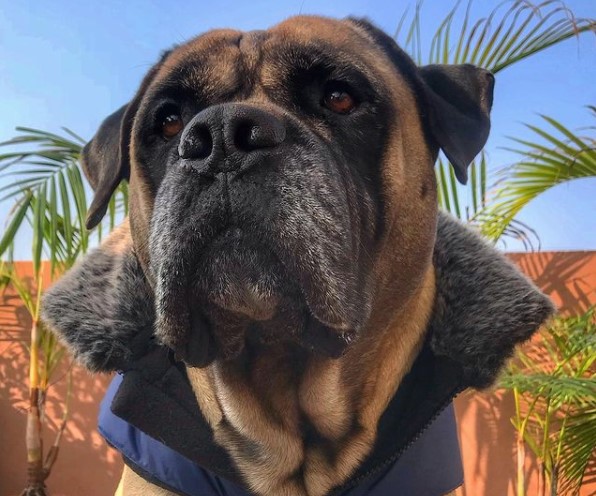 It also has a second name – French Mastiff. A distinctive feature is the only color – orange-red. The muzzle of this dog is slightly upturned, a black or red mask is characteristic. In character, it does not differ from fellows. 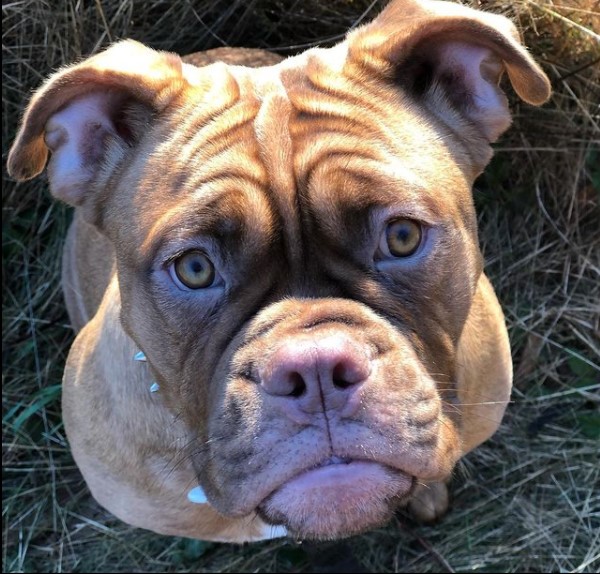 The most original of the family is a rather stubborn breed. A distinctive feature is a small number of skin folds on the head and a narrowish skull. Representatives are fit and slender. Miniature in weight (from 30 to 60 kg). 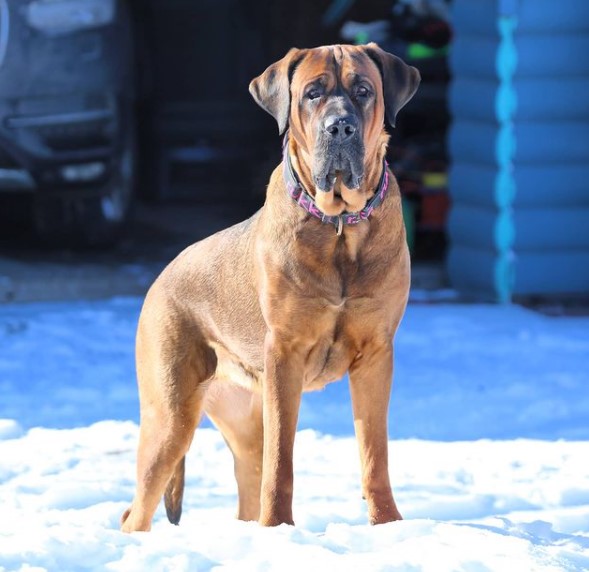 One of the most expensive breeds in the world. It has a long, thick coat, thanks to which it easily tolerates frost. It is considered the best dog of oriental origin. 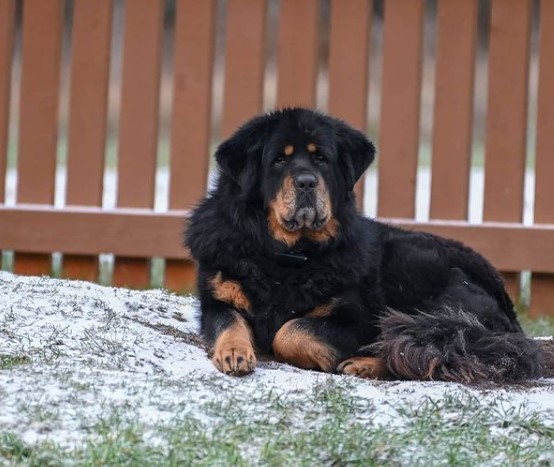 Another name for the dog is Dogo Argentino. Perfect for hunting and service. Has a short snow-white coat, but slight darkening is allowed in the area of ​​the ears and eyes. 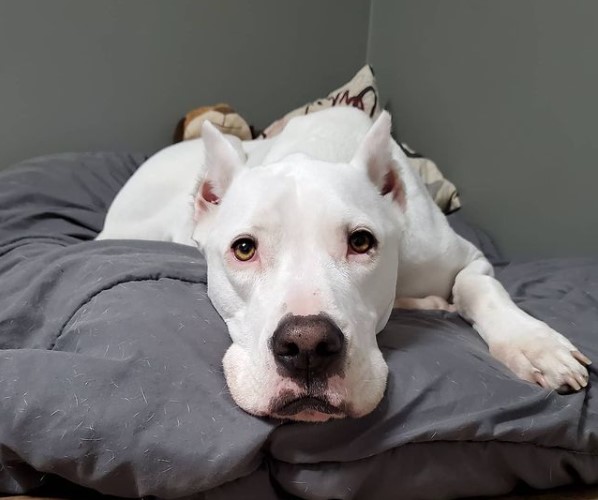 History of the Mastiff Breed 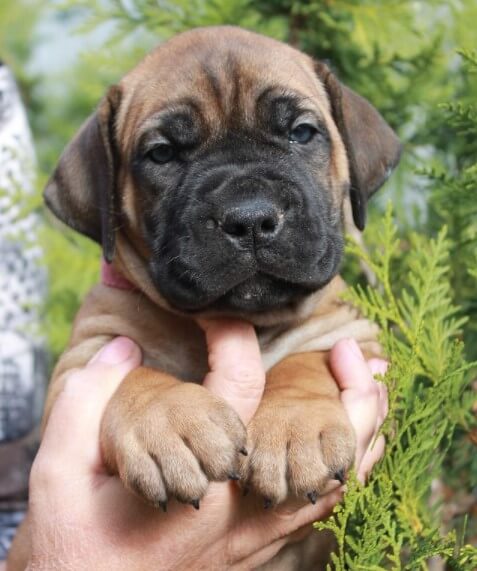 The Mastiff breed is one of the oldest dog breeds in the world and is descended from Molossians – ancient dogs from which many modern breeds have descended. The brightest representatives of the Molossians are large in size and are in many ways similar to each other. For example, the Central Asian Shepherd Dog (aka Alabai), St. Bernard, Rottweiler, and many other dogs also descend from Molossians.

Molossians were large, powerful, fearless animals that survived in the difficult conditions of the ancient world, withstood the cold and various adversities. People used these dogs not only to guard livestock, protect homes, property but also for hunting and war. Subsequently, when Molossians began to divide into certain breeds, they gradually spread to many parts of the world, primarily across the European continent and the Middle East.

In the palace of the ruler Ashurbanipal (7th century BC), archaeologists have found a bas-relief depicting large dogs, very similar to modern Mastiffs, fighting with lions and other predators. When Hannibal made his fantastic crossing over the Alps, his army also included the ancestors of the modern Mastiffs.

At a later time, the popularity of these dogs did not diminish in the least. The legendary ruler of the Mongol Empire, Kublai Khan, the grandson of Genghis Khan (13th century AD), according to legend, had a whole army of fighting mastiffs, including 5000 heads. He used these dogs both for military purposes and for hunting or entertainment. They have always been prized for their immense strength, endurance, dedication, and fearlessness in battle.

The Mastiff gained immense popularity in England, where they were purposefully bred until the 15th century. Of course, in those distant times, they were often used for various types of bloody sports – baiting bears, wild boars, and just dog fights. When in 1835 these types of entertainment were banned, the population of the English Mastiff breed began to decline rapidly, however, dog shows in the early 20th century played a positive role.

The first and second wars also brought the breed to the brink of extinction today, however, through the efforts of the English world breeders, the breed is one of the most recognizable in the whole world. 32nd place among 155 breeds and types recognized by the American Kennel Club – the numbers speak for themselves. 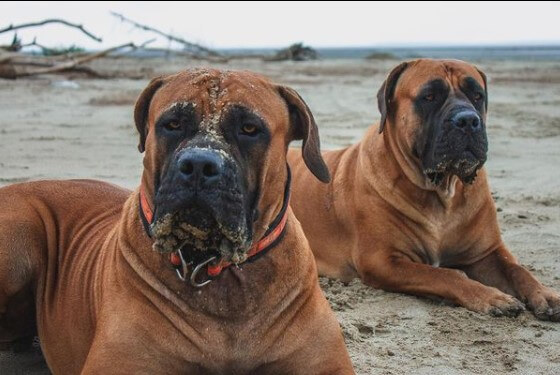 They are large, powerful dogs, with a developed chest, long legs, and a muscular build. They gain weight well, have a powerful neck and a flat forehead with a protrusion. The ears are flat, hanging down the sides of the head. The muzzle and mouth are large, with an abundance of folds. The tail is usually docked, although not always, and the ears are left intact. 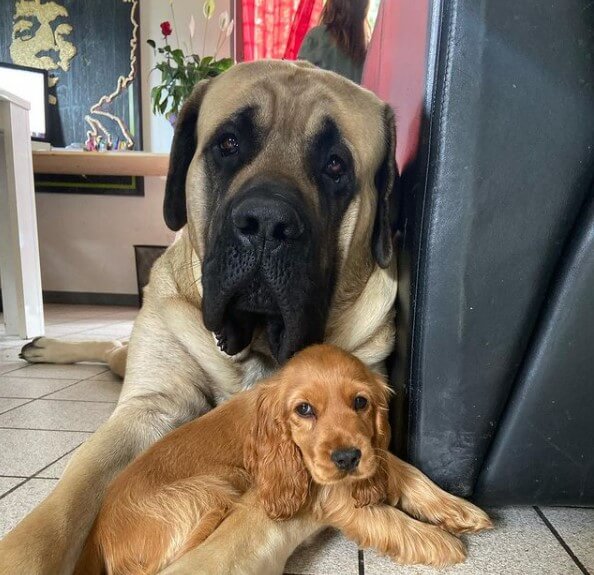 Despite the menacing appearance, for the most part, Mastiffs are kind dogs with a friendly disposition. They are distinguished by the great devotion to their master and family, are balanced, and treat children well. But, if the child is too small, be careful – this is a large dog, and it can accidentally knock the child down even with a simple movement.

They perfectly understand people, have developed intellect, and need constant stimulation of mental activity. The Mastiff breed loves walking on the street and generally loves to be outdoors, but because when buying a puppy, you should think about the conditions that you can offer him. After all, both its size and its personal preferences indicate that it is highly desirable to live in the private sector, and not in a city apartment. But, they are very adaptable.

These dogs need proper education and training, they understand well what is happening, and therefore do not tolerate injustice and rudeness. Moreover, this also applies to quarrels within the family. Strangers are treated with caution, but without undue aggression. Some individuals show increased protective instincts, and therefore you need to socialize your dog from an early age. 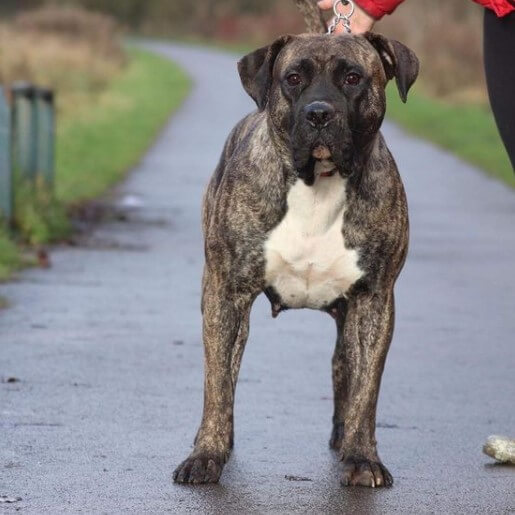 The Mastiff breed has a sharp mind, due to which it understands the owner and his requirements well. If you want to train her for protection, then it is important to achieve from the dog, such as size and strength, absolute obedience that sometimes is not easy. Especially if in a fight with another dog, your pet, so to speak, got a taste, you can often stop it only with your own hands.

It is necessary to conduct daily training, starting from an early age (6-8 months), to achieve high-quality command execution. At first, it will not be easy, as a young dog wants to run and play, so at first, you can give training in a playful way and be patient. Gradually, more attention can be paid to the execution of commands, showing praise for success. Be sure to interact with other dog owners so that your Mastiff gets used to both humans and other animals. For specialized training, it is best to hire a professional. 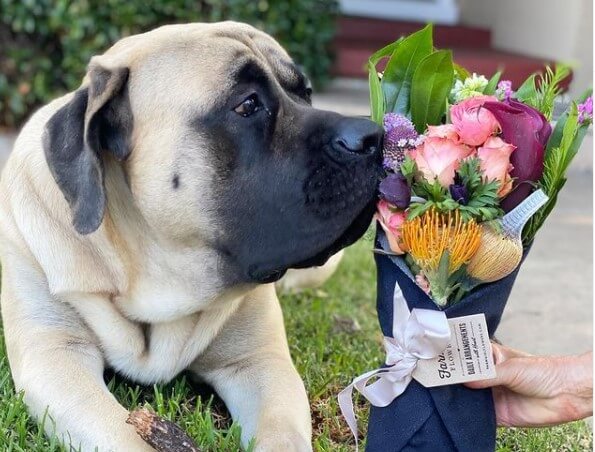 The Mastiff breed is mostly smooth-haired and therefore requires only weekly brushing. Long-haired dogs require more grooming. They have one negative trait – a tendency to increased salivation, and many also say that the Mastiff is prone to increased gas production. Keep your ears and eyes clean, bathe your pet at least once a week, and preferably twice a week, and trim your nails in time. 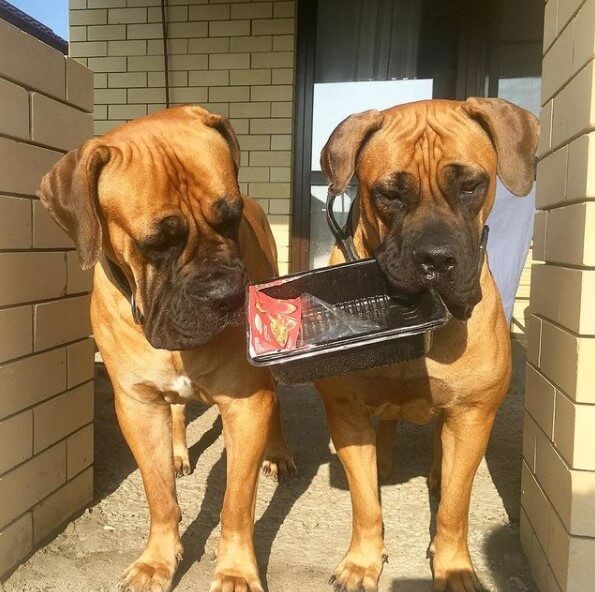 Mastiffs are very large animals that quickly gain fat mass and grow. It is very important to choose the right diet for them so that the products go to their advantage, the dog is full and healthy, and the extra calories do not accumulate in the body.

Up to 4 months of age, puppies are fed 5 times a day, gradually reducing the number of meals (up to 1 year). An adult dog should eat well 2 times a day.

Puppies are fed with cottage cheese. If the dog doesn’t like such a treat, you should prepare a casserole for him.

Foods fed to a pet should not contain more than 25% protein. Otherwise, it will lead to a sharp increase in the growth of the pet. That is fraught with diseases of the tendons and joints.

The ratio of products can be as follows:

The number of the latter will depend on their type and purpose for use. As for the meat, it should not be fatty. It also needs to be cut into small pieces. 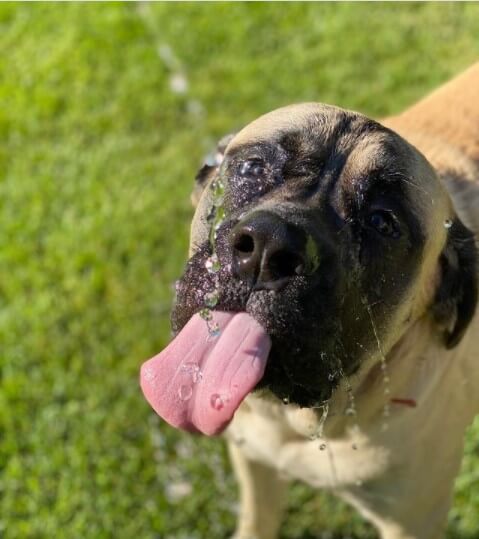 Mastiffs are quite healthy animals. But they are also characterized by some diseases. Namely:

Also, Mastiffs often have arthritis and are prone to obesity. 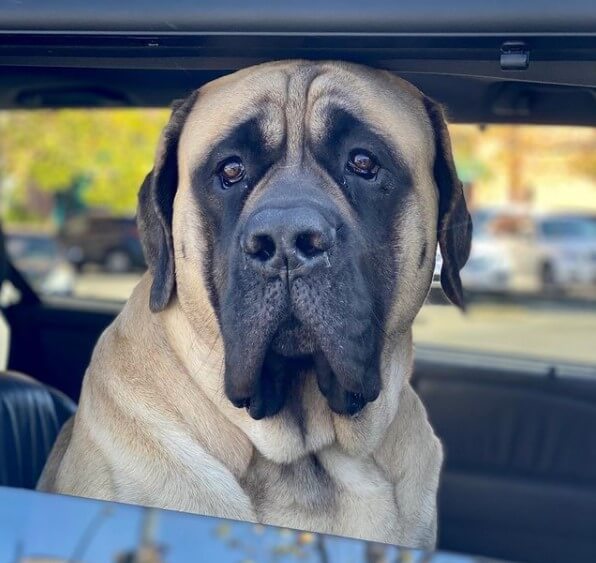 The dog is very kind and loyal, not capable of offending the weak. But in dangerous situations, the Mastiff will definitely protect his master. The pet is perfect for families with children and will not only become a good friend to them but also look after them. Don’t trust the stereotype that Mastiffs are lazy. Each dog has its own character.

The name “Mastiff” is a rather large group of breeds, which includes Tibetan, English, French, Neapolitan, South African, American, Brazilian, Pakistani, and other dogs with similar characteristics. It took more than a hundred years to breed the Japanese Mastiff breed.