The Great Dane is a loveable, good-natured, and boisterous partner. Due to its imposing dimensions and its athleticism, it is certainly not everyone’s dog. The supposedly low life expectancy also deters many dog lovers from taking a closer look at the Great Dane. Once she arrives, she is a wonderful four-legged friend with a big heart and alert mind.

History & Origin of the German Mastiff

The Great Danes are said to have been kept by the Assyrians as lumbering fighting dogs as long as 4,000 years ago, but the assumption has not been actually proven. The Do Khyi, better known to many as the Tibetan Mastiff, is said to be related to the Great Dane, but this claim has also been scientifically refuted.

However, the origin of the Great Dane can be fully traced back to the 16th century. The original Great Danes or their ancestors are the “English Docken / Englische Token” imported from England and consisted largely of an Irish Wolfhound and Mastiff cross, but with no standard or guidelines.

At that time, the term also included Hatzrüde, Saupacker, Ulmer Mastiff, as well as Danish and English Mastiffs. At courts of rank and nobility, the Apollo among the dogs, the mastiff, was welcome and was considered a status symbol for titles and wealth. However, towards the end of the 1900s, it lost its importance for hunting and was found more and more often in private households.

It was not until 1878 that a committee of judges and breeders decided on the uniform name of the Great Dane, laying the foundation for today’s breed.

A brief outline of the German Doggen Club (DDC) 1888 e.V. Just three years later, in 1880, the Great Dane breed standard was established. Another eight years later, in 1888, the Deutsche Doggen Club (DDC) 1888 e.V. was founded, which to this day advocates the preservation and compliance of the standards. The DDC is the oldest breed breeding association in Germany. With around 4,000 members divided into national groups and more than 80 local groups, the DDC and its members are a broad and good point of contact for all matters relating to the Great Dane. The result of centuries of work: 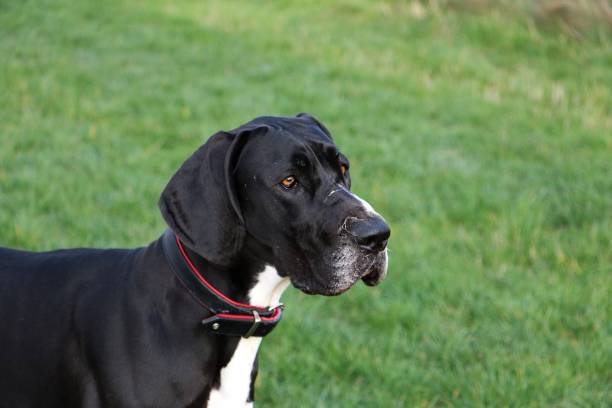 Today the Great Dane has a solid breeding base!

While the Great Dane was originally a true fighter who bravely stood in the way of deer and bears as a war dog or hunting dog, today it is recognized as a companion and protection dog and can be found much more often in family circles. Due to its imposing appearance, the Great Dane is used as a guard dog.

Character & Nature of the Great Dane

Great Danes are real charmers with an unmistakable character. They are loving, attentive, and particularly affectionate. It is not uncommon to see Great Danes perched on their owner’s laps. A curious picture, but it documents the affection and the desired closeness to the mistress and master very well. It is already written into the breed standard of the Great Dane: It should be courageous and persistent as well as easy to handle and docile and have a high stimulus threshold. Ideal conditions to secure a place in our ranks and families. Loud and persistent barking is foreign to the Great Dane. She is considered delicate and sensitive and a representative of soft tones. If she still barks, this usually has a good reason.

In dealing with family and children

Great Danes love children and are usually handled without any problems. Due to the sometimes stormy temper, children and Great Danes should only play in the presence of their parents to prevent injuries. However, this applies to all agile and particularly large dogs, as stormy movements are enough to knock children off their feet.

Great Danes are reserved and reserved towards strangers. They keep an eye on strangers without openly expressing distrust. While other dog breeds often vie for the favor of newcomers, the mastiff here is beyond reproach and only has eyes for its pack. She usually endures being stroked or withdraws on her own.

Great Danes are self-assured and self-assured dogs who know their strength but rarely (have to) show it off to other dogs. Through centuries of responsible breeding, they are usually very social and equipped with a high tolerance limit. However, these characteristics only apply or are much more likely to apply if the Great Dane is purchased from a reputable breeder and not from one of the so-called multipliers. Here, in the worst case, you get a dog that looks similar to a mastiff but may have a completely different character or behavior. This can also be noticeable when dealing with other dogs. 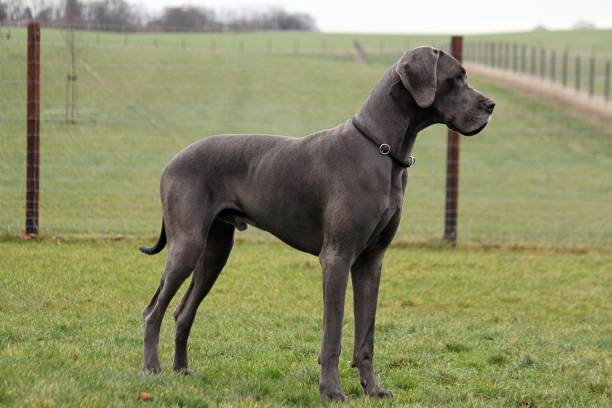 As with all dogs, it depends heavily on the individuals whether they are compatible with cats, birds, and rodents. However, there is a good chance that the Great Dane will accept a mixed pack and take cats and co. into its big heart.

The Great Dane is an athletic dog. Agile, spirited, and incredibly fast. She doesn’t actively ask for exercise, she’s too proud of that. Nevertheless, she appreciates long walks and can also be easily taken on a bike. But especially puppies and young dogs must not be overworked by their owners.