German Boxer – Understandably, the name evokes associations. And the fact that a boxer is a robust fellow cannot be dismissed out of hand. Nonetheless, German Boxers are peaceful and wonderful family dogs with a sunny disposition and a healthy level of alertness. The medium-sized four-legged friend is also sporty.

The Brabant Buller Biter is considered the direct ancestor of the German Boxer Dog. In the Middle Ages, bull biters were used at many princely courts in Europe to hunt game, regardless of whether it was a bear or a wild boar. With the invention of the first firearms, however, there was no more hunting and the industrious workhorse suddenly had no more use.

The subsequent crossbreeding of the Bulldog can be seen as the birth of the German Boxer as we know it today. The Boxer-Klub e.V. was founded in Munich in 1985 and set up the first uniform breed standard in 1904. This is still valid today and was accordingly recognized and adopted by the FCI.

The boxer achieved another milestone in 1924. Here it received approval as a service dog breed and was given a task that has been assigned to it to this day. The popularity of the boxer is also reflected in a large number of different associations and clubs that have been founded over the last century. 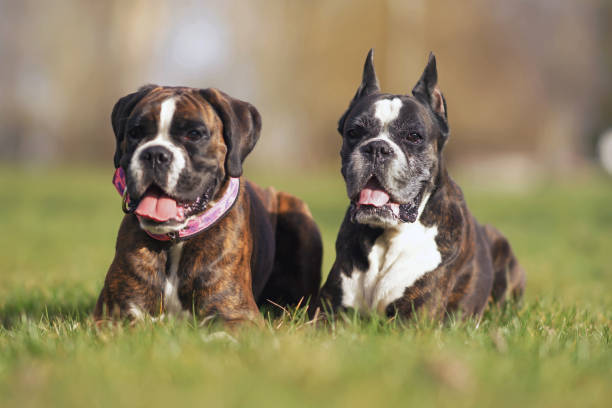 Today the German boxer is mainly a family dog. His days as a busy service dog are over in many parts of Germany. Only in Bavaria is it used more frequently.

The Character & Essence of the Boxer

Good-natured and balanced, this is how many owners describe the character and nature of the boxer. The breed standard dictates that the Boxer is strong of nerves, even-tempered, calm, and confident. In addition, he is a cuddly and playful companion with whom you can experience all sorts of fun. In addition, he is known for his keen sense and alertness. Coupled with a good portion of courage, he will protect his house, farm, and family and stand protectively in front of his own family.

The Boxer is a family dog. It is always a real delight to watch him interact with children. His affectionate, loyal nature often makes him an unwilling companion, but that’s exactly what many owners appreciate about him.

Most boxers show a certain distrust of strangers. But he never behaves aggressively or conspicuously. He is much more likely to keep a watchful eye on what is happening and it takes a little time before he gains confidence.

With good and early socialization and growing up under normal conditions, the Boxer is very sociable and compatible with other dogs.

When dealing with other animals, the chances of a pleasant coexistence are high. Of course, the individual character and any previous experience play a decisive role here. If you get to know cats and birds from puppyhood, you don’t have to worry too much about the well-being of the other residents later on.

Boxers are athletic dogs. Posture, body tension, and motor skills tell the trained eye that the breed has a pronounced tendency to exercise. And here, too, the boxer scores with its versatility. He loves long walks, can walk well on his bike, and is a grateful customer for every ball. The boxer can also learn agility, the protection dog test, and obedience with ease.

Underemployment usually means that the dog does not submit to its fate, but instead makes up for it itself. This usually cannot be reconciled with the ideas of the owner. Boxer keepers find another occupation in tracking. Here, too, the animal can let off steam properly (mentally).

Future Boxer owners should be aware of his temperament. If you are looking for a couch dog and prefer short walks, the dog is under-challenged. 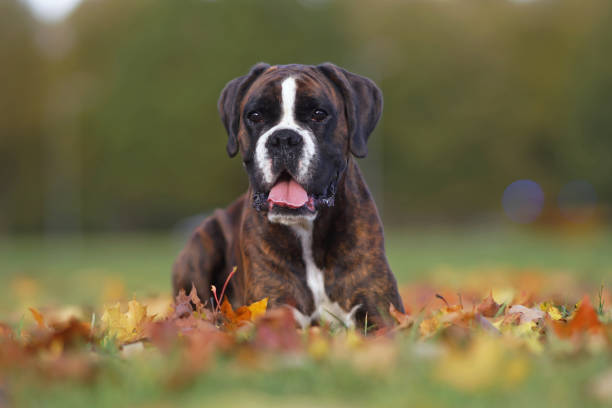 Holders know how to describe different types here. While some boxers remain rooted to the spot and watch the game intently, there are also those candidates who would like nothing more than to give in to their natural prey drive. Dog owners who offer their animal regular activity presumably find it somewhat easier to steer the dog’s behavior in the desired direction.

Look and Coat the Boxer

Boxers are medium-sized, smooth-coated dogs. His short and sometimes almost square physique is also a typical appearance. Connoisseurs can already see from their stature and posture that the boxer is one of the mastiff-like dogs.

The protruding lower jaw of the boxer is striking and characterized by a high recognition value. It is also said that the boxer passes. This underbite also stems from its past as a bull biter and earlier enabled it to grip its prey firmly while still being able to breathe.

In the past, the boxer was often docked on the tail and ears, fortunately, those times are long (sad) history. His mostly dark mask encompasses the equally dark but lively eyes.