The Soft Coated Wheaten Terrier is a member of FCI Group 3 Terriers. It originated in Ireland, where it is believed to be the oldest native terrier breed. Its name is derived from its soft-coated wheaten fur. The breed standard provides for optimal size of 46 to 50 cm for the males, the females are naturally somewhat smaller.

Its wheat-colored, lush, and soft coat makes the Irish Soft-Coated Wheaten Terrier an almost unmistakable representative of the terrier breeds. Descriptions of a dog similar to him in Ireland go back around two hundred years. The wavy or open curly hair may grow up to a length of almost thirteen centimeters. It is silky, without an undercoat and the Wheaten (the short form) does not shed – there is no change of coat between summer and winter.

However, the dead hair should be combed out daily from puppyhood, because instead of falling on the carpets, this is much more convenient for most housewives or househusbands. Unfortunately, the long coat brings a lot of dirt into the home and needs intensive care for both house and show dogs. Although the Irish standard for shows requires a natural coat condition, modern show dogs are trimmed more often. 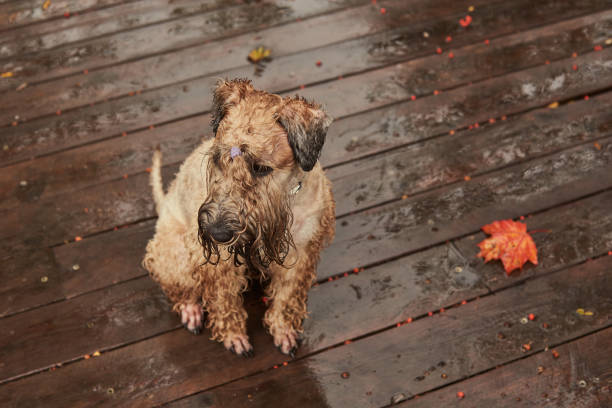 However, it is important to note that trimming is always done with scissors and never with a clipper. All shades of maturing wheat can be found in coat color: from pale yellow through beige to golden red. However, grooming has to be done regularly. On the one hand, all sorts of dirt accumulate in the hair coat, on the other hand, the hair quickly becomes matted if it is too careless. Daily combing and brushing, on the other hand, will keep it soft and lustrous.

It stays long over the eyes, under the jaw, and on the legs. The fur development is only complete at the age of about two years, before that the puppy and young dog go through different coloring. From red and gray hues to a color resembling the yellow grain, phases of different hues of the adolescent are possible.

The character of the Irish Soft Coated Wheaten Terrier also developed relatively late. He is cheerful and people-friendly from the start. The stubbornness of the terrier and the more or less pronounced stubbornness of the Wheaten always come through later.

Experience has shown that with consistent and constant educational measures, there will be no major problems. After all, the four-legged friend is very capable of learning and devoted to his people. He wants to please and be centered. A dog for the whole family that is not exclusively fixed on one person.

He is patient and good-natured with the children around him, they are welcome playmates. Terrier through and through, the Wheaten was historically used as a farm dog and hunting dog in counties in southern Ireland. Thanks to its defensive readiness, it also proves itself as a watchdog.

Its powerful and compact body weighs up to 20 kilograms and is up to 48 centimeters tall. As usual, the bitches stay a little under in size and weight. The farm dog takes on predators in the form of rats, mice, badgers, and otters. A certain share of the procurement of food is attributed to the terrier of that time – the poor inhabitants of the farms are grateful for some of the prey of their poaching four-legged friends.

Today, the Irishman is still ready to adequately defend his pack and himself. Despite this, he is less belligerent than other terriers and free from aggressiveness. The fearless and attractive Soft Coated Wheaten Terrier has now become a family pet.

Since in the past all terriers of Ireland were grouped under the term “Irish Terrier”, it is not easy today to determine which descriptions of the breed at that time are of a general nature and which relate specifically to these red dogs. 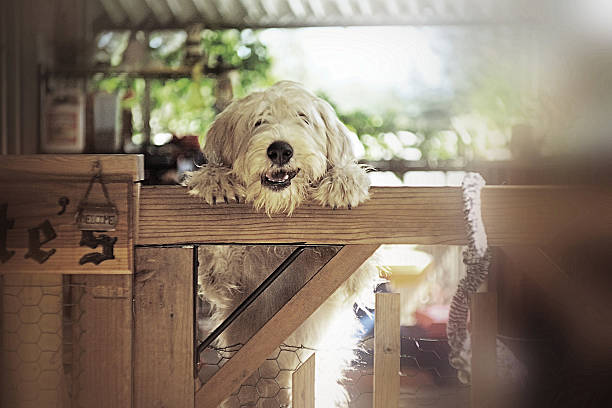 For example, lovers of the Soft Coated Wheaten Terrier are convinced that their breed predates the red “Daredevil” (Irish Terrier). However, it is considered certain that the Irish Terrier, the Kerry Blue Terrier, and the Black and Tan Terrier are among the closest relatives of the Soft Coated Wheaten Terrier. In Germany, the FCI standard with the number 40 is relatively uncommon, a first litter is documented in 1978.

So this dog was a cheap product that was universally owned and so common that few took any notice of it. However, there has been anecdotal evidence of open-coated wheaten-colored dogs with hard-biting jaws, particularly in the Kerry and Cork areas.

These dogs were specifically used to hunt otters and badgers. In addition to hunting these predators and rats and rabbits, on which he also primarily fed, he earned his living on the isolated farms of Ireland as a watchdog and drover.

This hard and natural selection resulted in a healthy and robust dog with a charming personality. Unable to attract wealthy nobles to care for and sustain the Soft Coated Wheaten Terrier, the number of these dogs declined dramatically in the 1930s.