La Pom is an incredibly beautiful dog, a cross between Lhasa Apso and Pomeranian. La Pom is small in size but large in spirit. It is a loyal companion with the courage of a Sheepdog and the looks of a soft toy. Cunning and largely independent, this pet will easily pick up the key to the master’s heart. Well-bred La Poms make wonderful watchmen, as well as no less sensitive friends of a person. 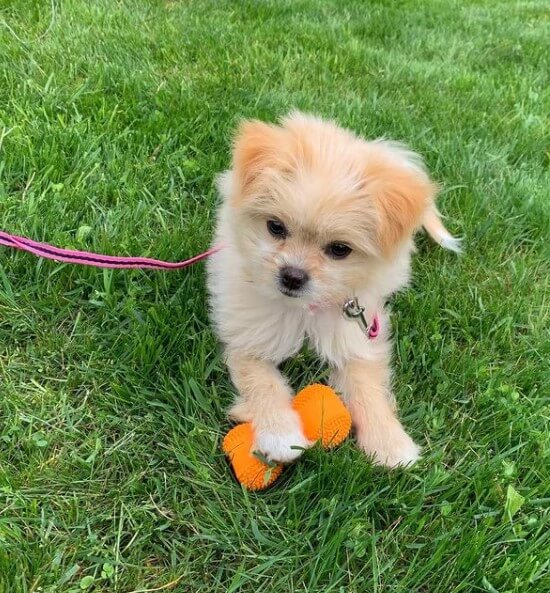 The La Pom Designer breed is a new breed of dog that does not have a detailed history, although the two breeds that together create the breed have a long history.

The birthplace of the breed is Tibet, or rather, its monasteries, whose inhabitants were not indifferent to small dogs, famous for their strong-willed character and sociability. It is known, for example, that the gates of Buddhist monasteries were always guarded by the Tibetan Mastiffs, while the status of the guardians of the Dalai Lamas’ apartments belonged entirely to Lhasa Apso. Local beliefs also helped to maintain the breed’s image. According to them, the souls of their dead owners moved into the bodies of animals, thus continuing their earthly path. In praising the breed, the Tibetans went so far as to rank its representatives as sacred animals, the sale of which was severely punished. Sometimes Lhasa Apso was still given, but similar offerings were made in exceptional cases and almost always not to Europeans. That is why dogs entered the Old World only by the end of the 19th century. The British were the first to get acquainted with Lhasa Apso, but at first various types of individuals were imported into the country, among which there were animals up to 50 cm in height. In England, they decided to divide shaggy dogs into breeds only in the 30s. After that, the larger dogs were called Tibetan Terriers, and the smaller ones, Lhasa Apso.

The history of the origin of the Pomeranian breed consists of numerous passages, but most of the origin and history of this breed can be traced in the archives of the royal families. Period 1700s – The Pomeranian is believed to have evolved from the dog-type wolf-spitz that migrated from northern Russia and Serbia to Pomerania, a region between eastern Germany and western Poland. The early ones, such as Pomeranian dogs, were used mainly for work – as guards, hunters, and as sled dogs, which were harnessed to sleds, and smaller Pomeranians were kept as pets, as loyal and devoted companions. At that time, the weight of the Spitz was 13-15 kg and there were such colors – black, white, and cream. After the 1700s, the breed migrated to Pomerania, where it was used as herding dogs. In 1761, Queen Charlotte, the wife of the German King George III, acquired two Pomeranians and took them with her to Great Britain, gave her pets the names Phoebe and Mercury, which won her heart and the queen fell madly in love with this breed. Queen Charlotte lived in west London, home of the famous artist Thomas Gainsborough. He took a great interest in this breed and painted several paintings of the royal dogs. 1888 – the first registration of a Pomeranian in the AKC. 1892 – The Pomeranian is exhibited in New York, 1900 – the official recognition of the Pomeranian breed in the AKC. Among the 143 breeds registered in the AKC, the Pomeranian entered the top 10 most popular breeds in the world. 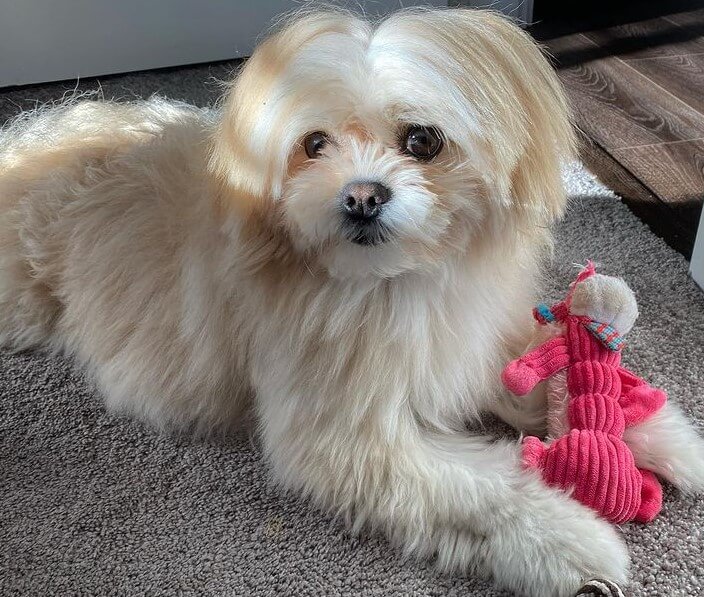 The La Pom is a small dog that can weigh between 7 and 15 pounds. Dogs of the hybrid will have a double coat; the undercoat will consist of short, soft hair while the outer coat has coarse, long hair. The La Pom will typically have a round head with a short muzzle, floppy ears, and eyes that are almond-shaped. The breed is commonly seen in the following colors: cream, red, white, golden, black, brown, and tan. 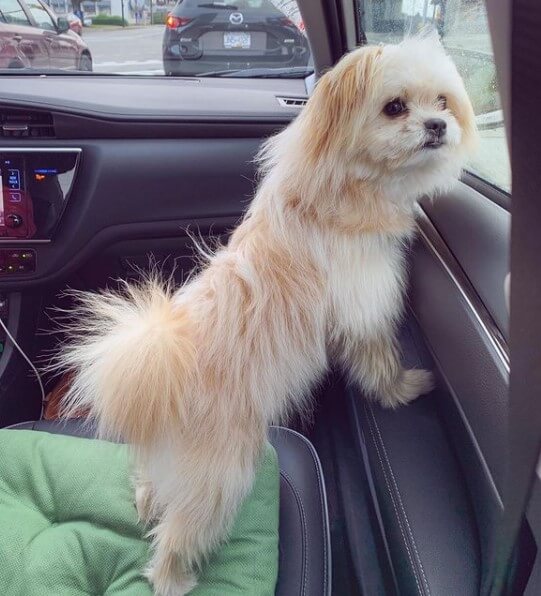 La Pom most often has a somewhat independent, but very friendly character towards its people. Despite its small size, the dog itself believes that it is not small at all. It seems to her that she is a big, important, and strong dog that can even protect her family. These animals have a very sociable nature, they like to share time with their family members, however, at the same time, sometimes they like to be alone. These dogs perceive strangers with caution, with distrust. Socialization and getting to know other people, your friends, as well as other dogs, are essential for the harmonious development of the personality. This will help your pet grow up more open and develop a softer temperament. Children are perceived normally, but they have certain limits of patience and are not nannies, therefore, the child must be taught how to handle a dog correctly. It is better not to leave small children under five years old alone with this breed. 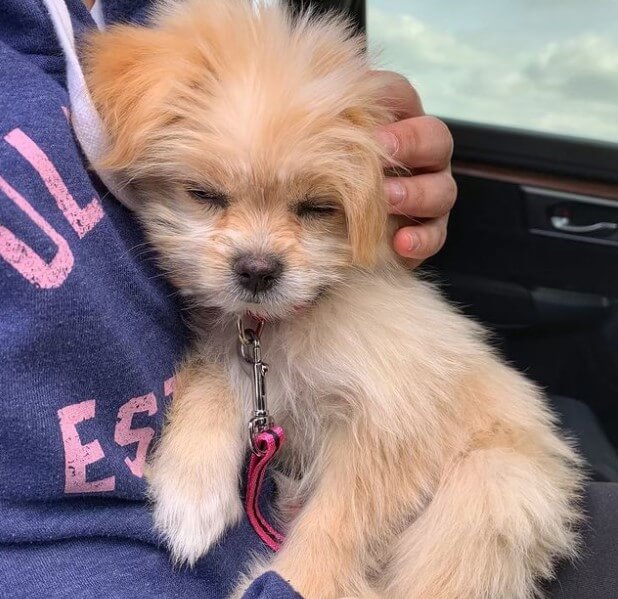 La Pom often has a medium to long coat, soft and thick, and often with a shorter undercoat under a straight and plush topcoat. It is recommended that you brush La Pom daily to prevent tangling from his hair. The animal is washed once a month and always using an air conditioner so that the coat will fit better. Be sure to wipe La Pom’s eyes and ears if you notice dust or sulfur discharge in them. A couple of times a week it is desirable to “persuade” your pet to brush your teeth. 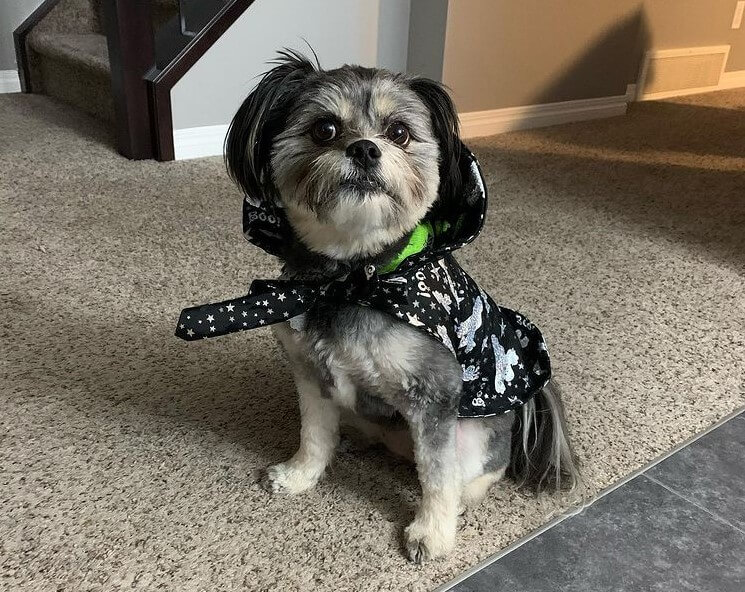 La Pom doesn’t have specific health issues to worry about, but there are a few hereditary issues to look out for. Hip dysplasia, tracheal collapse, and Legg-Calve-Perthes disease are the most serious problems. As this is a small breed dog, you must ensure that you maintain good oral hygiene standards. Regular brushing and dental treatment will keep plaque in check and prevent premature tooth loss, which often affects this breed. 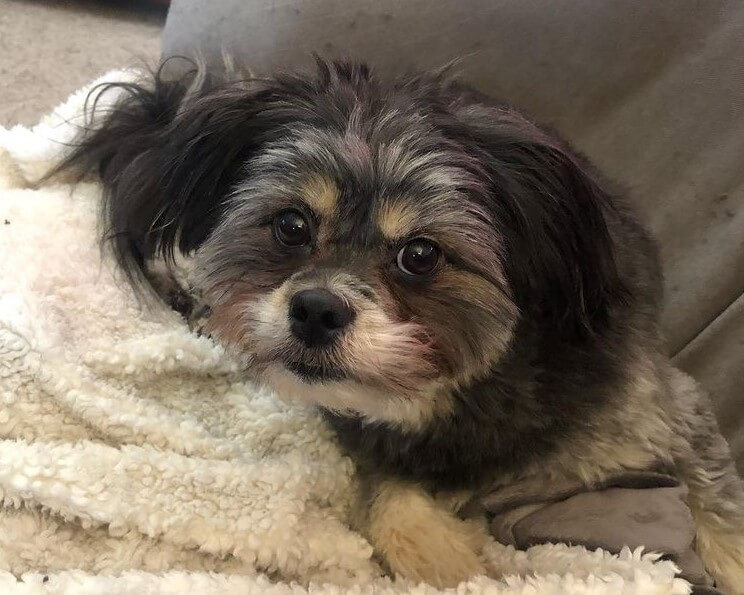 If you are looking for a loyal and devoted friend, then La Pom is better suited for this role than many purebred breeds. This is both a mischievous and affectionate pet that will replace a nanny and a toy for children. Early socialization and constant monitoring on the street are very important for a small pet. It is important to remember that the dog does not feel small and is able to rush into battle with its large relatives.