The Leonberger is a huge dog with a lion’s appearance and the lion’s courage. The breed has absorbed the strongest qualities: intelligence, poise, loyalty, ease of learning, contact. At the same time, Leonberger is completely devoid of craving for leadership and sees his main mission as serving the owner and family members.

Representatives of this breed are excellent guards and protectors, as well as wonderful companions. Moreover, Leonbergers love their owner very much and try to understand him perfectly, so dogs of this breed are easy to train. Experts believe that even a beginner can cope with a Leonberger.

Possessing a friendly character and a calm temperament, Leonbergers get along quite easily with other animals without trying to dominate. 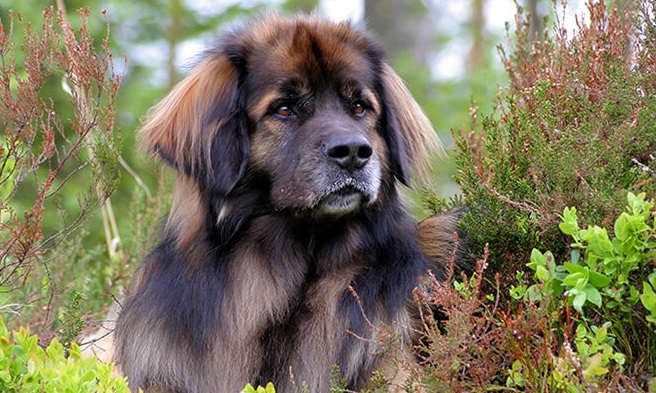 The history of the creation of the Leonberger breed is not only the history of the emergence of a new breed of dogs but also the history of the embodiment of a human dream. After all, its creator wanted the breed to symbolize a lion – an animal depicted on the coat of arms of the city of Leonberg (the land of Baden-Württemberg in southwestern Germany). Actually, as you probably already guessed, hence the name of the breed.

This idea came to the head of Heinrich Essig, councilor of the municipality of Leonberg, and, perhaps, it is not even necessary to say that he was a great patriot of Germany and deeply loved his hometown. However, he loved dogs no less. To create the breed, in 1839 Heinrich crossed a St. Bernard male (moreover, he chose the most purebred dog from the St. Bernard monastery), and a black and white female Newfoundland. Later, the Pyrenean Mountain Dog was also added to the breeding program.

As a result, in 1846, Heinrich announced the successful completion of the program to create the Leonberger breed. Without exaggeration, he turned out to be a very large dog with a long, mostly white, coat. The creator wanted to popularize his breed as much as possible, moreover, not only in the circle of high society but also among ordinary people. He wanted this dog to become truly popular, and symbolize the spirit of the area and city, meeting everywhere.

At first, the breed was appreciated by the nobles and the intelligentsia, and very quickly this “calf”, as it was sometimes jokingly called, entered many houses of the upper classes. Then the dog was evaluated by the farmers. By the end of the 19th century, in Baden-Württemberg, the Leonberger was found on almost every farm, moreover, not only as a terrifying watchdog but also as a draft animal.

The First and Second World Wars significantly reduced the population of these dogs, and indeed all dogs, in principle, in Europe, especially in Germany, because of which the breeders had to make a lot of efforts to restore the number of dogs. Although, it was not possible to completely preserve the purity of the breed. 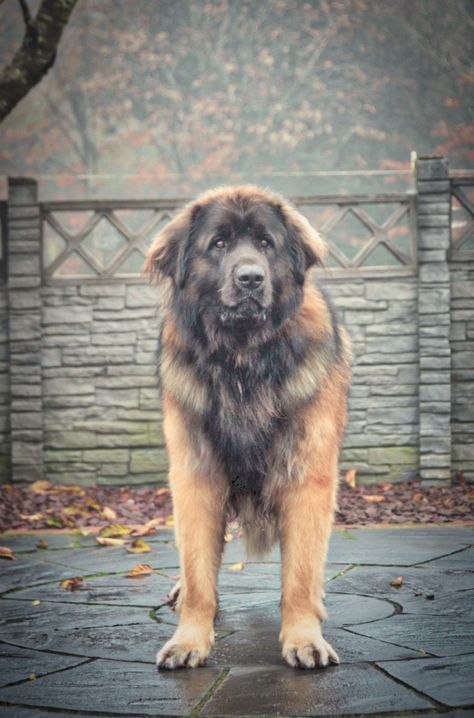 They are large dogs, with a powerful build and well-developed muscles. The limbs are slightly longer than the average, the chest is powerful, with a thick mane passing over the neck and head. Hanging ears, long hair, medium tail, saber-shaped, covered with wool. 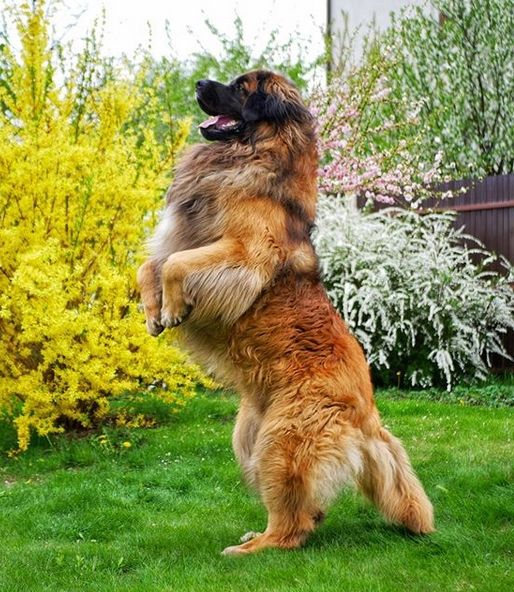 In describing the behavior and personal characteristics of the Leonberger breed, in relation to its family, we can say with confidence that this is a big and obedient kind-hearted man. Despite its gigantic size, the dog has an incredibly friendly and affectionate character towards members of its family, and with proper upbringing, it unquestioningly fulfills any commands and requirements. Of course, those that he can understand, and those that are in his power to fulfill.

And he has a lot – not to mention that a sane person with bad intentions simply will not climb into the territory he protects, the dog is used all over the world as a participant in search operations, a guide dog, and a rescuer. Friendliness towards the owners can instantly change to a powerful protective instinct when any danger appears.

The animal is aware of its size and power, and its balanced psyche and calm behavior should not be misleading. Despite the aforementioned good behavior and level-headed temperament, the dog can become destructive if it does not get enough exercise for its powerful body. In addition, do not forget about their intelligence, which also requires a load.

Given the size of this animal, destructive behavior is a sentence for your apartment or private house, and not only for furniture but also for doors, doorframes, walls, etc. In relation to other animals, the dog behaves calmly, and, in general, finds a common language not only with the dogs in the park during a walk but also with other representatives of the animal world. Including cats. Although, of course, it is best to introduce and make friends with cats at an early age, if you want the dog to live with the cat under the same roof.

Good for children, but you should not leave a child alone with this dog if the child is under five years old. In general, given the size of the pet, remember that it can accidentally overturn the baby, simply due to its weight. In fact, it is a wonderful companion that is very versatile and can be used in a wide variety of roles.

Of course, keeping such a dog in a city apartment will not be easy, since it requires a lot of space, and also leaves its fur everywhere. In addition, it can drool and gas, which can be attributed to the negative aspects, although the gas can be practically eliminated through diet.

By the way, don’t be fooled by the weight of the animal – it is quite agile, has a fairly high level of energy, needs constant walks, exercise, and training. Moreover, its essence requires physical development. He will easily go with you on any journey, even the most extreme, and will readily help you in any most difficult situation. 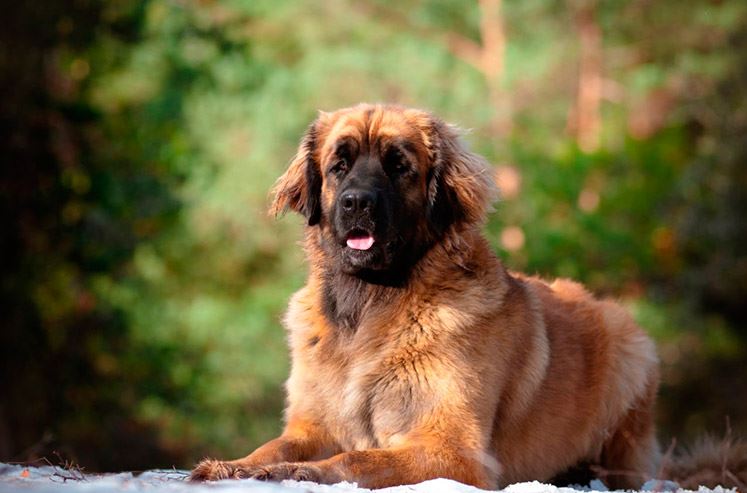 The Leonberger breed needs early socialization in order to make the character more stable, open, and harmonious in relations with others. In addition, the owner is required to be able to position himself as a leader, and not to feel fear of large dogs. As you can imagine, such a large animal needs a steady hand and proper guidance, and if a dog feels that you are afraid of it, at some point it may try to become the leader of its pack. If he sees that her master is not ready for leadership.

You need to work with the animal consistently, without interruption, preferably every day, starting at the age of six months. During the training process, it is extremely important to maintain a positive attitude, the dog should feel working in close contact with the owner, it is also extremely important to use a lot of rewards, delight the dog with tasty treats and try to bring variety. Games and exercise will help with this, in addition to repeating commands. 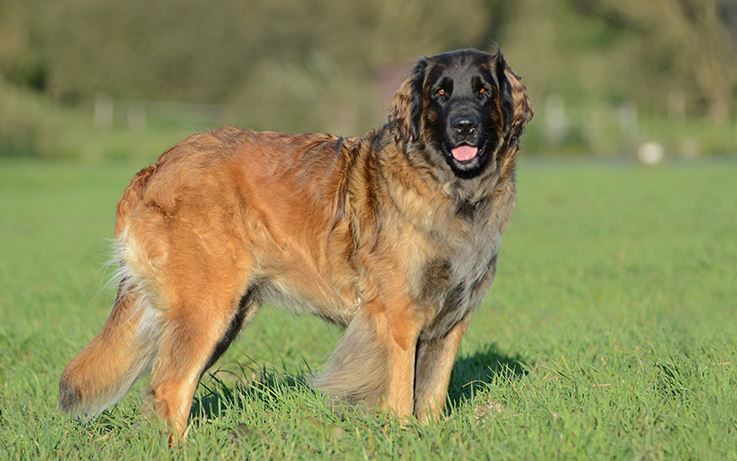 The Leonberger breed needs to be combed out 2-3 times a week, moreover, accept that there will always be a lot of wool. Many people knit socks, mittens, and scarves from this wool. The eyes need to be cleaned daily, the ears 2-3 times a week, claws are trimmed about 3 times a month. It is advisable to bathe your dog at least once a week, or more often if he lives with you and does not spend most of his time outside. Remember that the Leonberger breed does not tolerate extreme heat very well, due to the abundance of wool, but it tolerates cold well. 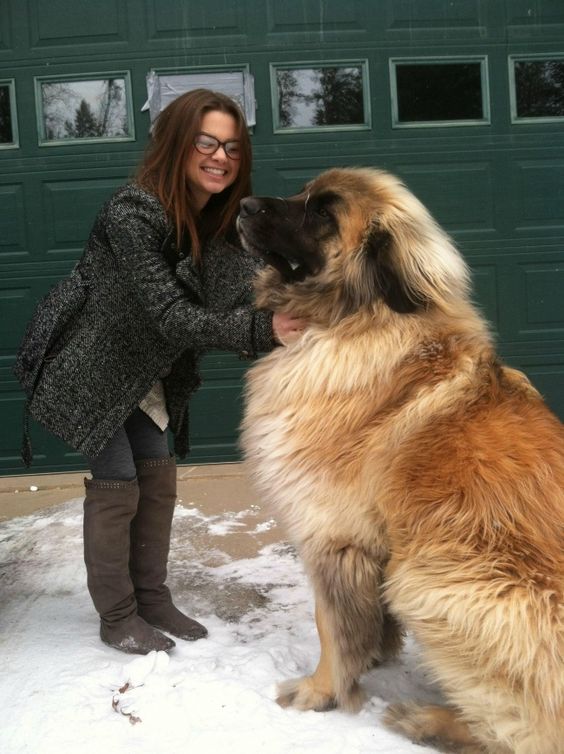 In general, a Leonberger dog rarely gets sick and practically does not have a tendency to any diseases. An exception is a hip dysplasia.