Mastiffs are a dog breed beloved by many people who prefer massive dogs. This breed of dog has a well-developed musculature, a wide chest and back, short hair, and a wide variety of colors. There are many types of Mastiffs, and some of them are popular with guard dog lovers. In this article, we will talk about the main types of Mastiffs: English, Brazilian, Neapolitan, Spanish, Tibetan, Bullmastiff, Japanese, and French. 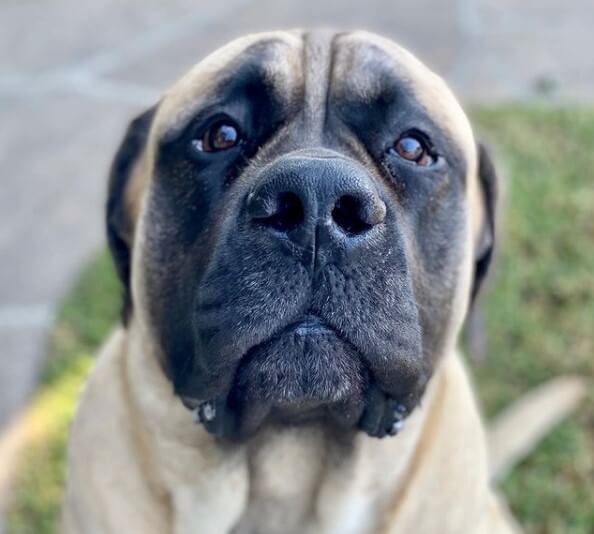 The Mastiff, the species of which is attributed to the coasts of “Foggy Albion”, still has some distinctive characteristics of the spirit of the British Isles. Reliability, confidence, patience, pride, and courage – all these qualities can be attributed to the character of our English representative of this breed.

Immunity to anger should not be considered laziness, as the English Mastiff can give out a flash of rage that will turn into a tragedy for the offender. The participation of such a dog in exhibitions may not bring pleasure to both the owner and the dog. Mastiffs of the English species do not like shows, and tolerate them, probably only for the sake of their master, to whom they are devoted. And loyalty in this type of dog is developed at a high level.

English Mastiffs are very good-natured dogs. Many owners of the English Mastiff declare that their pets will never harm other animals or people. That is why you do not need to close the dog in another room when guests come to you. The English Mastiff is pleased with the company of his family members and will proudly protect them.

The English dog looks quite harmonious and proportional. In purebred dog breeds, the head length is 34% of the height at the withers, and the body length is 12% longer than this length. The dog’s coat is not very hard, folds are pronounced on the muzzle. Experts believe that purebred English Mastiffs have certain standards for the shape of the head, according to which the very purebreds are determined. 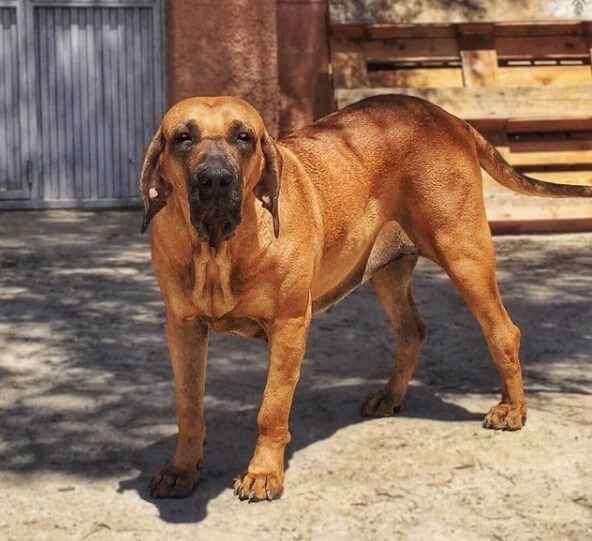 One of the varieties of Mastiffs is the Brazilian, or as it is also called – Fila Brasileiro. This breed of dog has incredible physical characteristics. She will be an excellent watchman for any security company. Fila Brasileiro is loyal and arrogant, showing pronounced aggression towards strangers. Loyal to the owner if he treats him with respect and obedience when performing various commands.

The Fila Brasileiro’s physique is very similar to the English version of this dog. The back and chest are all the same wide, with huge muscle mass. The ears are drooping, there are wrinkles on the face. The head is wide, the eyes are small, space on one line. The Brazilian phylum has a thick skin and a strong tail that widens at the base. The color of this dog has shades of yellow, brindle, ash, sometimes – dark nut color. The coat is short and dense; a black mask may be present on the muzzle. Fila Brasileiro is sometimes found with purely black color (white spots on the chest and legs may also be present). 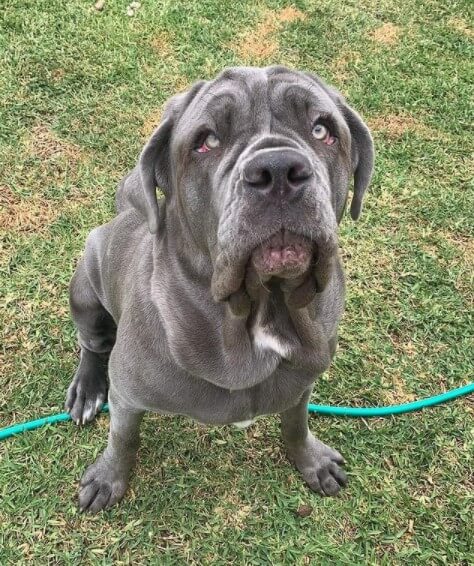 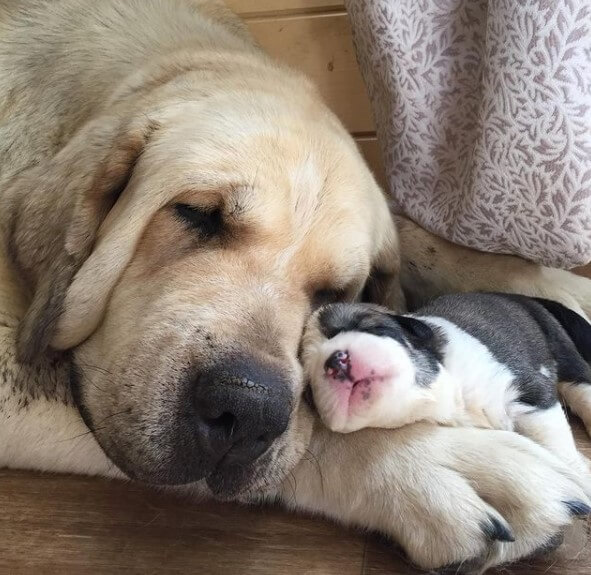 The mountainous regions of Extremadura are considered the birthplace of the Spanish Mastiff. It was here that these dogs were hunters and defenders of agricultural land 300 and more years ago. The Spanish Mastiffs were used as fighting dogs, they often alone could defeat a wild boar and even a bear. At the moment, the Spanish type of dog is used in security activities. In 1982, the breed standard was approved.

The Spanish Mastiff is one of the largest dogs in the world. With an impressive height (about 80 cm), it weighs up to 90 kg. Today, perhaps, among the herd of cows in Spain you will no longer find such dogs, as they are less and less used as guards for the herd. However, in large estates of aristocrats, Spanish Mastiffs can proudly walk along with the lawn, guarding the territory. 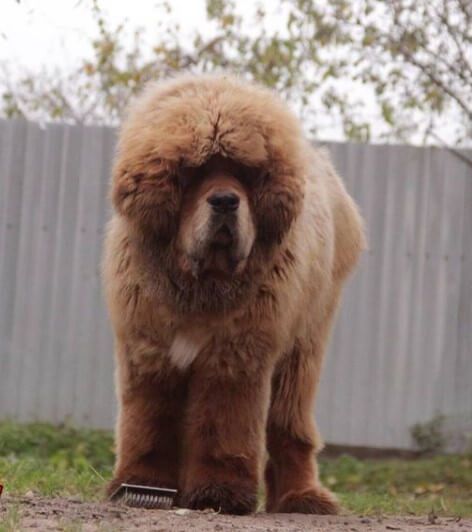 Tibetan Mastiff – has a predominantly black coat with red spots. Looks like a majestic huge lion or a proud furry bear. It is believed that the larger the dog, the more valuable it is. However, the breed standard for the “Tibetan” remains practically the same as for the other representatives described above.

The character of the Tibetan Mastiff is very persistent, but in the East, there are many legends that allegedly this beast crushed many opponents, and alone. This is probably why the dog is an excellent watchdog. Moreover, he will never attack a stranger who has no evil intentions. As the owners of Tibetan Mastiffs say, their dogs, on a subconscious level, can sense the bad intentions of a stranger. 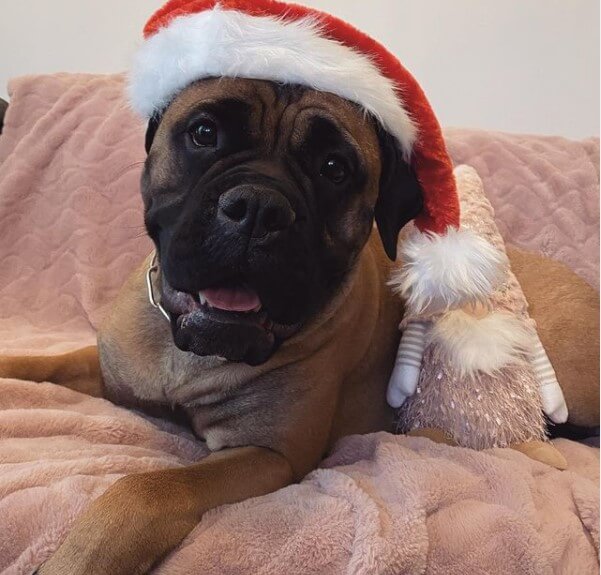 A wonderful pet. Small – 50-60 cm with a weight of 50-60 kg. Color – any, characterized by a black mask, black spots on the ears, and chest spots. Obtained as the fruit of mating Bulldog and Mastiff.

Bullmastiffs rarely show excessive activity, and they will not even bark without a particularly important reason. These dogs bark only when they or their territory is in danger. Moreover, in such cases, the Bullmastiffs bark very loudly. With other animals (especially with other breeds of dogs) these dogs do not get along well and can often attack them. However, it does not matter, there are special socialization courses, where dogs are made less aggressive towards the people and animals around them. 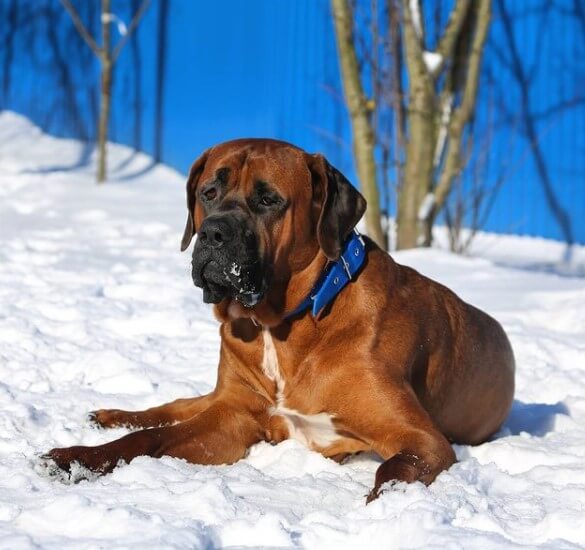 The Japanese Mastiff on the coasts of the Land of the Rising Sun is usually called Tosa Inu. It was here that this type of fighting dogs was bred by the selection method. Until the early 19th century, there were no decent fighting dogs in Japan. Any Japanese dog easily lost battles to Western dogs. Thus, American and European dog breeders hurt the honor of the samurai, and they began to look for ways to breed a completely new and ideal fighting dog.

A distinctive feature of these dogs is a small number of skin folds on the head and a narrowish skull. Representatives are fit and slender. Miniature in weight (from 30 to 60 kg). 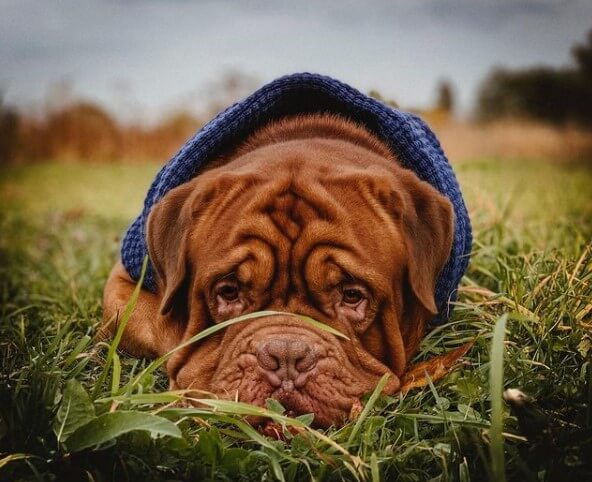 The French Mastiff or Dogue de Bordeaux is an ancient type of dog that has protected butcher and lumberjack huts from wild animals or robbers for a long time. The Dogue de Bordeaux is often compared to the Neapolitan Mastiff, and some even argue that the French version of the Mastiff originated precisely from the Neapolitan. Dogo de Bordeaux, as well as Spanish and Neapolitan, were often used to guard and hunt large wild animals. Today the dog, originally from France, is often used in dog fights, as it has large and strong muscles and good agility.

Outwardly, the French Mastiff resembles a Bulldog, however, the first is slightly larger. The breed standard is not much different from the Bullmastiff and other representatives of the Mastiff breed. The coat of the Dogue de Bordeaux is short and can be dyed in all shades of red. A purebred breed allows for a small white spot on the chest (spots on the neck or head indicate that the breed is not purebred).

Dogue de Bordeaux is a brave, serious, calm, and intelligent dog who is very loyal to its owner. He barks little, often doing so only in the most necessary situations. Since is a watchdog, he will immediately attack the strangers who come to his territory.