The Neapolitan Mastiff clearly shows its close relationship to the war dogs of the Romans. Nowadays, the wrinkled giants are also rare in Italy. Cane Corsos, which are directly descended from Mastinos, are more often used as guard dogs. In order to support the preservation and healthy breeding of the breed, you should find out more about the Mastino and the current difficulties in keeping and rearing it before you buy it.

Contents hide
1 Characteristics of the Neapolitan Mastiff
1.1 Breed standard
1.2 Fur and colors
2 The History of the Molossians – as Old as Modern Culture
2.1 The timeline
2.2 The essence: dangerous or comfortable?

Characteristics of the Neapolitan Mastiff

Molossians and their close relatives are impressive figures. The huge Neapolitan Mastiff is also intimidating just by its appearance. Although it is significantly more wrinkled and less agile than the battle and war Molossers of the Romans, it resembles the dogs from ancient depictions in many respects. Size and weight are impressive: Males measure between 65 and 75 cm at the withers, bitches are slightly smaller at 60 to 68 cm. The situation is similar when it comes to weight: males weigh an impressive 60 to 70 kg, and females are significantly lighter at 50 to 60 kg. 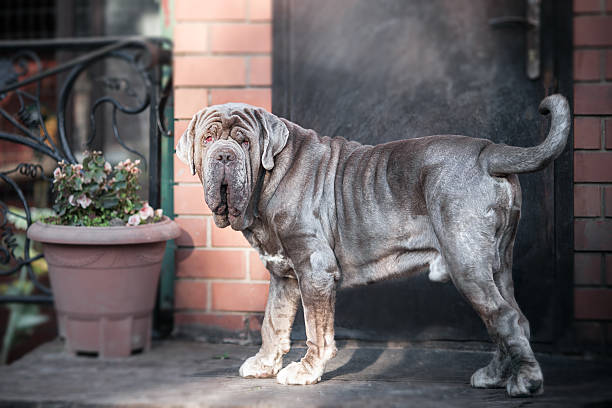 The breed comes in many different colors, but there are no spotting or tan markings. The solid color coat is short, smooth, and very dense, the hair should not grow longer than 1.5 cm. The following colors are allowed:

The History of the Molossians – as Old as Modern Culture 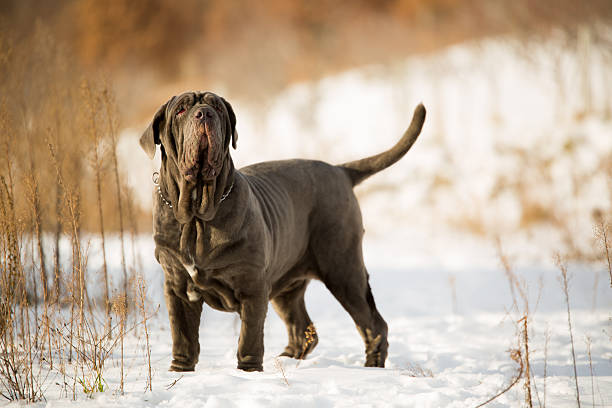 The origins of the Neapolitan Mastiffs are said to go back to the Romans, but the powerful war dogs were once imported into Rome as well. In Rome, monochromatic Molossians were used for bloody amusement in amphitheaters, where they hunted down (or were hunted down) large wild animals and gladiators. They were often used in show fights as they were easier to breed and keep than lions, bears, or wolves. During the war, they were also carried by enemy troops for psychological demoralization, and even during colonization times, they were still used effectively to intimidate indigenous tribes.

The essence: dangerous or comfortable?

If you ask Halter about her experiences with the Neo, one topic immediately comes up: the quiet companion really drools a lot. In the house, you can only counter it with a small towel, especially after drinking a lot of water splashes out of the hanging mouth. Hygienic sloppiness aside, the wrinkled-headed giant is a gentle fellow who bravely protects his family. It is not recommended for inexperienced owners due to its size alone – a four-legged friend that weighs as much as an adult human needs to be led by a confident and calm owner who can hold him back on a leash.