Neapolitan Mastiff – The almost majestic Molosser is dubbed the last descendant of the Roman war dogs and today enjoys a small but loyal following. His strong and reliable character and his big heart make him a real couch and family dog.

According to assumptions, the Neapolitan Mastiff is a direct descendant of the famous Roman war dogs. The Romans took their particularly large and strong dogs with them on their campaigns and later had them fight other animals and humans in arenas. In the absence of a studbook from that time, however, one cannot speak with certainty of a war dog breed.

It is much more likely that the Romans did not care about the bloodline at that time and that it was important to always have molossoid, heavy, and fighting dogs at their side. The Mastino has been bred for its unmistakable appearance over the last two to three centuries, and since 1947 the FCI Cynological Association has clearly regulated how a Mastino should look and behave. 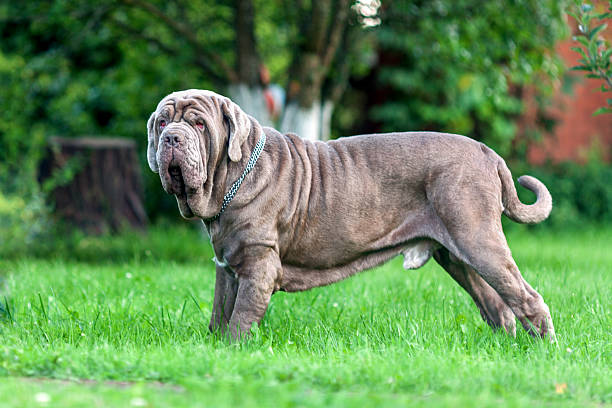 The Mastino is primarily a family dog.

According to the breed standard, the character of the Neapolitan Mastiff is a calm, steady being that is loyal and always friendly. In order for the Mastino to become like this, consistent dog training is part of it. Because in addition to the many positive characteristics and character traits, dissonances can develop in this strong animal if handled incorrectly. The result is aggression and an excessive protective instinct. Correcting the behavior of stubborn adult dogs can only be achieved with perseverance, patience, and a good trainer. His dealings with the family largely depend on the upbringing he received. He shows a pronounced dominant behavior towards other dogs. Unneutered males in particular should avoid encounters with him or try them carefully.

At this point it should be pointed out again: Not every dog ​​behaves as is written in the breed description. We’re talking/writing here about creatures that don’t particularly care about what’s in their breed description. The Neapolitan Mastiff can become a really, really great family dog, but experienced handling and maximum consistency (not to be confused with a hard hand) are required from day one.

If the dog accepts its lower hierarchy, you will get a large dog that brings many magical character traits with it. In the wrong hands, the good-natured-looking colossus (like other dogs) is a weapon.

He likes to exercise but in moderation. A light trot over short distances on the bike is just as possible as short jogging sessions. Many owners also report that the dog particularly likes to swim and that it has hidden talents. Owners should completely avoid rude biting and fighting games.

A pronounced guard and protective instinct are present, the hunting instinct is rather less pronounced.

The stride resembles that of a lion. The Italian, who at first glance appears sedentary, moves almost majestically as soft as velvet. The length of the body exceeds the height at the withers by 10%. His short, coarse hair is harsh and uniform in length and density throughout. It must not be frayed and should not exceed a length of approx. 1.5 cm. The casino comes in the colors: blue, lead-gray, and black, brown, fawn, and deer fawn. All colors may also be brindle or show brindle markings.

The Mastino is frugal when it comes to grooming. In his current form, he will not be an endurance athlete. Like many large dogs, he is unsuitable for city living for a variety of reasons and considerations. A large, fenced plot of land and two to three medium-sized walks are all they need. The coat should be brushed once a week. 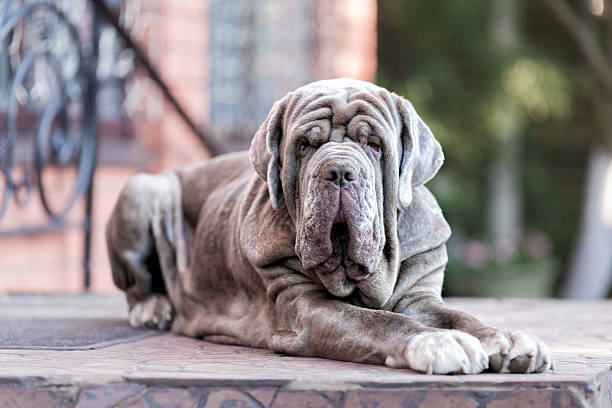 The folds themselves should be checked regularly for inflammation or infections. Regular checks are required, especially in the summer months.

The time that is not sacrificed for agility & Co. is invested in training Neapolitan Mastiffs. Education requires two essential things in the first place. A certain amount of experience handling Molossoid dogs as well as an extra dose of patience. The sooner the Mastino is introduced to basic commands and desired behaviors, the easier it will be for owners down the line. Consistency and constant practice are basic requirements for these animals. They must feel secure enough with their owners to take their place in the second or third row of the pack. If people do not succeed in working out this point of view for the dog during training, the dog will want to take control of the pack. If this happens, the path often leads him directly to one of the many overcrowded animal shelters, because the owners simply couldn’t cope with him. When purchasing, the special look should by no means only play a role – the upbringing of the Mastino largely determines whether you can be happy with your dog.