The Neapolitan Mastiff is a brutal and massive dog with a sad expression of a folded muzzle. Huge watchdogs that accompanied the army of Alexander the Great on campaigns have more than 2000 years of history of the formation of the breed. Not suitable for beginner breeders. 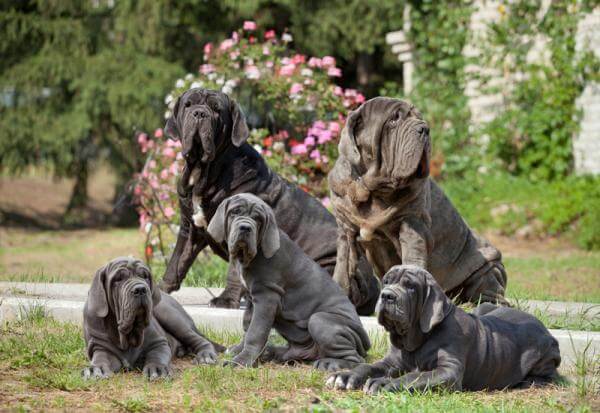 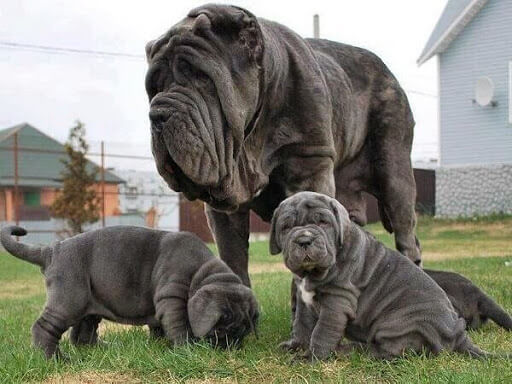 The Neapolitan Mastiff breed of dogs is one of the oldest. It refers to the time when people lived in the Bronze Age, that is, at least 3000 BC. Yes, you heard right – these dogs have such an ancient history that they may well surpass European civilization in this respect, even if we take ancient Greece as a starting point – the source of modern democracy.

Of course, the mastiffs who lived at that distant time, and the mastiffs of the late Middle Ages, although very similar to each other, are still not identical, since the breed has developed, improved, and modified over more than 50 (!) Centuries of its existence. However, it is traditionally accepted that the Neapolitan Mastiff has such an ancient history, and is a single whole with its ancestors.

The breed was widely used during the time of ancient Rome, even before our era, during the time of King Perseus of Macedon, and Lucius Aemilius Paul (consul of Rome). In fact, along with the Roman legions, these dogs traveled around the world, although Italy remains their homeland, where they lived and developed until today.

Both in pre-Christian times and in the Middle Ages, mastiffs served as guards and were also used in combat clashes as an auxiliary combat unit. Large size, enormous power, strength, courage, and an unusually loyal character made these dogs wonderful warriors and protectors.

About how exactly the breed was formed and developed during 2000 years after the birth of Christ, almost nothing is known, and it is quite possible that the Neapolitan Mastiff would have remained a local dog, about which the rest of the world knows practically nothing, if not for the Italian journalist named Pierre Scanziani. He once visited a dog show in Naples in 1946, where several individuals were present and were so inspired by the breed and its history that he wrote an article about it.

Later, he began to popularize the breed and even took part in writing the first standard in 1949. It is believed that this man played a huge role in the official formation of the Neapolitan Mastiff breed throughout the world. One of the Scanziani dogs, Guaglione, became the first of the breed to become the champion of Italy.

In 1949, the breed was recognized by the international dog register, the Cynological Federation International (FCI). By the early 1970s, the Neapolitan Mastiff had become popular in Europe as well. The first specimen known to the United States was brought in by Jane Pampalone in 1973, although Italians may have brought mastiffs with them as early as the 1880s, during the first wave of Italian emigration. 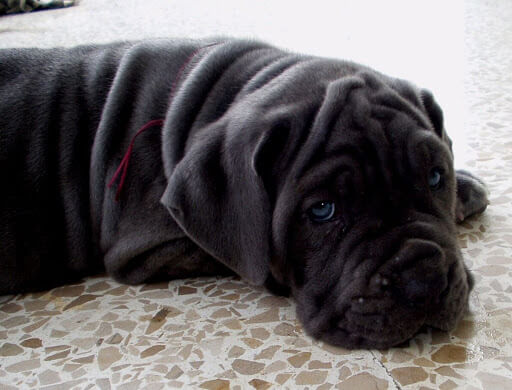 The Neapolitan Mastiff belongs to the group of Molossian mastiff dogs. The body is of an extended format, massive, powerful, with a loaded neck with a double chin, deep and voluminous, very powerful chest, sufficiently prominent ribs, wide withers and back and slightly sloping powerful, wide croup.

The head is short, massive, with a pronounced transition from the forehead to a short muzzle with powerful jaws, a large nose, and drooping, fleshy, thick lips. The skull is flat and wide. The eyes are dark and round.

Ears set high, drooping along the cheeks, flat, triangular, small, predominantly cropped to the shape of an equilateral triangle.

The tail is thick at the base, slightly tapering and tapering towards the end. Hangs down to the hock, docked 1/3 of the length. The limbs are massive, muscular, with large, rounded paws with arched, tightly clenched toes.

The coat is short, hard, dense, smooth, and dense.

The color is black, gray, lead-gray with black, brown (to red), red, fawn, sometimes with small white spots on the chest and legs. Brindle is possible (against the background of any of the above colors). 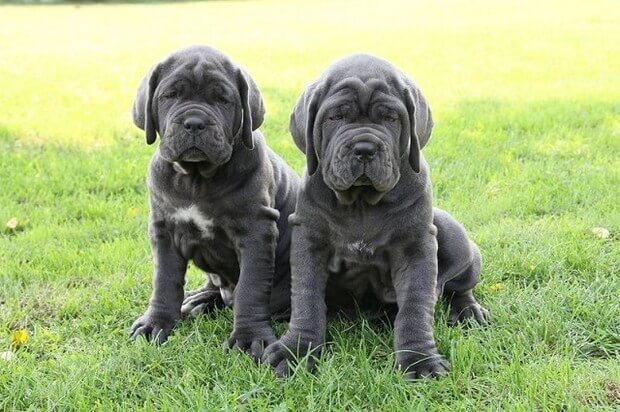 These large and powerful dogs have a calm and even temperament. They are alien to sudden mood swings, impulsivity, and excessive emotionality, although they are very affectionate with their family, show great love and devotion. On the other hand, despite the above qualities, firmness of character, and awareness of their own strength and power, sometimes they make the dog too independent, especially if the owner has a soft and indecisive character. After all, such a pet needs a firm and confident hand.

The Neapolitan Mastiff is a breed that is perfect for guarding your property, be it an apartment or a private house. On the one hand, they do not like to bark very much, and they do it somewhat restrainedly, on the other hand, the dog will never let intruders into its territory. It’s impossible. Even if you have to give your own life. If the owner has gone on business, and there is no one at home, no one will get to the protected territory of the casino, and few will try to do it, given the terrifying power of this dog.

However, the Neapolitan Mastiff does not have a huge level of aggression and rage, unlike, for example, the Caucasian Shepherd Dog. The breed can be kept both in an apartment and in a private house, however, given the size and some features of the behavior of these dogs, a private house with its own yard is much preferable.

First, they drool profusely, which is not very convenient in the apartment, since the dog will have to be cleaned all the time. Secondly, the Neapolitan Mastiff is prone to emitting gases, and no matter how indecent it may sound, but it is, and you should take this feature into account if you live in an apartment. Especially if the apartment is one-room and there will be nowhere to hide from the “gas attack”.

In addition, the dog is large, clumsy, and if the apartment is small, then all beating objects within reach will be beating. Other dogs, as well as strangers, are perceived neutrally, as long as they do not show negativity. However, sometimes there may be some aggression towards other dogs, but not too much.

The Neapolitan Mastiff treats children well, but given their awkwardness and size, it is better not to leave small children alone. These dogs are intelligent and observant, even if at first glance they do not seem so. Mastino can doze in the shade in the yard, but at the same time know everything that is happening around him, and his slowness will instantly disappear as soon as he senses the real danger to loved ones. 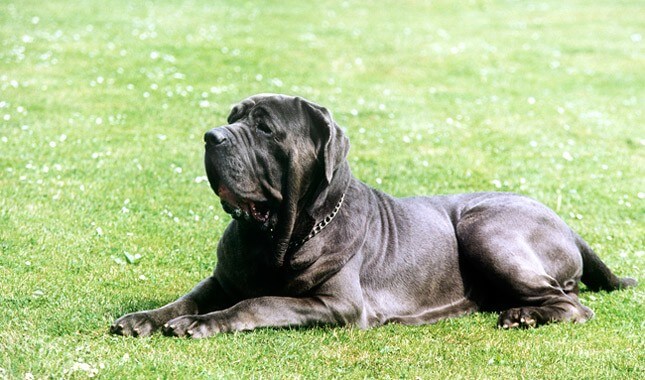 The Neapolitan Mastiff breed lends itself well to training and education, although sometimes this requires additional time since it does not always quickly learn commands. Although, this is not absolute. The owner must be firm and preferably experienced in large breed dogs. After all, if you feel fear and indecision towards your pet, he will try to dominate the circle of his family, since in his dog’s brain the family is still a pack. Or something like that.

It is important that classes are held on schedule, without interruption, consistently, and persistently. You need to maintain an even frame of mind, have a good sense of humor, a positive attitude, pockets full of goodies, and patience. It is imperative to learn the basic commands and to achieve complete obedience on the part of the dog so that it can carry out the command regardless of any sounds or smells surrounding it. In addition, emphasis can be placed on training the qualities of a protector and guardian-guard, since the dog is initially predisposed to perform such functions. 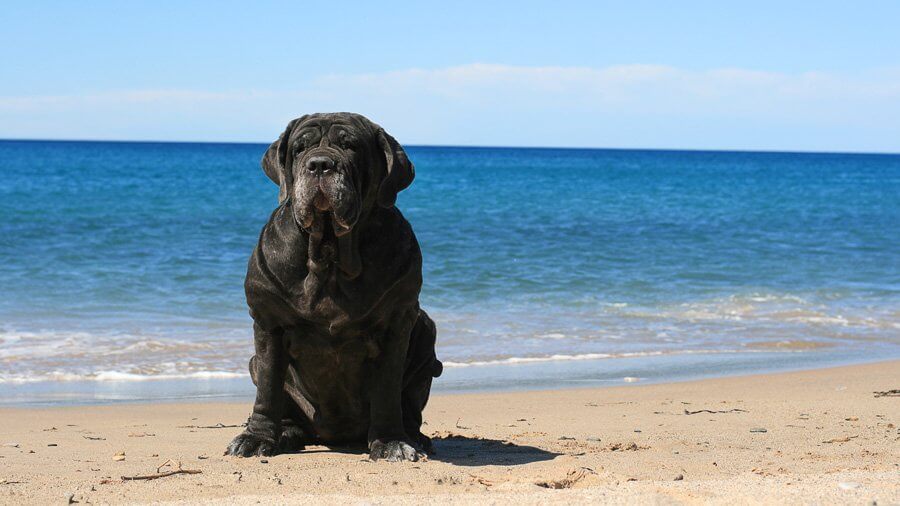 The Neapolitan Mastiff needs a weekly brushing of its fur, and it is also required to bathe the animal at least once a week. The shampoo should be selected in such a way that the folds of the skin do not dry out. In fact, this is a separate headache, as they are agents of various diseases and must be kept clean by rubbing them throughout the day.

Drooling is another “nice bonus” you need to deal with. The eyes need to be cleaned daily, and be aware that loose skin is around the dust. The ears are cleaned several times a week, the nails are trimmed 3 times a month.

It is recommended to feed adult mastiffs with professional dry food, in which the required balance of nutrients is observed, which ensures the dog’s good health and vigor.

Natural products are also acceptable, but for such large breeds, only a veterinarian can choose the right diet. The dog constantly needs a lot of water to drink.

Since this is a large dog, a full, high-quality, but at the same time, fairly moderate nutrition is required. At the same time, the feeding of puppies and adult dogs has significant differences.

In the first year of life, a young animal needs vitamins (especially group B) and minerals to be added to the feed, which strengthens the immune and nervous systems and contributes to the correct development of joints, which is very important for such large breeds.

For proper formation, the puppy must consume a sufficient amount of protein, which is at least half of the total daily diet. Up to three months of age, a puppy needs four meals a day. As it grows, it is reduced to two times. 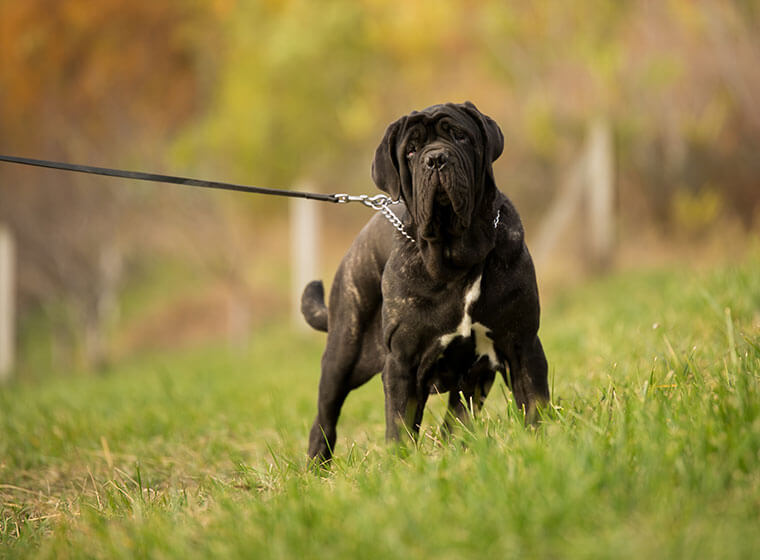 These powerful and strong dogs have good immunity but are prone to certain diseases. Among them: 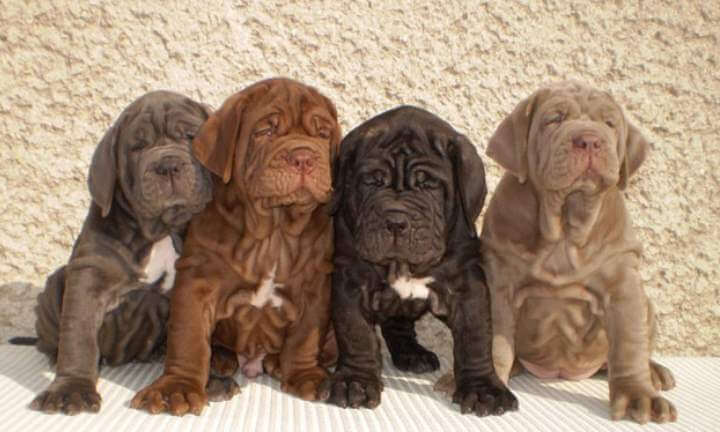 The Neapolitan Mastiff is a serious dog. Therefore, in order to avoid all sorts of risks, it should be purchased only in a specialized nursery. In order not to end up with an uncontrollable predator, a pedigree for this breed is required.

A healthy young mastiff is different:

If some indicator has significant deviations from the norm, it is better to refuse to purchase. It is also necessary to find out what vaccinations he received, and it is best to leave the selected animal in the nursery until the end of quarantine. It is advisable to see the parents of your future guard.

In addition to the above, buying a puppy in a reliable kennel will provide you with a full set of necessary documents, including a puppy card and a veterinary passport. In the future, you will be able to contact the nursery specialists for consultations with all arising problems and questions.