Nova Scotia Duck Tolling Retrievers are little whirlwinds who have been trained to be playful since they were born. The hunting dogs from Nova Scotia in Canada are also called decoy retrievers in their English-speaking homeland because they attract curious ducks with friendly play and retrieve them after the shot. Here you can find out why the dog could be the right companion for active families:

The Nova Scotia Duck Tolling Retriever is quite small for a retriever, but with an optimal height at the withers of 48 to 51 cm for males and 45 to 48 cm for females, it is not a small dog. The fox-like dogs have a medium-length, soft coat and share some traits with retrievers, while others are more reminiscent of collies. Depending on their size and weight, males weigh around 20 to 23 kilograms, while females usually weigh just under 20 kilograms.

The Decoy Retriever from head to tail 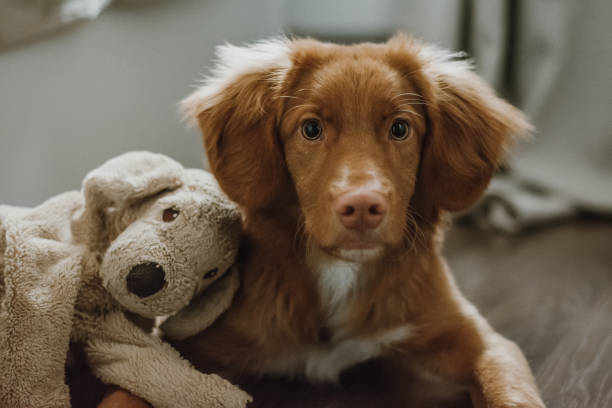 Coat and colors of the Nova Scotia Duck Tolling Retriever

The coat of the Nova Scotia Duck Tolling Retriever was created for bird hunting in icy waters and is very insulating. Both the long topcoat and the fluffy undercoat feel soft and fluffy. The hair on the head is shorter than on the body, feathering appears on the ears, neck, and legs. With a few (wavy) exceptions, the fur is almost smooth.

Where Does the Nova Scotia Duck Tolling Retriever Come From? The Canadians’ Decoy Dog

When hunting, the Nova Scotia Duck Tolling Retriever uses fox-like methods to attract and irritate. Unlike other retrievers, he doesn’t sit still next to the hunter but rather arouses the curiosity of unsuspecting ducks with playful movements and surprising appearances and disappearances in the tall grass. The animals come closer and the hunter shoots – fearlessly the red retriever rushes out and brings the bird to the hunter. Apart from the Dutch Kooikerhondje, no other hunting dog uses this technique.

The first clubs around the Little River Duck Dog, or Yarmouth Toller as the retriever was formerly known, formed in Canada and the United States in the 1940s. As its early name suggests, the dog is attributed to the Yarmouth region of Nova Scotia. They have only been known in Europe since the 1980s and are sought after as family dogs. Which breeds in Nova Scotia (Nova Scotia, Canada) contributed to the origin of the breed is not exactly documented.

Possible ancestors of the toller 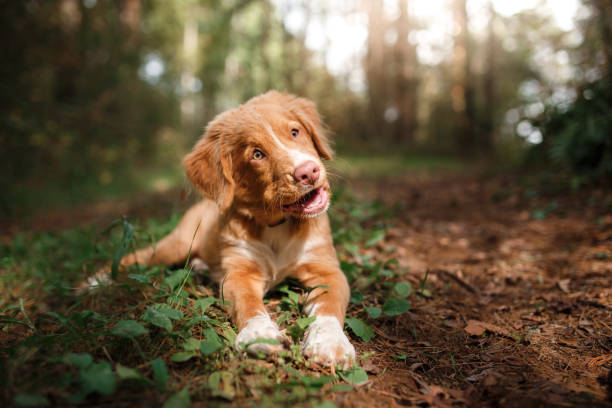 By nature, the Toller is active, friendly, and obedient. You should not underestimate his endless amount of energy – the dog wants to do meaningful work every day and play, play, play… He doesn’t let any weather disturb him and mud, small rivers, and duck ponds also magically attract him. Can you handle such a stormy temper? Then you will find an irreplaceable friend and companion in the Nova Scotia Duck Tolling Retriever.

Who is the Red Retriever the right dog for?

For a Nova Scotia Duck Tolling Retriever, you need a lot of patience, perseverance, and a desire to play. As a family dog, it follows the “leader of the pack”, but also builds close friendships with other family members and friends. This includes animal companions, although some dogs may also have a distinct hunting instinct. As the owner of the breed, you should enjoy spending time outdoors and plan plenty of time for sporting activities with your dog. Couch potatoes are quickly overwhelmed by the playful tollers.