The Old English Bulldog (sometimes called the Old British Bulldog) is a powerhouse dog breed. With his friendly and people-oriented character, he is a great companion in all situations. Sometimes these dogs seem a bit clumsy and often underestimate their strength. If you are looking for a dog that will challenge you, an Old English Bulldog is the perfect breed for you.

History of the Old English Bulldog

Bulldogs were already known in the Middle Ages. At that time, the burly animals competed against bulls, among other things. With their short snout and massive physique, they could bite into the bull’s body. Later they also had to fight other dogs. In Britain, these bloody animal fights were banned in 1835 and the dog breed lost its purpose. The English bulldogs almost completely disappeared. Few breeders still focused on the fighting dog with the lovable core.

An Old English Bulldog is quite literally a source of positive energy. With her friendly, open nature, she quickly takes strangers to her heart. Out of sheer joy, this breed is usually quite impetuous. The lively power pack likes to test the fitness of its owners and the radius of the leash. Playing is also very physical. The behavior often seems rather rowdy towards other dogs, because they like to show their joy to other dogs a little too enthusiastically. There can be arguments with other male dogs when it comes to defending one’s own territory.

Purchase of an Old English Bulldog

If you decide to buy an Old English Bulldog, there are a few things to keep in mind. Due to their physical strength and high level of intelligence, the dogs not only need physical exercise, but also mental exercise. If they are not offered this, boredom and thus undesirable behavioral problems can quickly develop in this breed of dog. Old English Bulldogs cut a very good figure in dog sports, for example in obedience training or agility, and have a lot of fun doing it. The short coat is particularly easy to care for, but they freeze quickly in winter and need a coat when the temperature is low.

Is the Old English Bulldog right for me?

If you choose an Old English Bulldog, you’re getting a powerhouse where kindness meets willfulness. The lively, happy dogs like to do things with their people, and are often stubborn, but not rebels. You have your own ideas and try to implement them with passion and creativity. One of the other educational attempts is also gladly ignored. So if you want a dog with a big will to please, the Old English Bulldog is not the dog for you. 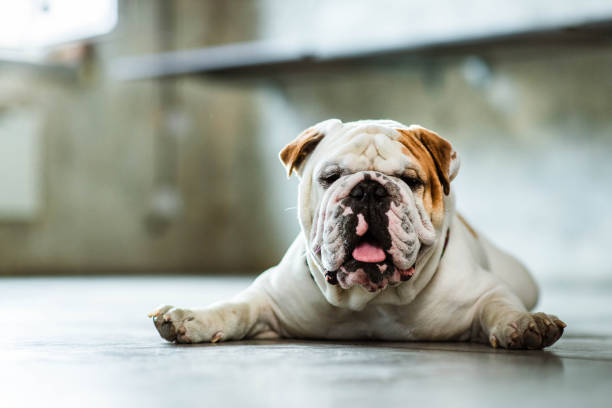 She is very goal-oriented and has her own mind. But that doesn’t mean that these dogs constantly rebel. They also love to work with their human. What is important for the Old English Bulldog is education and clear and consistent, but still loving leadership.

What do you have to pay attention to when buying?

Old English Bulldogs are one of the less common dog breeds. In Germany, there are only around 20 breeders who work according to the breeding regulations of clubs. If you decide to get an Old English Bulldog puppy, you should definitely take the time to find a reputable breeder. The puppies of this breed usually cost between 1,500 and 2,000 euros. In the case of cheaper offers, you should inform yourself well about the breeder. This is where clubs like the Old English Bulldogges Club can help. Many of these dogs are also looking for a new home in animal welfare.