The Shar-Pei not only stands out visually from other breeds due to its many wrinkles but also stands out due to its tidy character image. Where other dogs play ecstatically or are enthusiastic about sports, the Shar-Pei is unimpressed, even-tempered, and calm. This makes it suitable for a large number of individuals or small families. But how do I care for the wrinkles and what other special features are there? The following article explains the breed portrait of the Shar-Pei.

Contents hide
1 History of the Shar-Pei
2 Essence and Character
3 Acquiring a Shar-Pei
3.1 What do I need to pay attention to when purchasing?
3.2 Puppy development and education

History of the Shar-Pei

The Shar-Pei is an ancient Chinese breed of dog. Its origins are dated back to pre-Christian times. However, it is not known with absolute certainty when or where the first Shar-Pei existed, nor to which dog breeds it can be genetically traced back. It is likely that the Chow-Chow, the Neapolitan Mastiff, and the Staffordshire Bull Terrier all flowed into the Shar-Pei, but the only clear point is that it belongs to the Nordic/Asian molossoid breeds (large and muscular dogs).

Back then, the Shar-Pei lived on the farm and kept the area mouse-free. He also watched over the lands and the cattle. However, interest in the Shar-Pei waned noticeably. Stocks had bottomed out in the mid-20th century. Only as part of global breeding programs were they able to gradually stabilize again, but the Shar-Pei is still a real rarity today. 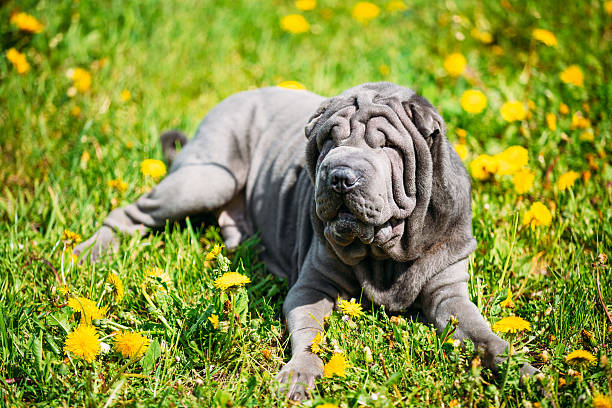 The Shar-Pei is a human-related animal. He meets his owner with calm and peacefulness. If he gains trust, he forms a strong team with his human being. The Shar-Pei does not like to be alone but prefers to be part of a fixed family circle. Although he is not very enthusiastic about games, he gets along well with children, as he does not let them irritate or upset him. However, he prefers families that suit his disposition, in which there is no constant rush. When he feels a part of his family, he stands up for them and – like his ancestors – acts as a courageous protector. In contrast to this, he tends to be reserved towards strangers in everyday situations and builds up trust in them in small steps.

When it comes to contact with conspecifics, the Shar-Pei reveals a completely different character side and shows itself to be dominant. So that dog encounters do not become a problem, it is advisable to socialize your dog as early as possible. Otherwise, the Shar-Pei is a stubborn contemporary. He only reveals parts of his personality, he keeps the rest under lock and key – even to his owner. In terms of character, the attributes closed and idiosyncratic particularly apply to him.

The Shar-Pei is a rare animal, which is why you as a potential Shar-Pei owner have to calculate a certain effort (waiting time, distance, and purchase price). They are pedigree animals and therefore cost a handsome price. You have to pay up to 2,000 euros for a purebred dog. In general, there is hardly any way to get a cheap Shar-Pei that does not come from illegal torture breeding, because they are also an absolute rarity in animal welfare and Shar-Pei mixed-breed dogs usually do not exist. 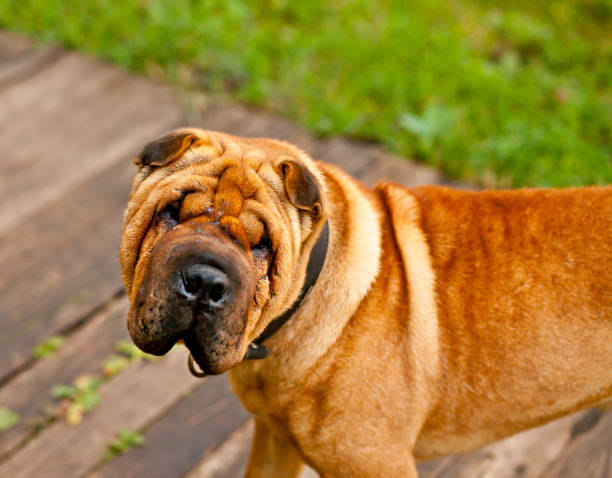 The Shar-Pei is a dog whose many wrinkles are particularly characteristic. However, healthy dogs primarily have these wrinkles on their backs and heads. Dogs whose wrinkles are purposefully bred often suffer from skin problems and are restricted in their freedom of movement. The dog should therefore not be genetically designed for extreme wrinkling. However, Shar Peis always look wrinkled when they are puppies. You should therefore base your purchase decision on the body image of the breeding animals.

You can find healthy animals mainly through certified breeders within the VDH (Association for German Dogs). Breeders of this species are strictly controlled and comply with medical requirements and breeding standards. This reduces the risk of inbreeding and the spread of hereditary diseases. It is also important that you can visit the mother and her puppies and find a pup that suits you well in character.

The education of the Shar-Pei is essentially the same as that of other dogs. The sooner socialization begins, the better he will get along with his fellow dogs later on, and the sooner he learns the local rules, the faster he will make friends with them. What is important is the right balance between love, patience and consistency, and a certain continuity. In addition, Shar Peis tend to be slow-moving and sensitive. Adapt the training speed to the temperament of this breed and the individual character of your dog so that it does not react to the exercise content with frustration and excessive demands.