The hybrid dog breed Pomsky is said to combine the advantages of Pomeranian and Husky. An attractive appearance and an interesting character ensure that the young dog breed from the USA inspires many dog ​​lovers. Often referred to as the “king of dwarf dogs” / “king of toys”, the small, lively designer dogs are always a surprise package. So there are a few facts you should know about the breed before committing to a Pomsky.

Contents hide
1 History of the Pomsky
2 Essence and Character
3 Acquisition of a Pomsky
4 What Do I Need to Pay Attention to When Purchasing?
5 Puppy Development and Training

History of the Pomsky

The Pomeranian Husky Mix Pomsky is a purposeful cross between the Siberian Husky and the Pomeranian (Spitz). Both breeds belong to FCI group 5. The Pomsky, on the other hand, is not one of the recognized breeds, because hybrid breeding is based on crossing a Husky bitch with a Pomeranian. Breeding among Pomskys is not yet common, which is a must for recognition as an independent breed. It can only be considered a purebred animal if the parents are of the same breed. Currently, Pomsky puppies are mostly first-generation animals (F1). However, animals of the second generation (F2) are already being offered in isolated cases.

In Europe, the number of Pomsky breeders is currently negligible. In the USA, however, hybrids are already very popular and the number of breeders is increasing accordingly. Pomsky puppies win hearts quickly because they look like mini husky, and this look is retained when the Pomsky is fully grown. 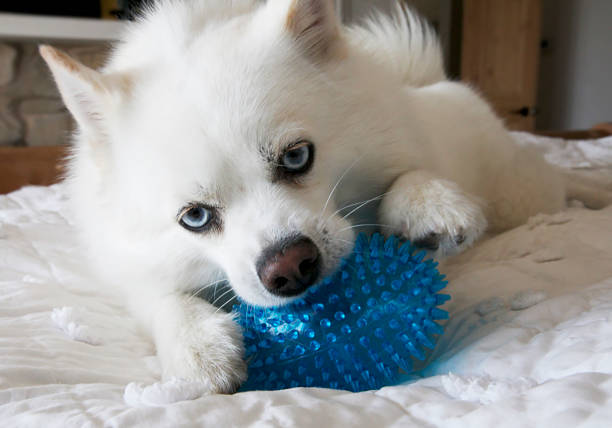 For many dog ​​lovers, the Pomsky character is appealing. While the husky as a sled dog hardly ever form a close bond with reference persons, the Pomeranian presents itself as human-related and affectionate. Of course, breeders want to keep the look of the husky and the characteristics of the adaptable and friendly Spitz.

Pomsky Owners often describe their furry friends as friendly, active, and playful. In addition, the hybrid dogs show a certain vigilance. The intelligent animals are definitely strong-willed, but also stubborn and need a loving but consistent upbringing. Depending on the selection of the parent animals, the nature and character traits of the individual dogs of the breed can vary significantly and you should be aware that a Pomsky, even in its current form, is always a small, lively surprise package.

Acquisition of a Pomsky

If you are toying with the idea of ​​purchasing a Pomsky, then you must be aware that you may have to put up with longer distances, as the number of breeders in Europe is still negligible. In addition, you should not underestimate hybrid dogs, because small to medium-sized dogs bring a lot of energy and have their own mind. The active fur noses not only need a good upbringing, but also a good amount of attention in everyday life.

A Pomsky is by no means a dog that you can let run alongside, but much more it requires your attention and affection and also demands it. The mixed dogs know how to get their way in an intelligent way. You should only consider purchasing a Pomsky dog ​​if you have already gained experience as a dog owner because the dog breed is tough because every Pomsky contains a husky and this is not only reflected in the look.

Once you have found a Pomsky breeder it is important that you take the time to visit them and see the environment in which the Pomsky puppies are bred. Reputable breeders who have dedicated themselves to Pomsky breeding will be happy to give you insights into breeding and also enable you to get to know the parents. Since the breed is not recognized in Germany and there are no breed standards, it is particularly important to take a closer look at the parent animals and the breeding company. 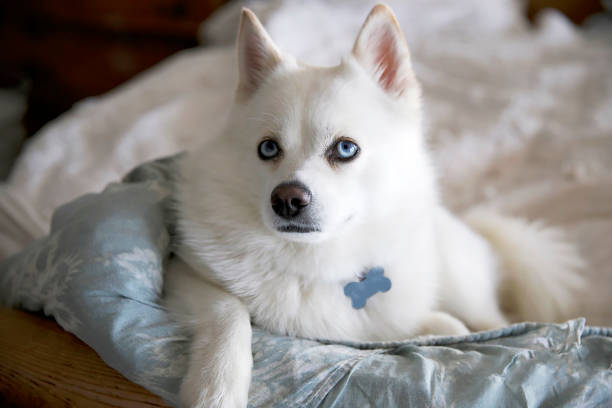 Breeders who take their job seriously also have the veterinary records of the parents and puppies on hand. The puppies should of course grow up in a family environment so that they are socialized accordingly. Because the small-sized sled-hound dog isn’t exactly straightforward, a reputable breeder will ask you a few questions so they can be sure you’re up to the task of being a good owner for the Pomsky.

A Pomsky definitely has a mind of its own, even as a puppy. Puppy age in particular is formative and so it is important that mini huskies are socialized in the first phase of life. The better the socialization in puppyhood, the more suitable representatives of the breed are for inexperienced owners. Especially with the Husky and Pomeranian breed, it is not always clear in the F1 generation what characteristics a puppy has and so you, as a future Pomsky owner, should be prepared to adapt to the dog and adapt the training to the character of the puppy.

Basically, you should educate the active animals from the beginning. Here you should proceed lovingly, but also consistently. Polsky is very intelligent and learns quickly, but animals try to get their way and are quite persistent in doing so. Even a well-trained Pomsky will exhibit a certain stubbornness at times, so training should remain an issue even with adult animals.