Along with the Skye Terrier, the West Highland White Terrier, and the Cairn Terrier, the “Scottie” is one of the four well-known Scottish dog breeds that were originally bred for hunting. Today, Scottish terriers are bred almost exclusively according to show criteria and are much shorter-legged than they were 100 years ago. Here you can find out how the dogs with the distinctive mustache differ from their relatives.

Characteristics of the Scottish Terrier: Small, Angular, and Solid

The Scottish terrier can be recognized from afar by its typical body shape. He is rather short-legged and reaches a height at the withers between 25 and 28 cm. Its head appears very long in comparison to the body; in addition, long hair on the snout ensures a rectangular look. Also distinctive for the breed is the straight finger tail, which they share with the West Highland White Terriers. A healthy Scottie weighs between 8.5 and 10.5 kilograms.

The Scottish Terrier from head to tail 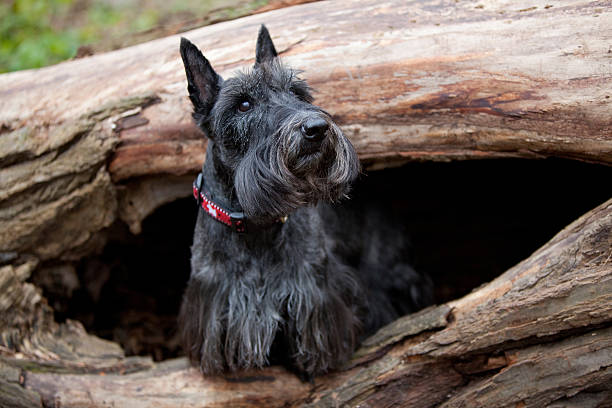 The Origin Story of the Scottish Terrier: A Hunting Dog for the Show?

Modern dog breeding, which is largely shaped by dog ​​shows in which animals are judged and categorized according to their appearance, emerged in the last third of the 19th century. Until the introduction of dog shows and breed standards, all smaller Scottish terriers of the Skye type (named for their origin, the Isle of Skye) were known as “little Skye Terriers” or “short-haired terriers”. In 1879 the first Scottish Terrier (then known as the Aberdeen Terrier) was shown to the public.

Each farm with its own terrier breed

Before the West Highland White Terrier, Dandie Dinmont Terrier, and Scottish Terrier were differentiated, smaller terrier breeds from Scotland were only divided into Scotch Terriers (rough-coated) and English Terriers (soft-coated). The ability to hunt vermin and track down and incite construction game was important for breeding selection. Aberdeen Terriers, as Scotties used to be called, are descended directly from these Scotch Terriers.

Where do short-legged terriers come from?

So-called earth dogs were already used on farms in Roman times to kill rats and chase foxes out of their dens. Depending on the region, different beats with different characteristics developed. Due to their long history as construction dogs, Scotties remain confident and bold dogs that have never lost their hunting instincts.

Interesting facts about the Scottie

Nature and Character of the Scottish Terrier: Fearless and Alert

Scottish terriers behave just like fine Britons. They are said to be somewhat arrogant because they know exactly what they want and have limited acceptance of deviations. The self-confident little guys are very intelligent and pay close attention to their surroundings. Despite this, they don’t tend to bark like other terriers – on the contrary, they rarely get angry, even if it’s just for fun. When it comes to hunting, they can be persistent and obedient (if they choose).

This is what makes the Scottie so unique