The ancient Shar Peis from China were considered almost extinct in the 1970s, but have been successfully bred. They are very different from European dog breeds, both genetically and visually. Their blue tongue, the pronounced skin folds all over their body and the large head are distinctive features. As former fighting dogs, they need loving training and a lot of variety in everyday life.

The Appearance of the Shar-Pei: it Could Hardly be More Conspicuous

On the street, a Shar Pei is sure to turn heads. The head, face, coat, and tail differ significantly from the European understanding of the domestic dog. The dog breed is medium-sized with an average height at the withers of between 44 and 51 cm for males and females. Depending on their build and gender, they weigh between 16 and 29 kg. The skin of puppies lies in folds all over their bodies – these smooth out over the course of their lives. Adult Shar Peis usually only have pronounced skin folds on their face and neck. The Chinese breed standard differs from the western standard for the dog breed.

Three different strains of the dog breed are bred by enthusiasts. All types have thick, bristly hair that is the same length throughout the body. The coat is monochromatic, dark masks are common with lighter colors. 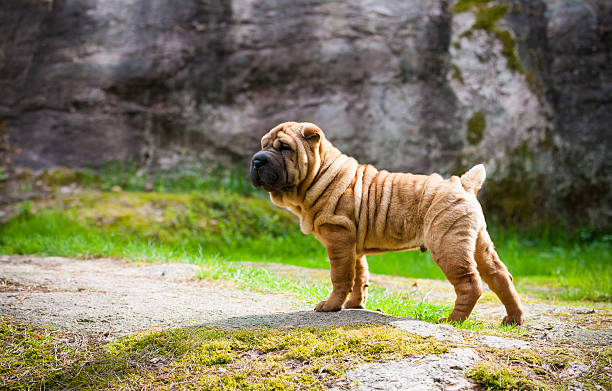 The skin of the Horse Coat Shar Pei smoothes almost completely as it grows. His fur is very short and dense and he does not develop an undercoat. For this reason, he sheds pleasantly little, but he is also a little more susceptible to cold. Compared to other Shar-Pei types, the Horse Coat is also built a little more sportily and weighs less.

The Brush Coat Shar Peis are visibly bulkier than Horse Coats and they retain their loose folds all over the body even in adulthood. Although this makes skin problems more common, this breed type is the most common. The fur is a few centimeters long and comparatively soft thanks to the dense underfur.

Also known as fluffy coats – they wear thick and relatively harsh stick hair all over their body except for the fangs. The fur is relatively long but sticks out rigidly from the body, similar to the Chow Chow. This genetic mutation is very rare and affected dogs are not approved for breeding under the FCI breed standard.

The Shar-Pei from head to tail

Colors of the Shar-Pei

The Chinese breed standard sometimes differs greatly from that of the American and European conspecifics. Chinese Shar Peis are larger and more powerful than western representatives of the dog breed. Breeders in China prefer the Horse Coat type and ensure that the head of breeding animals is not too large in relation to the body. The snout also looks a bit narrower on Chinese Shar Peis and tapers towards the tip. In Europe, the large head and strong wrinkling are considered aesthetic characteristics of the breed and are encouraged inbreeding, which is at the expense of the animals’ health.

The Shar Pei’s belong to the so-called original dog breeds and have been domesticated by humans for thousands of years. The first records of the dog breed date back to the 2nd century – at that time dogfighting in China was becoming increasingly popular and the organizers chose the dominant and powerful working dogs from the lower classes of society for their breeding lines.

The Shar-Pei as a fighting dog 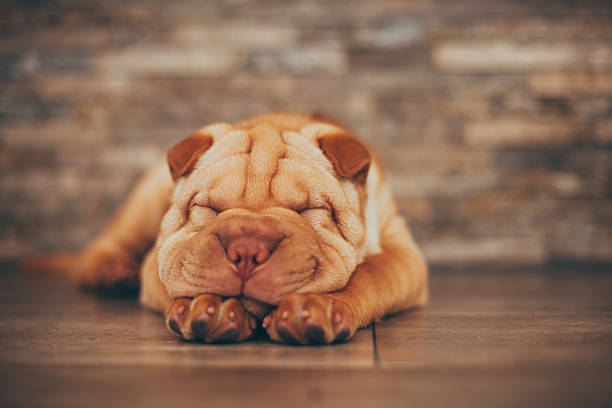 Throughout their careers as fighting dogs, Shar Peis have been crossed with numerous different breeds so that the original types would find worthy opponents in the fighting arenas. Genetic testing has shown that the breed is more closely related to wolves than other dog breeds, making late crossbreeding with Chinese wolves likely. In addition, Chow-Chows and later European Mastiffs were crossed over the centuries, giving the dogs their massive heads and blue tongues. Thanks to their loose skin, the dogs can also turn to their opponents if they bite down. Thanks to the rigid and bristly coat, scratches and bites penetrate less easily than in dog breeds with softer coats.

In the 20th century, interest in dogfighting in Chinese society waned and Shar Peis became less common. In the 1970s there were only a few copies in Hong Kong and China. According to some sources, the Bear Type Shar-Pei goes back to a crossbreed that was brought to the United States as one of three purportedly purebred Shar-Pei. Today, the dog breed has recovered, but due to poor breeding selection and a small gene pool, quite a few breed-specific diseases have developed.