The affectionate and charming Shih Tzu is an ancient breed of dog from Tibet that is now popular primarily as a companion dog. Here in the profile, you will learn everything about the history, nature, and the keeping of the Tibetan dogs.

History of the Shih Tzu

The history of the Shih Tzu goes back a long way, as the dogs are said to have existed in the monasteries of Tibet as early as the 7th century. According to legend, Buddha owned a dog that could turn into a lion. For this reason, the monks bred small dogs designed to resemble a lion and named them “Shih Tzu”, which means lion. In addition, thanks to their good hearing, they were also suitable as guard dogs for the temples.

During the 17th century, these dogs entered the Chinese Empire, where they evolved into palace dogs. With the communist takeover of power in the 20th century, the enthusiasm for the elegant dogs came to an abrupt end. So came the final end for breeding in China. Fortunately, European and American breeders were found who took over the breeding. In 1934, the dogs were recognized as a separate breed and are now classified in FCI Group 9: Companion and Companion Dogs in Section 5: Tibetan Dog Breeds. The Chinese also use the term lion dog for the Pekingese and the Lhasa Apso. 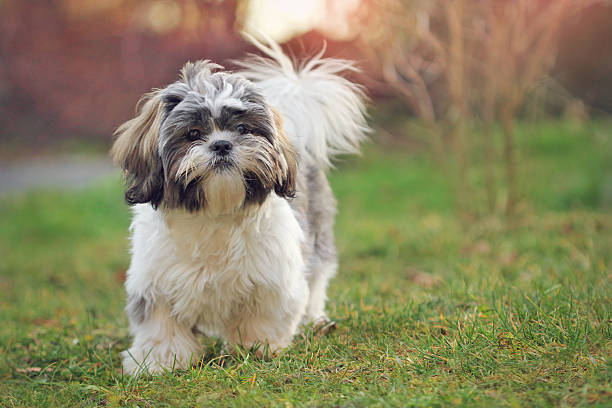 The Shih Tzu is a smart and outgoing dog that is friendly towards its people. He is often in a good mood and knows how to make masters and mistresses happy. The somewhat arrogant dog has a proud demeanor and loves to be the center of attention. Very charming, he demands his petting and quickly becomes everyone’s favorite. Thanks to its open and affectionate nature, it is a great family dog ​​that gets along well with children. He is reserved with strangers at first, but warms up quickly and likes to be cuddled.

Being close to his people is very important to the cheerful and loyal dog and he likes to be everywhere. The clever dogs can come up with a few tricks that even surprise their owners. His hunting instinct is weak, which is why walking off a leash is not a problem for him. The Shihs are open-minded towards their fellow dogs and willingly play until old age.

The Appearance of the Shih Tzu

The Shih Tzu is an elegant, small dog with a long, silky coat. The fur is particularly dense and tousled on the head so that some of the ears cannot be seen at all. Many coat colors are permitted, with both solid and piebald variants being common. So that the long hair does not cover the face, it is often tied together on the head in a braid, the so-called top knot. Alternatively, you can shear the Tibetan dog.

Independent and intelligent dogs are considered to be extremely stubborn when it comes to training. It takes a lot of patience and positive reinforcement to convince the dog to give a command. With his charming nature, the little rascal sometimes even tries to convince his master or mistress of his own will. But don’t let this confuse you and continue purposefully. Consistent training with many repetitions is the key to success. It works best, however, if you give the dog the feeling that it was his idea to follow the command.

Activities with the Shih Tzu 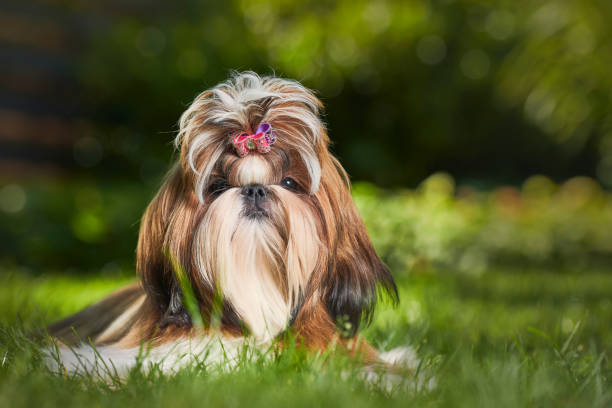 The Shih Tzu is an adaptable dog that will thrive even in a small apartment. Especially when he doesn’t like the weather, he prefers to stay indoors and cuddle and play. Of course, he still needs daily walks to be sufficiently busy. Entertaining games between walks are just as much fun for the little dogs. You don’t have to be particularly creative to do this, as the undemanding dog can occupy itself with a wide variety of toys for a long time.

The Shih Tzu is very difficult to care for due to its long coat. The fur can grow so long that it drags along the ground if not trimmed regularly. If you want to keep a dog with a long topcoat, you have a lot to do. The hair on the head must not fall into the eyes, otherwise, they will become inflamed and the dog will have difficulty seeing. Regular brushing and combing are also on the agenda so that the dog does not become matted. After every walk, you should free the long fur from dirt and bugs. A fashionable short hairstyle is a bit easier to care for, and you can either shave or have it done by a dog groomer. In warm temperatures, long-haired dogs are prone to heatstroke. Otherwise, there are no diseases typical of the breed.