Although it originated in Tibet, it was completed in its present form in China. It probably owes its Chinese name, which translated means “lion dog”, to its flowing fur.

The Shih Tzu is the lion dog with a chrysanthemum-like face. His posture is described as arrogant. Why not perform in this way? After all, the Shih Tzu dog breed looks back on many centuries of history in the monasteries of Tibetan monks and at the imperial palace in China.

From the country of origin Tibet, the Shih Tzu came to the Middle Kingdom in the 17th century. Few dogs can come up with such special references. In the last century, the situation for the Palace Dog has changed drastically within its Asian homeland. Like many other dogs in the country, he no longer fits into the image of communist ideas. His posture becomes a luxury.

Lovers in Europe and America take on the breeding and ensure the continued existence of the lovable dog breed.

The adult Shih Tzu reaches a maximum shoulder height of 27 centimeters and a weight of four and a half to a maximum of eight kilograms. As a smaller representative of the more than three hundred dog breeds recognized by the FCI, his standard with the number 208 is under the patronage of Great Britain. 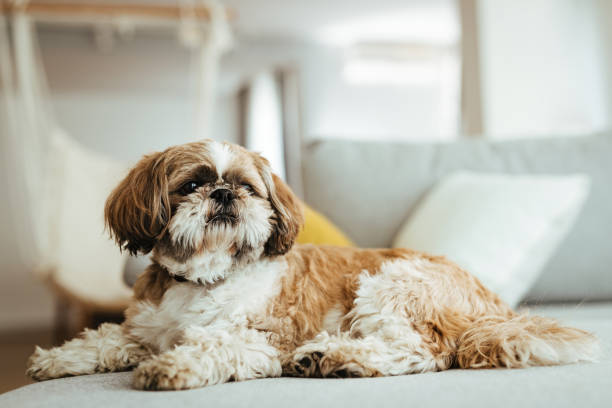 The Shih Tzus, one of the oldest dog breeds, seem to be aware of their origins, their personality is sometimes so idiosyncratic. Nowadays, the Shih Tzu is considered a domestic dog that can decorate any home and guard it as well. The character of Shih Tzu is considered playful and yet very energetic. Her sometimes arrogant demeanor is even described in the standard: full of self-confidence and fully aware of her own importance.

The family and companion dog wants to decide what to do with it. Basically, however, the togetherness with his people is part of it. The cheerful goblin also likes to have children or other pets near him. Strangers, on the other hand, have to prove themselves first. The watchdog genes have stayed with the alert Tibetan. When it comes down to it, the males of the short breed take on much larger four-legged friends.

The Shih Tzu does not put the inexperienced dog owner to a hard test. The prerequisite for this is that the person takes care of the education of his charming companion with skill. The Shih Tzu is docile and can be as headstrong as a cat. Love and consistency paired with sufficient freedom for the individualist help to successful socialization.

It is important to convince your little lion in a playful way and to take it with you on the right path. For all two-legged pack members, this means pulling together.

The intelligent four-legged friend immediately recognizes exceptions to the rules and uses such loopholes without inhibitions. Under certain circumstances, this leads to the failure of all efforts.

Shih Tzus have a wide range of physical activity needs. One dog likes to accompany people jogging, others like it quieter and prefer interesting hikes.

The hunting instinct does not stand in the way of this, it is not very pronounced. Sufficient activity offered on a regular basis also satisfies energetic specimens.

You are balanced within your own four walls. Here the former temple guard with the good hearing kept as a single dog, hardly barks. On the other hand, there is a lot going on in the association together with the conspecifics. Like most short-headed dog breeds, the flat-nosed little one doesn’t like the heat.

In the ideal type, the robust dog has floor-length and lush fur. The dense and smooth to slightly wavy coat covers a moderately pronounced undercoat. It is not limited in color.

Repeated combing and brushing within a week must become routine in order to maintain the dog’s hair structure and distinctive appearance. Otherwise, felting is inevitable. After all, there is no annual coat change. Special dog fur brushes help to remove loose hair from the coat.

Adverse weather and activities with the four-legged friend off the beaten track quickly make the fur dirty. In addition, undergrowth and branches collect in it easily. Here it is important to let the hair dry and then comb it through. If necessary, it sets up a bath with plenty of water and special dog shampoo. 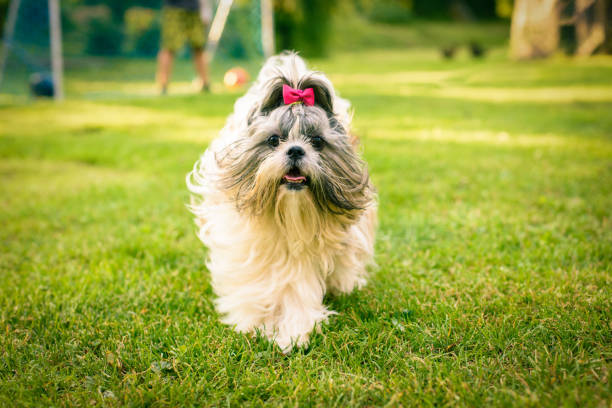 The trimming of the hair coat, as well as the shearing, depends on the individual taste of the owner. On the other hand, taming the braid with hair clips has clear advantages for the dog’s eyes. The dog looks good and there are no irritations of the sometimes slightly protruding eyes.

As is so often the case with the Shih Tzu, there is not one hundred percent agreement on the exact origin. In the tradition of Lamaism, the heavily Buddhist religion of Tibet, there are certain references to a small dog that accompanied the god of learning, Maujusri, and was able to transform into a lion.

However, the ruler of Tibet, the Dalai Lama, often had Lhasa Apsos presented to the Chinese emperors as a gift and it is quite possible that these dogs were then crossed with the local Pekingese in China, from which today’s Shih Tzu could have emerged.