Welcome to your Complete Guide to the Border Collie German Shepherd Mix Dog!

The “Shollie” or a Border Collie x German Shepherd is a cross between two super-intelligent and high-energy dog ​​breeds, both of which belong to the herding group.

We learn something about the Border Collie and the German Shepherd Dog (or GSD), about the possible appearance, personality, and characteristics of their hybrid offspring.

Together with the suitability of a German Shepherd Cross Border Collie as a family dog.

Read on to get to know the German Shepherd Collie Mix Dog!

What is a Border Collie German Shepherd Mix? 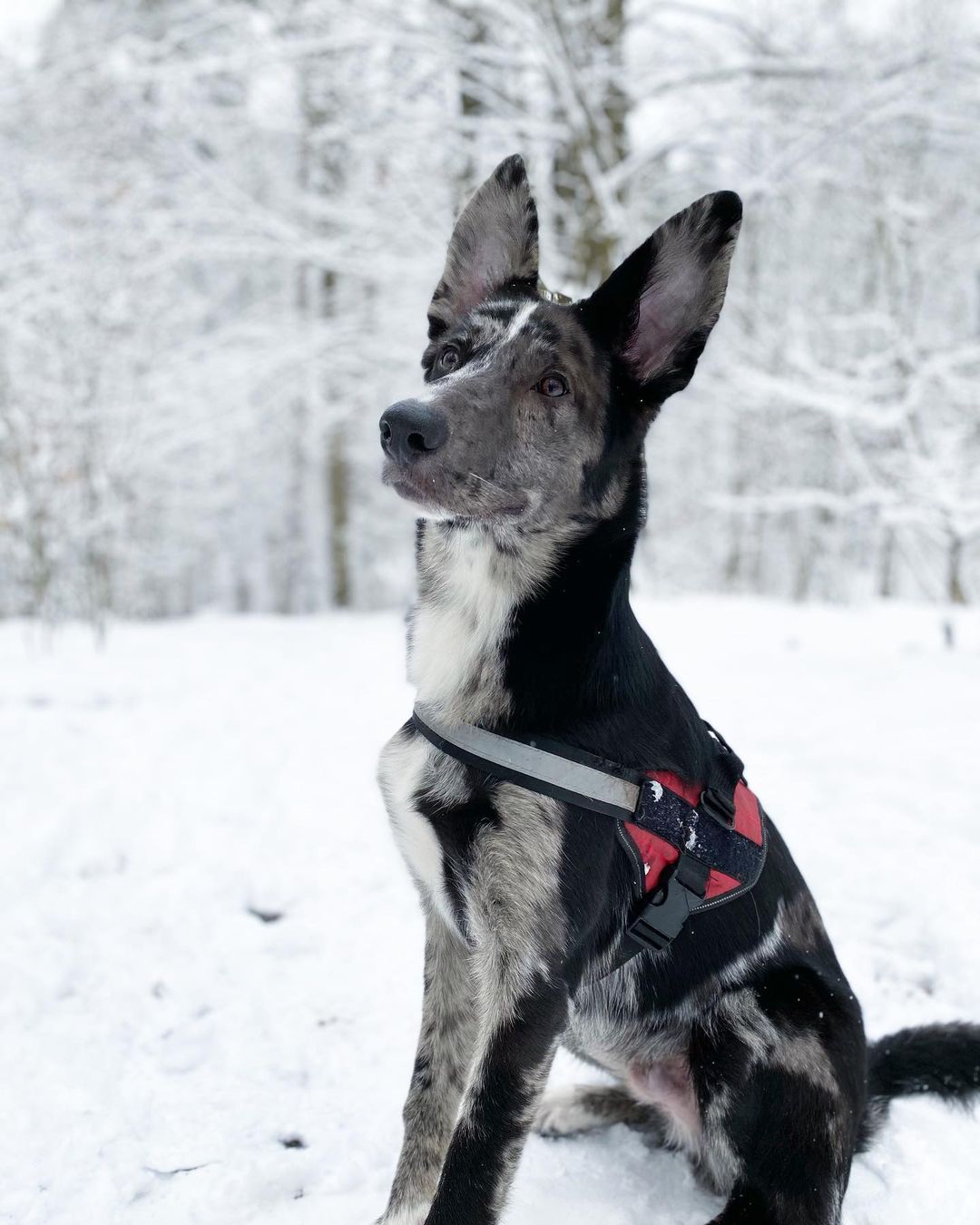 Given their heritage, it can be assumed that the hybrid was the result of a desire for the ultimate big dog.

One who possesses the athletic ability, agility, and a protective but playful nature … But the real origin of the hybrid is a bit unclear.

Let’s talk about what makes the German Shepherd x Collie so special!

Where does the German Shepherd Border Collie mix come from?

Here is a brief history of the parent breeds of the Shepherd Border Collie mix.

Similar to Shollie, the border collie’s true origin is unknown. It is believed that they first became known in Scotland. Early collies were bred there to do the same thing they do today. Protect herd and livestock.

Shepherds like the border collie have been around for centuries. Although the American Kennel Club (AKC) did not officially recognize the breed until 1995.

Modern border collies are still excellent working dogs, especially on ranches. You can also find them in the agility ring for dogs or as popular pets.

Here you can find out everything about border collies.

Another herding breed, the German Shepherd Dog (GSD), was bred in Europe. Formed to create the ultimate herding or guide dog. The German Shepherd had to be tough in a climate where working outdoors is often brave despite cold weather and damp conditions.

The GSD eventually evolved into a refined breed known for their endurance and work ethic. The AKC officially recognized the breed in 1908.

Shepherds later became involved in military, police, and service work. All areas in which you can work today.

You can find out everything about German Shepherds here. 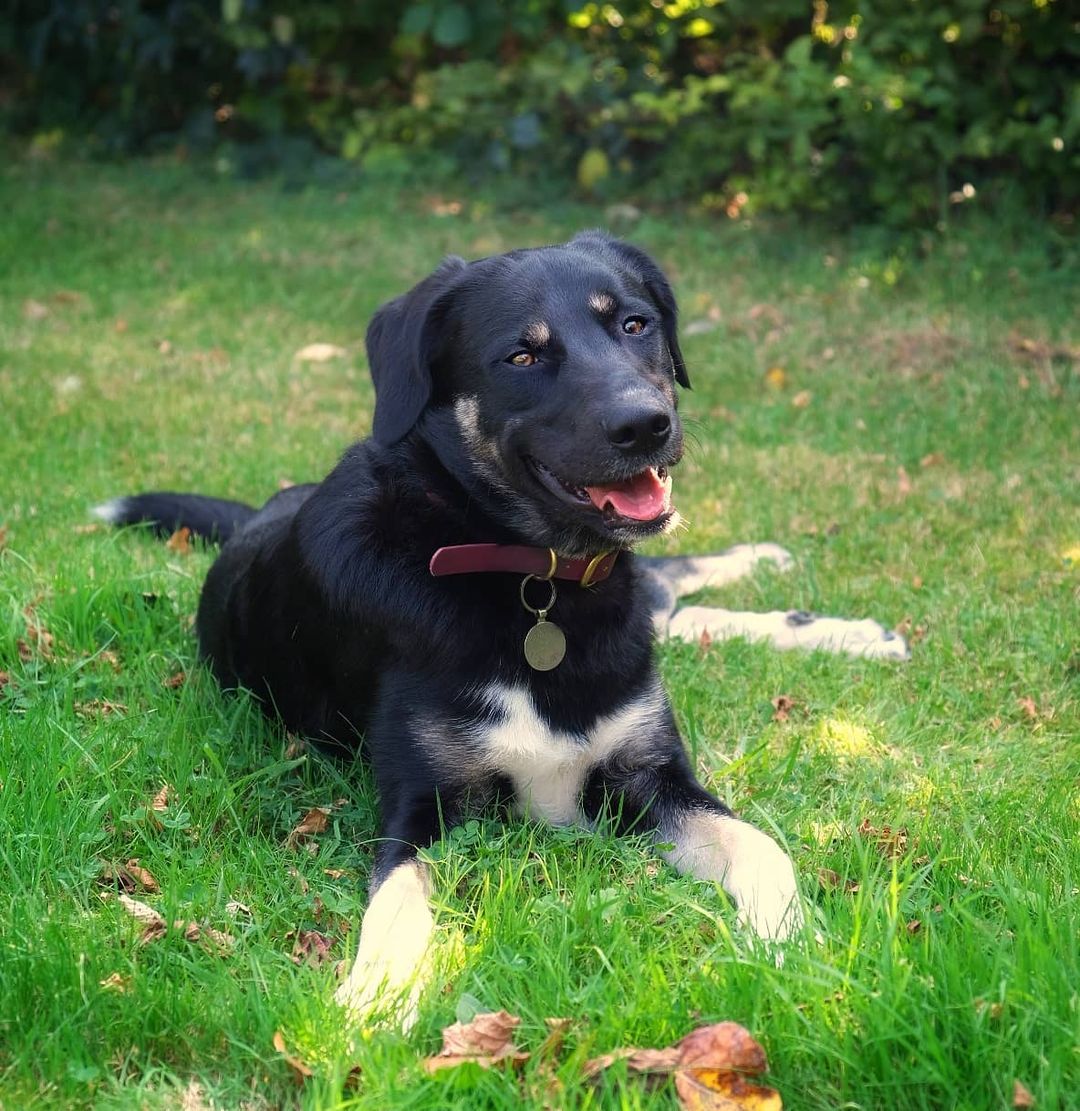 As with all mixed breeds, it is difficult to say how the offspring of two purebred dogs will perform in terms of appearance, health, and temperament.

Bringing home a hybrid dog, especially a large one like the German Shepherd x Border Collie? It is important to determine his or her potential suitability as a family member.

You should look at the temperaments of the hybrid puppy’s parents as well as the general temperament of the parent breeds.

As mentioned earlier, German Shepherds are often found in the police and military sectors. This way of working has unjustifiably notorious for the breed because of its aggressive behavior.

German Shepherds should not all be viewed as aggressive dogs.

For beginners, police and military dogs are highly trained and intelligent animals. They will only since “the bad guy” when instructed to do so by their handler.

Second, shepherds were bred to be very loyal to their owners and homes.

By properly training and socializing with other dogs and strangers at an early age, you can often prevent a wild loyal personality from erecting its ugly head in a GSD pup. 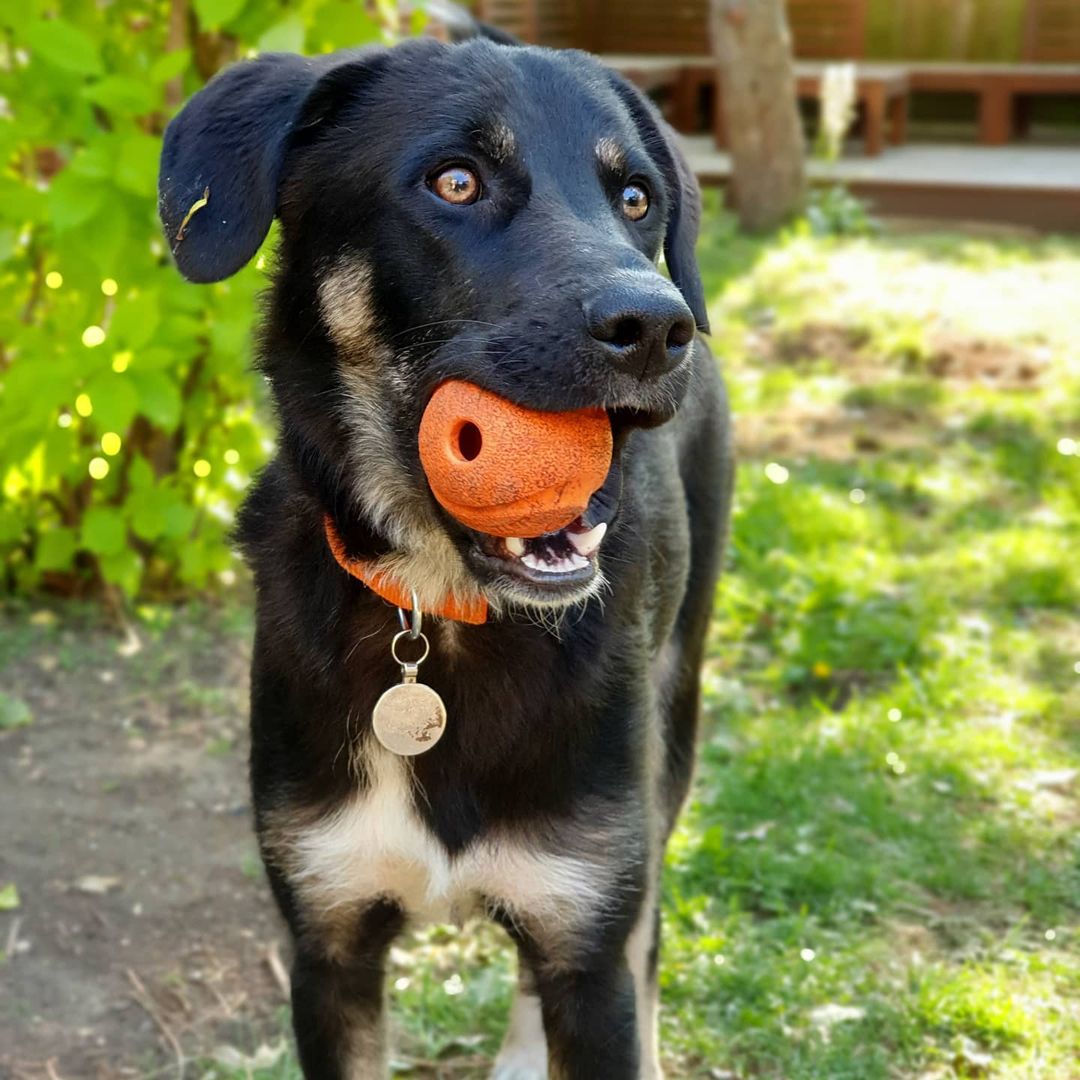 However, they are also similar to the GSDs in that they have a functioning way of thinking and, so to speak, are not always “with the children”. They will fiercely protect their home and owner. However, early training and socialization can prevent this behavior.

In addition, of course, border collies are very curious dogs who do not like to sit without work or play.

This can sometimes lead to destructive behavior. Especially when a collie is locked up and kept without toys or other enrichment activities.

With this in mind, it is likely that a Collie Cross German Shepherd will need to be kept as a working or sporting dog. Unless you will be able to exercise him frequently and give him things to keep his brain in focus.

You also need to have plenty of time to train and socialize a Collie German Shepherd if you want him or her to show a more sociable side.

Although a hybrid puppy can be an equal mix of its purebred parents. There is also a chance that the puppy will follow up more than the other parent. You should also be prepared to deal with such a situation. 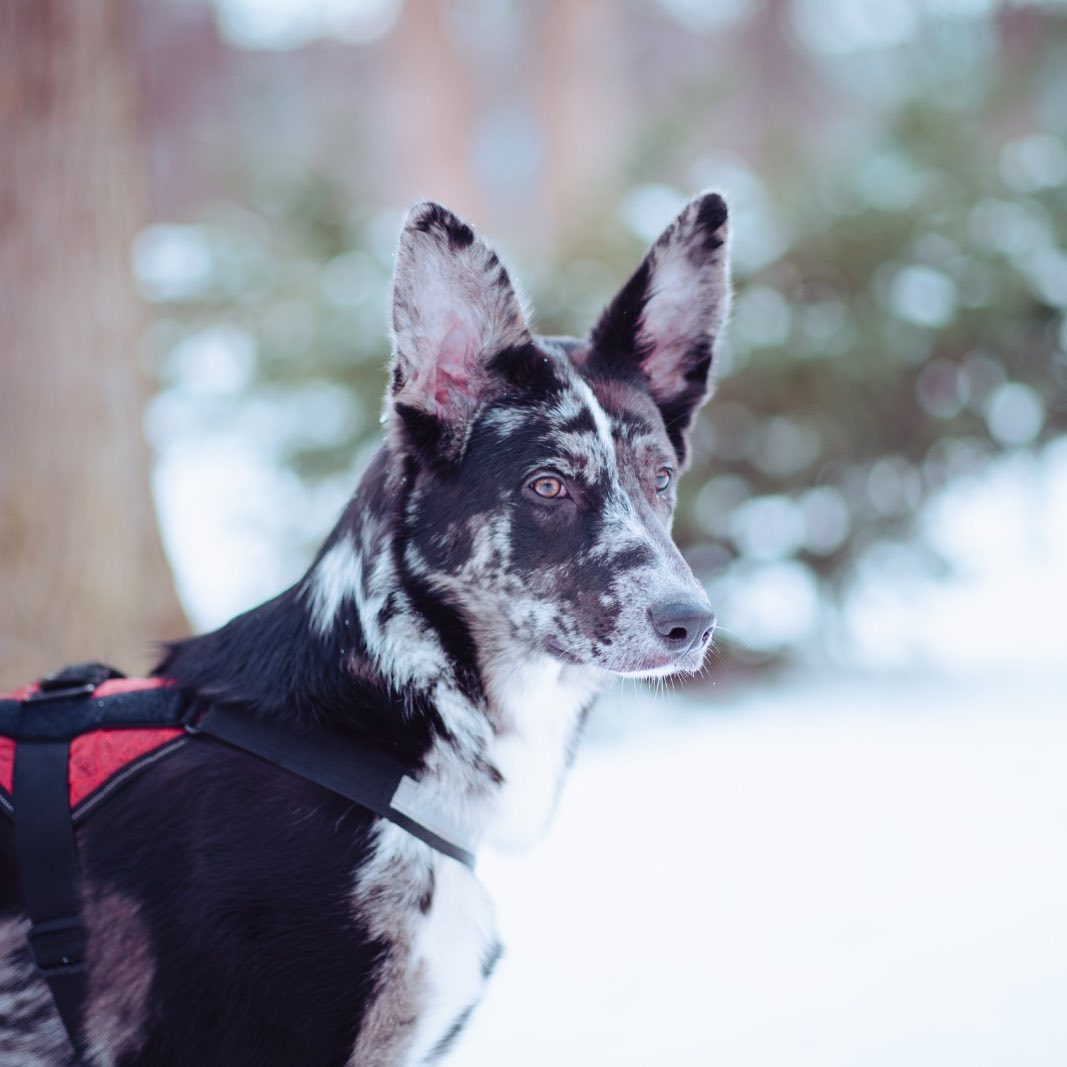 The German Shepherd and Collie mix has the potential to be a medium or large dog.

When the puppy chases after its GSD parent, it can mature anywhere from 80 to 90 pounds. If she moves after her Border Collie parent, she can only get around 40 pounds. Most pups will fall somewhere in between.

You can expect the German Shepherd Collie to reach approximately 22-24 inches at the shoulder.

When it comes to hybrid dogs, you really can’t predict with any certainty what they will look like. Nor what color (or length) their coats will be.

The only clue you have is the parent’s appearance. Along with the standard colors assigned to the parent races.

Another possibility is the fact that hybrids look like a mix of their parents. Or they are more similar to the race of one parent than the race of the other parent.

If a Shollie inherits its GSD parent’s genes more than that of its Border Collie parent, it may have Shepherd’s solid coat and black spots.

If he inherits his Collie parent’s coat, his coat can be any of 17 colors. Including black, blue, blue merle, brindle, red, sable, the “traditional” black, and white coat, etc.

Given the above, it’s pretty safe to say that Shollies are most likely two-tone.

Moreover, it’s a wait and sees! 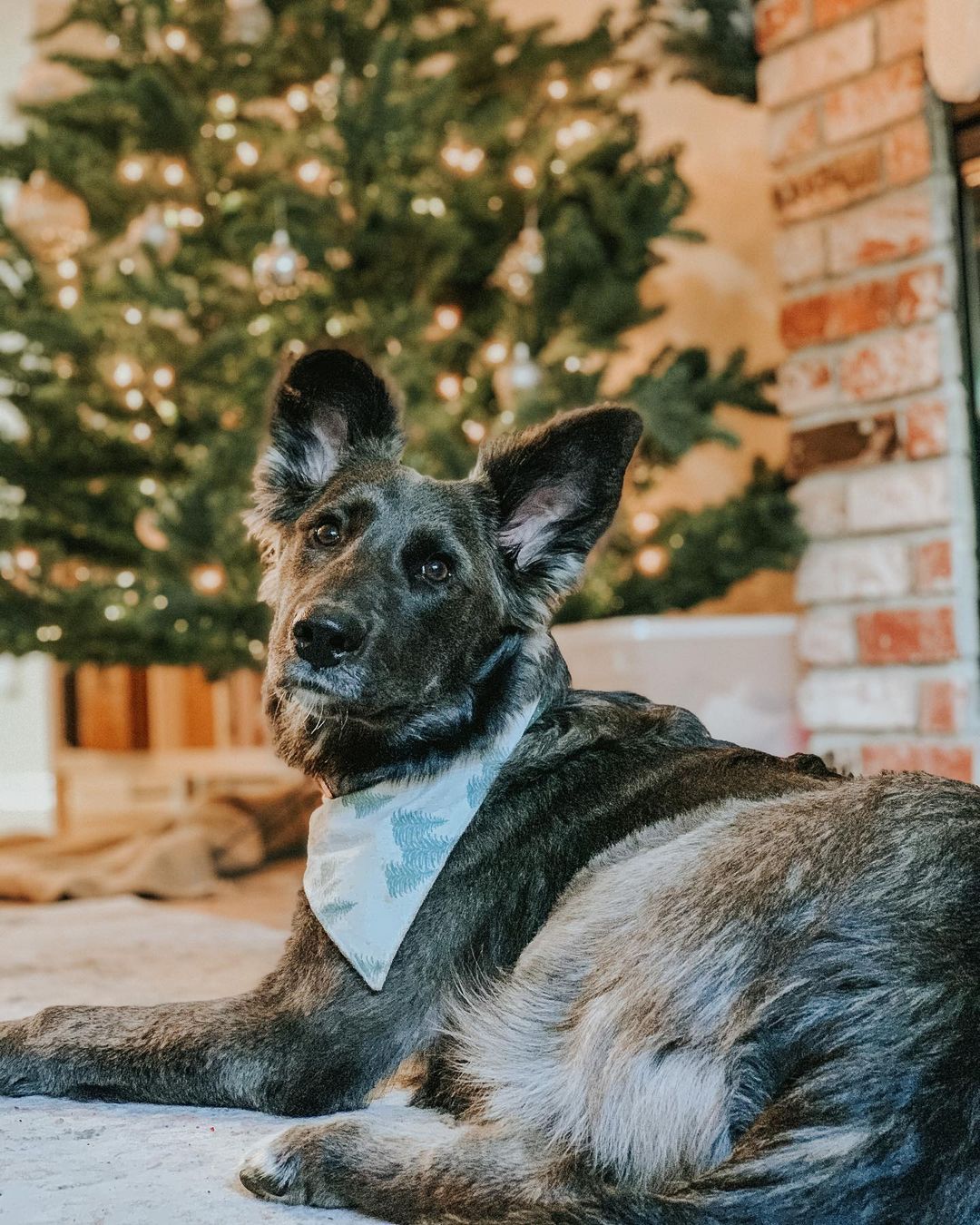 The breeder should have a good idea of ​​what your pup’s custom coat will look like when you bring him home after eight weeks.

No matter which parent it resembles, a Shollie needs to be cleaned weekly. This need will increase as seasonal waste occurs.

It is likely that they are quite tall dogs, so you will need to invest in a good quality pet vacuum cleaner. 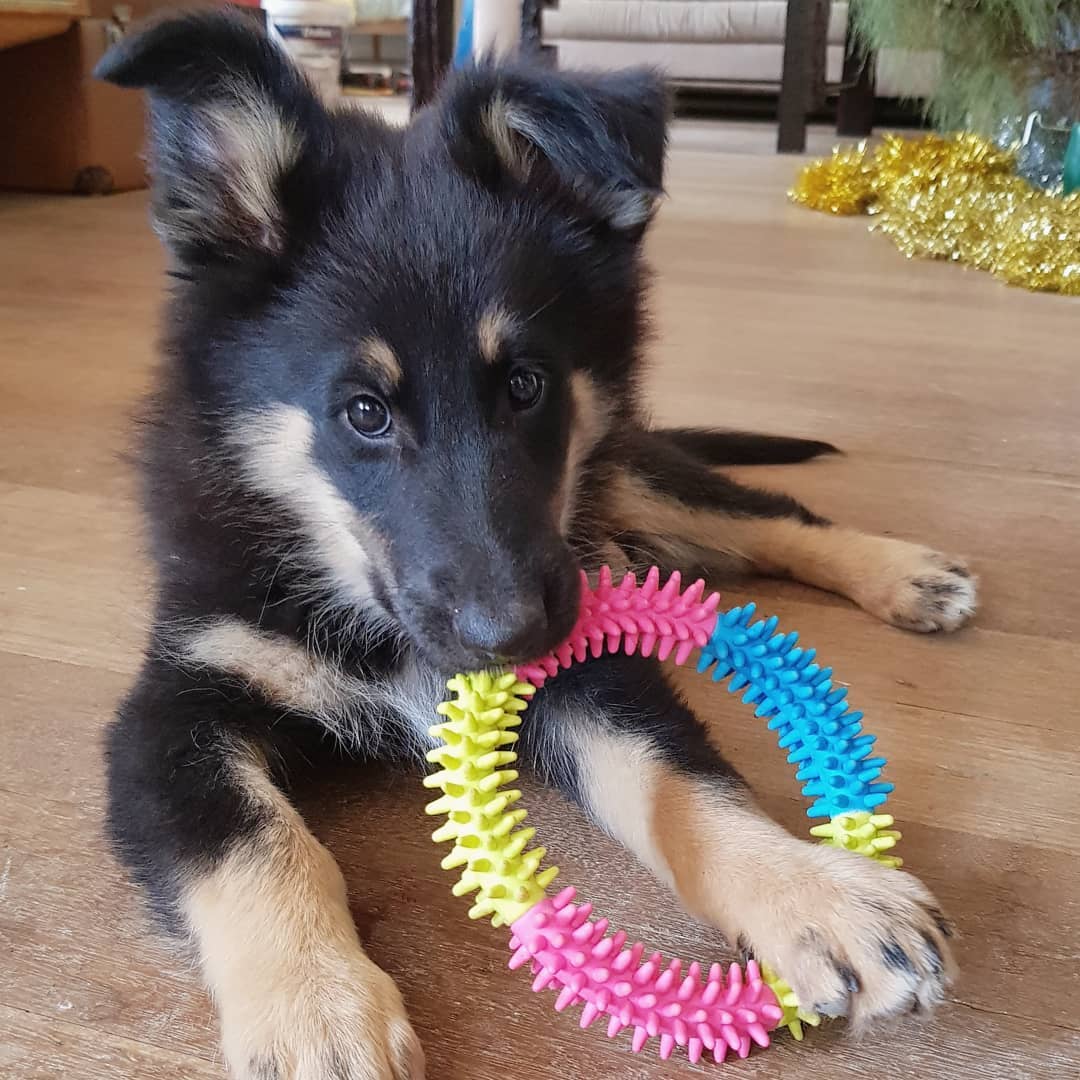 Any type of dog, purebred or mixed breed, can suffer from inherited or age-related health conditions. B. Dysplasia of the hip or elbow, eye diseases, allergies, and skin irritations.

However, German Shepherd and Border Collie mixes are particularly vulnerable to the conditions their parent breeds often develop.

To learn more about the diseases and conditions a border collie is prone to, check out our article on border collies.

It should be noted that both German Shepherds and Border Collies are prone to hip dysplasia. Therefore, Shollies can be particularly at risk of developing this condition. In the next section, learn how to prevent or reduce the severity of hip dysplasia. 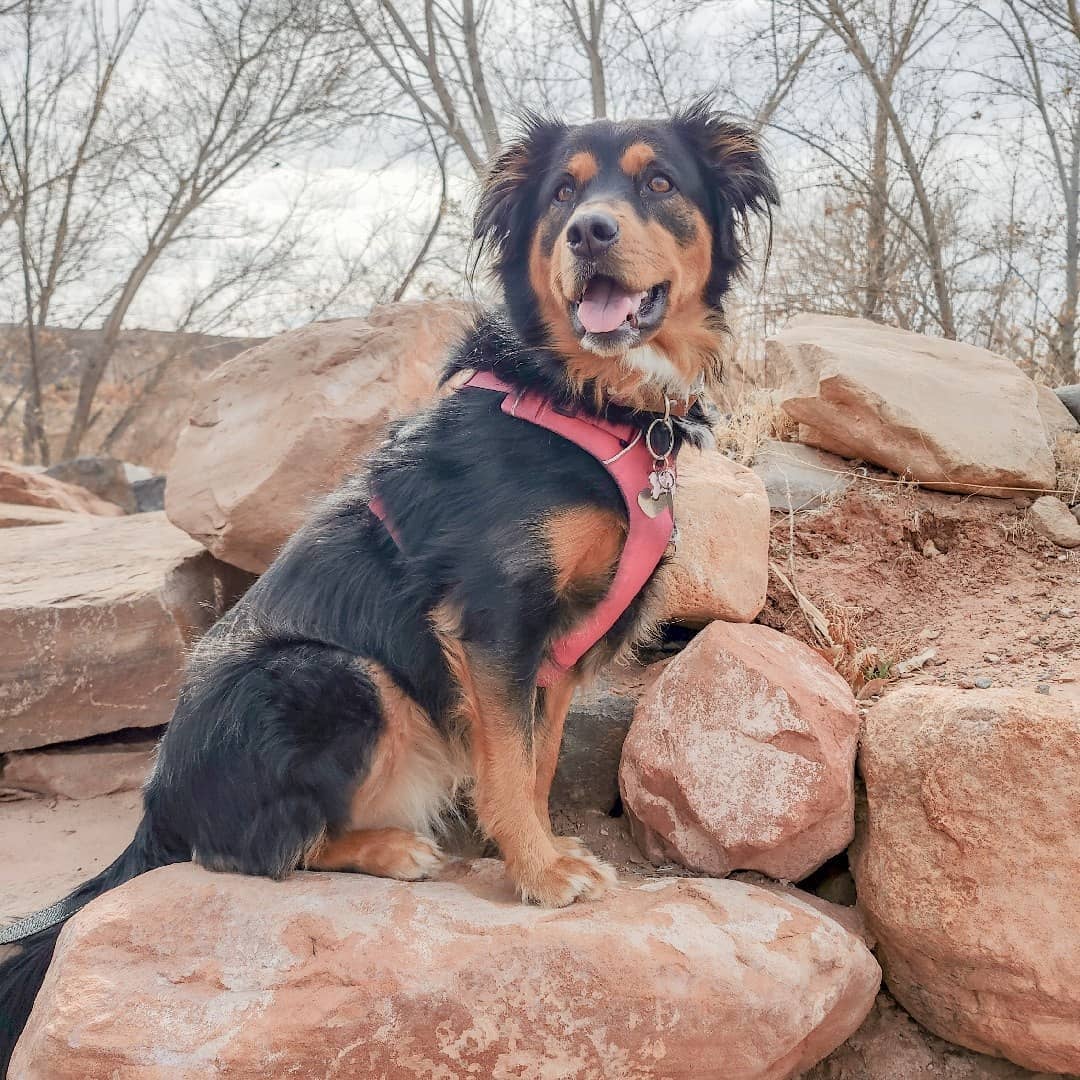 Since Border Collie German Shepherd Mix dogs are particularly prone to hip dysplasia, you need to make sure that your Shollie’s weight is maintained. That means you need to plan for daily walks, playtime, and fun activities when your dog is out of work.

Since both Border Collies and German Shepherd Dogs are high-energy breeds that love to be mentally stimulated, it is best that they not be locked up for many hours at a time.

This mixed breed is not a good candidate for living in an apartment, for small houses, or for a home without yards.

A mixed-breed dog usually has the same lifespan as its parent breeds.

Hence, a Shollie can be expected to live between 10 and 15 years of age, although there are some Border Collies that can make it to the age of 17.

Buying or taking over a Border Collie with German Shepherd 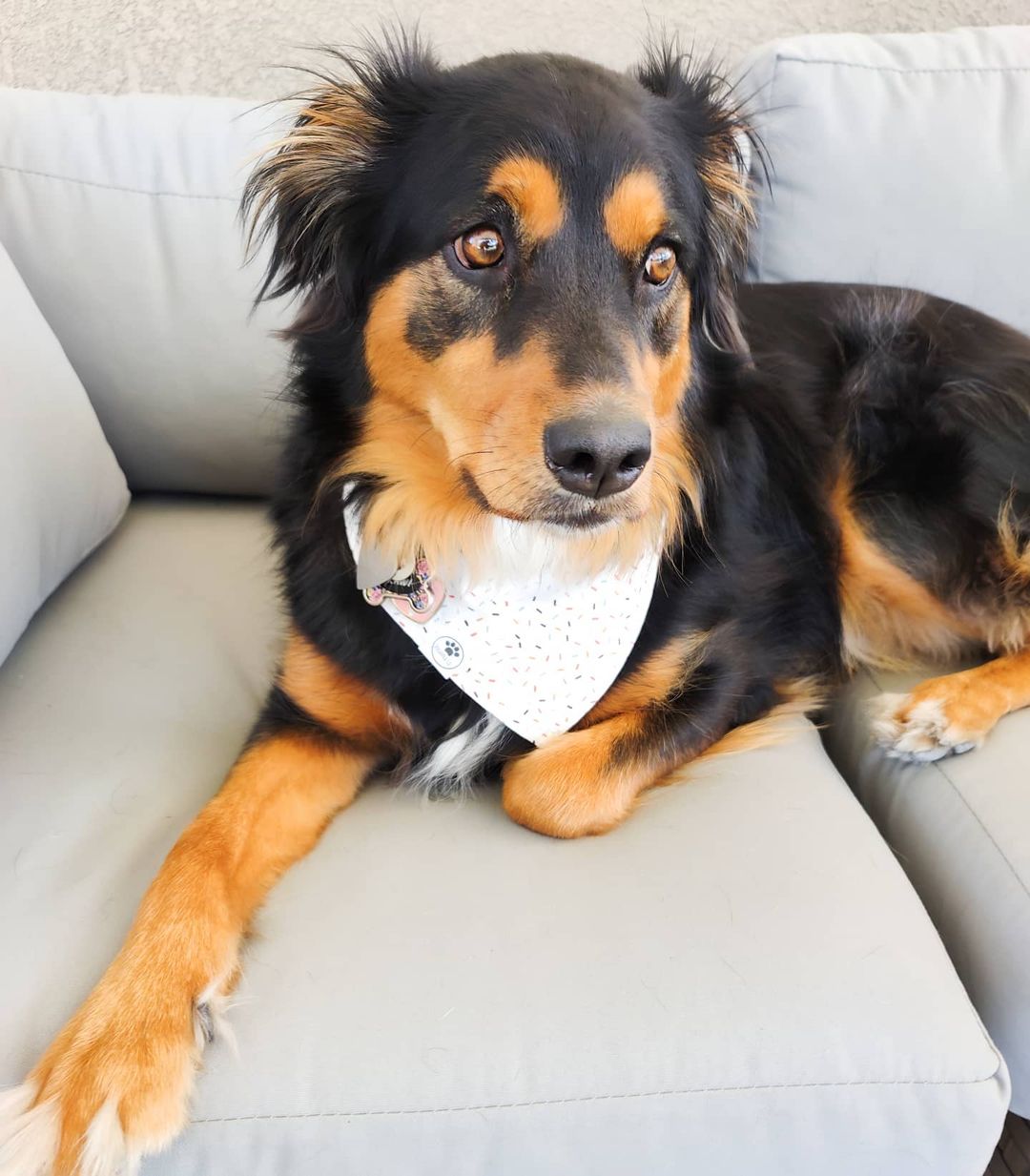 Since purebred dogs are often the focus of breeders, it is more likely that you can find Shepherd Collie puppies to choose from at a local animal shelter or humane society. Adopting a dog is generally a fairly inexpensive process.

However, when you find a breeder who specializes in designer dogs like this one, you know your cost will increase by the value that is placed on the stock. 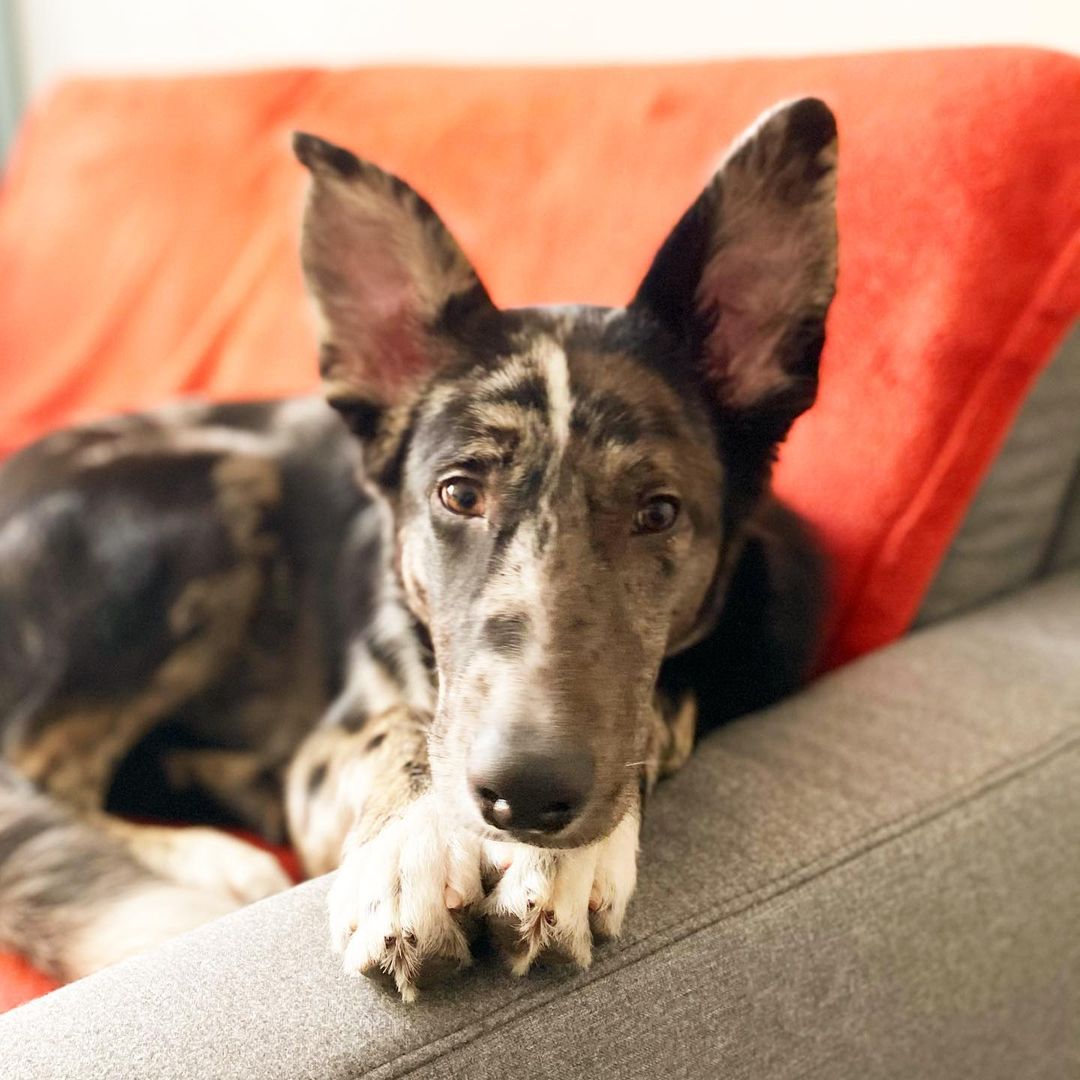 Before introducing a Border Collie German Shepherd mix into your family, there are a few things that are important to consider about this breed.

For starters, Shollies are medium to large working dogs that need a lot of exercises. You cannot keep one in a small apartment or house with no space for self-exercise.

Weight gain is of particular concern for this hybrid as it is prone to developing hip dysplasia. Genetic testing of parent animals can determine if a puppy you are about to buy is at particular risk of developing the disease.

Collie Shephard Mix dogs also have a nose for mischief when out of a job. They must have something to fill their smart minds or they will turn your home into a giant chew toy!

Additionally, Shollies may not be the most suitable breed for a household with young children and/or many other dogs.

Both German Shepherds and Border Collies are known for their workforce and incredibly loyal natures, a combination that isn’t always beneficial, especially when other people are “intruding” into the dog’s home.

Should I Buy a Border Collie German Shepherd Mix?

There are many factors to consider when deciding whether to bring a Shollie puppy into your home. Does that mean Shollies shouldn’t be kept as family dogs?

When you get a Shollie puppy, you can socialize him with other animals and people because of his naturally intelligent and highly trainable nature.

You can also use it to work on obedience so that the tendency to “wake up” is weakened by reaching adulthood.

Make sure you meet both parents and are satisfied with the temperaments and health tests performed by the breeder. Talk your pup out thoroughly and you could get a wonderful companion for years to come.