From the icy expanses of Siberia straight into our hearts – a real stone’s throw for this breed! The Siberian cat inspires fans of the fluffy fur noses with its lovable disposition, its loyalty, and of course its extravagant fur. But the Siberian cat also has a lot to offer apart from its beautiful appearance!

Contents hide
1 This is how the Siberian cat came to Europe
2 Appearance: How to recognize a Siberian cat
3 A beautiful fur doesn’t take care of itself – or does it?
4 Siberian cat: character and occupation

This is how the Siberian cat came to Europe

The name is no coincidence: in fact, the Siberian cat has its origins in Russia and Ukraine. There she defied the bitter cold thanks to her thick fur and quickly established herself as a popular mouse hunter. However, until the late 1980s, she was little known outside of Russia. Only in the course of the 90s did she find more and more friends in the West via the former GDR and quickly became a popular breeding cat. Since 1992, the Siberian cat has been an officially recognized breed by the World Cat Federation.

Appearance: How to recognize a Siberian cat

In order to adapt to the particularly cold weather in her old homeland, she still has a particularly dense and quick-drying undercoat. The so-called snowshoes also help here: These are small tufts of fur between the pads, which make it easier for all representatives of the Forest Cat breed (such as Maine Coons or Norwegian Forest Cats) to walk in the snow. The semi-long coat is very voluminous, especially in winter, and can be found in almost any color variant, only the colors chocolate and cinnamon as well as Burmese and Tonkinese markings are not recognized. A special class is Siberian cats with Siamese markings: these are referred to as Neva Masquerade. Otherwise, the Siberian velvet paws have a magnificent collar and so-called “Knickerbocker trousers”, i.e. particularly plush fur on the upper hind legs.

A beautiful fur doesn’t take care of itself – or does it?

The precious fur of the Siberian cat makes many a cat lover’s hairs stand on end at first glance – but this concern is unfounded! In fact, the Siberian cat largely manages to keep its own fur clean and free of knots on its own. Only when the fur is changing should a brush be used once a week. If the cat gets used to this ritual early on, it even enjoys it as a little stroking! 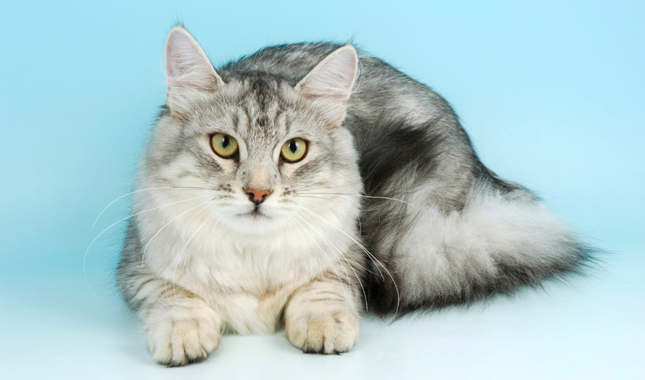 In general, the Siberian cat is a very social animal that loves to be in company. Therefore, if possible, she should be kept with another cat. The Siberian cat is also generally friendly towards other animals. It can be kept as a house cat without any problems, but should then have sufficient opportunities to climb and play. A distinctive feature of the Siberian cat is their love of water: cats love to play in a wet shower or tub, and a dripping faucet can keep them entertained for hours. Even a water bowl quickly becomes a toy here – it’s best to put a placemat or something similar underneath it.