Not all dog training aids live up to their promises. Some can even destroy a dog’s trust in its human. Read which ones are recommended and where caution is advised.

For successful dog training, dog owners must find a way to translate human desires into “dog language”. Many aids facilitate communication between humans and dogs and thus also promote the bond between the two.

Very important: Not a single aid, no matter how well-thought-out, can replace what we have to give the dog in addition: reliability and consistency.

The voice as an aid in dog training

The two most effective helpers in dog training are your voice and your body language – as long as they are used correctly and, above all, conclusively. When your body signals “stop” and you whisper “here” at the same time, you are creating a conflict that the dog cannot resolve. He will choose what is more demonstrative for him. And that varies from dog to dog.

The basic rules for using the voice are:

Advantage: Your voice is unique and unmistakable for the dog.
Disadvantage: Your emotions usually also sound in the voice, which can unsettle the dog.

Body language as an aid in dog training

The rules for body language are just as simple as with the voice:

In short: the more you have your body and facial expressions under control, the more clearly your wishes will come across to the dog.
Advantage: body language and gestures are easily recognizable for the dog, even from a distance.
Disadvantage: Poorly thought-out gestures and posture can be misunderstood by the dog.

The clicker as an aid in dog training

The clicker is absolutely neutral and helpful. You can wear the small cracking instrument on your wrist and operate it with just one finger.

A high-quality clicker is, for example, the ACME “No. 470 Clicker”. It is made of polished brass and is robust. The soft clicker from Trixie is particularly suitable for sensitive and young dogs, as it has a very gentle click sound. But there are also simple clickers, such as the AniOne Basic Clicker, which you can attach to your wrist with a rubber band.

With each click, the clicker tells the dog that it is on the right track. He praises and rewards without words or gestures, even if the dog is a few steps away. This saves you from praising and rewarding after every little correct exercise, from interrupting an exercise because you have to bend down to pet or to give the dog a treat.

Big plus: Not getting the longed-for click isn’t as frustrating as a “wrong”. It just tells the dog he needs to do something else.
Both the human and the dog have to learn the clicker. One to two weeks should also be praised with “Fine” for the click and at the same time, a treat should be given. Then the click alternately replaces the praise or the reward. And finally, there is only the click and only after some time or many exercises as the crowning finale the human rejoicing and the reward.

The whistle as an aid in dog training

If played correctly, the whistle can replace many words. Whistles come in the ultrasonic range, audible only to the dog, and with different trills, each of which you can give a different meaning to. The whistle has a greater range than our voice and betrays neither anger nor joy.

The Trixie high-frequency whistle with frequency protection, for example, emits high-pitched sounds that your dog can hear very well. But since they’re barely audible to humans, you won’t disturb anyone else when you’re exercising with your dog. If, on the other hand, volume is not important to you and you value design, you should opt for the “Hobith” precious wood pipe. It is handmade from local root wood.

Before the whistle is used, the dog must learn the meaning of the trills. This is not difficult, dogs quickly learn that a “Here” sounded in sync with a welcome (make small, arms open invitingly) and a specific whistle has the same meaning.

Advantage: The whistle is clear, short, and emotionless and therefore often more effective than a call.
Disadvantage: A dog conditioned to it will listen to any whistle set in the same way.

Treats as an aid in dog training

Dog training is possible without the small rewards, but a bite to eat after prompt following will encourage any dog ​​to learn. The treats can be easily stored in the belt pouch and are then always ready.

However, treats are not completely safe. They carry a lot of risks:

Too many treats in super-good dogs make them fat and sluggish.
If there isn’t a bite to hand, some dogs tend to be unruly.
Very clever four-legged friends turn the tables and constantly offer tricks to be rewarded.
In the case of dwarves, incorrect connections sometimes arise because the reward only follows after the human has bent down, i.e. with a time lag before the praise.
Subtract the treats from the dog’s daily food ration to avoid obesity.

Tip: So that your dog does not gain weight, you should use treats during training that are not too rich. The Chewies Training*, for example, are intended for daily training.
Advantage: The treat in the hand always arouses attention and motivation.
Disadvantage: Many dogs demand the treats vigorously after each exercise.

The feed bag as an aid in dog training

It’s actually a hybrid of a treat and a fetch toy. The bag is closable and is filled with treats. The dog is allowed to “hunt” him after completed tasks, has to bring him back and then gets his reward from the opened bag. The Trainer Snack Dummy from Hunter, for example, is a helpful helper in dog training.

Once the dog has grasped the principle, just looking at the bag is enough to concentrate fully and eagerly await tasks that will bring him closer to the coveted contents of the bag. The risk: If you don’t hope for a bag, you sometimes lose your desire to learn. So you should always have it with you.

Advantage: The joint “work of looking for prey” corresponds to the dog nature.
Disadvantage: Without the feed bag, many dogs forget their motivation and no longer work together.

First of all, a collar or harness is the connection between the dog and the leash. They have a direct effect on the dog’s body and are mostly used as training aids to prevent undesirable behavior. Even the normal soft collar has an effect on the larynx when the dog on the leash pulls. Even a dog in a harness will be stopped when it is within range of the leash.

Therefore, always choose a collar that is comfortable for your dog to wear. The Hunter* Freestyle training collar made of thin, stable rope is recommended for small dogs. For large dogs, on the other hand, wider collars are recommended, such as the “Larvik” training collar from Hunter*. With an additional handle, the dog can be easily corrected.

When it comes to harnesses, it is important to consider your dog’s comfort. For example, the “Neopren Vario Quick” dog harness from Hunter is very softly padded.

You should always be careful not to injure the dog by pulling on the leash, collar, or harness. When used incorrectly, the collar and harness are also counterproductive as “educational aids” and unsettle the dog. Therefore, these funds are not so good as support in dog training.

There are also so-called “education collars” that work with punishments such as unpleasant noises, smells, or even electric shocks! Please refrain from using such agents!

The leash is the connection between you and your dog. It initially serves as a means of keeping the dog in close proximity to its human. Later it gives people security in precarious situations such as heavy traffic. A two-meter line that can be shortened several times is ideal as a means of training.

Pull-out leashes are unsuitable as a training aid, but in cities where leashes are compulsory, they are at least a way of giving the dog a larger radius.
For four-legged friends who rush away – without a leash – and forget their entire upbringing at the scent of a rabbit or the sight of a deer, the tow leash is ideal. Used correctly, the dog understands that it will be stopped abruptly, as if by magic if it does not turn around when its master calls. Tow lines come in different lengths. The longer they are, the greater the risk that the dog and leash will become tangled in the undergrowth, which is why tow leashes are more useful in open terrain. However, you don’t always keep the dog from relapsing if it’s off-leash.

For example, the extra light fuchsia tracking leash by Trixie* is available in different lengths and bright colors.

Advantage: The towing line gives notorious “hunters” limited, safe freedom of movement.
Disadvantage: Many dogs lead people on a leash instead of the other way around and thus lose respect.

All dogs that like to hunt, pull, want to test their strength, or are always ready to play can be quickly motivated with a ball or another dummy. Often just picking up the toy is enough to make them rush to humans from any situation. With the toy in their eyes or in their nose, they are ready for super performances – searching, retrieving, taking hurdles, catching Frisbees, or completing basic obedience exercises.

There are different dummies you can work with. If you want to train in the water, this trainer water dummy is ideal.

If the “prey” is only available at the end of a work session, the risk of addiction is reduced, because ball junkies don’t learn: their entire effort is now directed towards the ball. Toys are often used in the training of hunting and service dogs and relieve the tension built up during the required performances. Used correctly, they primarily satisfy workaholics and tireless dogs.

Advantage: With spirited dogs, the toy replaces the treat.
Disadvantage: The risk of becoming addicted to the toy increases with the frequency of use. 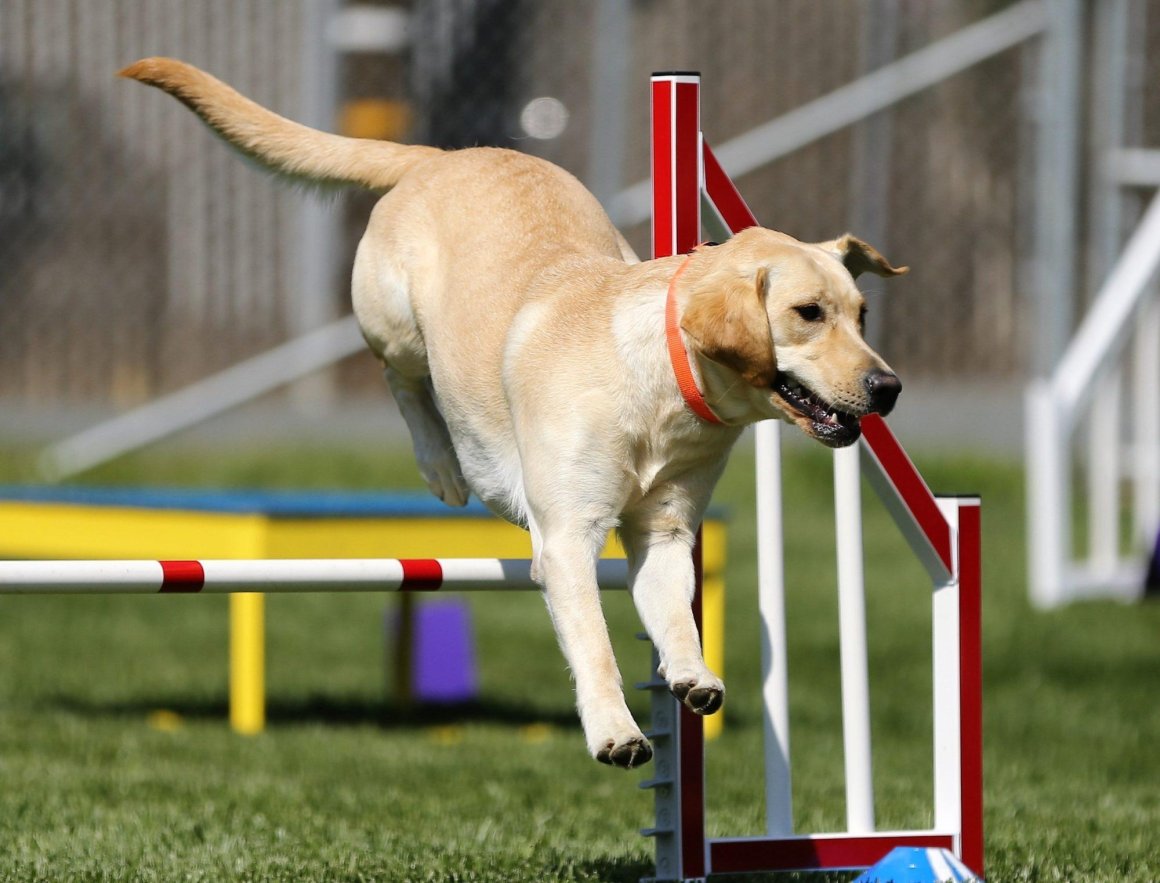 The slender staff with a rubber or plastic head is nothing more than an extended human arm. It is particularly useful for small dogs. The dog is always rewarded when it nudges the target’s head with its nose. This allows him to be steered, learn quickly to walk figures or to head for obstacles in dog sports or to drive balls. Targets are short-term aids that can soon be replaced by the outstretched human arm.

The Trixie Dog Activity Target Stick is equipped with a nose-friendly ball at the tip so that nothing happens during training. A clicker is integrated.

Advantage: Dogs quickly grasp the aiming rod and can be easily steered with it.
Disadvantage: Without simultaneous praise, the target loses its appeal.