With expressive turquoise-blue eyes, the Tonkinese looks curious and attentive to the world and will enchant you too. The rare cat breed combines the best characteristics of Siamese and Burmese. Affectionate, intelligent, and playful, the Tonkinese is a perfect cat for active families.

History and Origin of the Tonkinese

The origin and history of the Tonkinese are closely linked to the history of the Burmese cat. Navy doctor Joseph C. Thomson brought the cat Wong Mau to San Francisco from Myanmar (formerly Burma) in 1930. After the doctor mistook Wong Mau for a Siamese cat with a special coloring, he mated her with a Siamese male. The litter produced kittens with different characteristics. Today, Wong Mau is regarded as the forefather of Tonkinese and Burmese breeding. 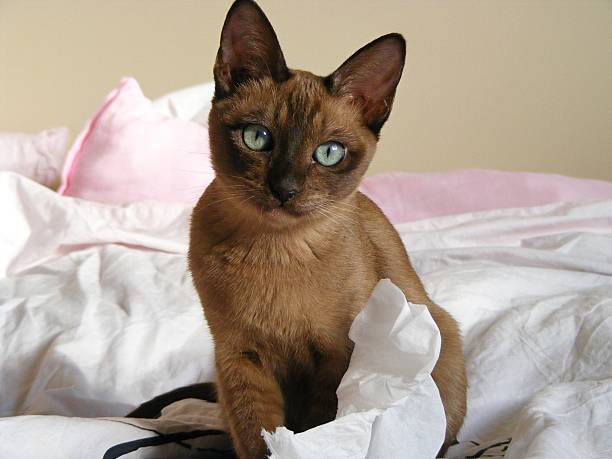 In Canada in particular, the Tokanese was subsequently bred and initial hybrid traits were deliberately bred out. The Tokanese known today with its numerous advantages is largely due to the Tokanese breeder Milan Greer from New York, who started a controlled breeding program in 1950, which ultimately also resulted in the applicable breed standards, which were set by the CCA in 1972. In Canada, the Tokanese cat was recognized as a pedigree cat by the Canadian Breeding Association as early as 1965. Today, Tokanese breeders are mainly found in Canada and the USA, but there are also a few breeders in Europe who have dedicated themselves to breeding the rare pedigree cat.

The Tonkinese is not only people-friendly but also sociable and affectionate and therefore not very keen on being alone. She enjoys receiving attention and affection. Thanks to her intelligence, the Tonkinese uses her fine and rather quiet voice in a targeted manner to emphasize her wishes and to have them fulfilled. But the active cat also shines with its balance and its sociability and so it gets along excellently with children and dogs. The curious Tonkinese has no objections to action and so she usually approaches visitors openly and actively.

The Appearance of the Tonkinese

You can confidently call the Tonkinese a true beauty. With their large, almost almond-shaped eyes in aquamarine to turquoise, the Tonkinese cat is a hit at first sight. The situation is different with solid-colored cats, whose eye color can vary from green to yellow-green. The medium-sized cat breed with its oval-shaped paws and slightly longer hind legs compared to the front legs has a short, silky soft coat of hair which, thanks to the lack of undercoat, nestles closely to the body of the well-proportioned Tonkinese cat. Other clear breed characteristics are the ears on the side of the head, which are set wide apart, the muscular neck, and the slender but muscular legs. In addition, the length of the tail of the Tokanese corresponds to the length of its body.

If you are thinking about getting a Tonkinese or a Tonkinese kitten, then you have to consider a few things. The Tonkinese cat is not only extremely sociable but also a real bundle of energy. Although the Tonkinese loves to cuddle, they also have the temperament and an urge to move that should not be underestimated. While members of some other cat breeds feel quite comfortable in a single household, this is somewhat different with the Tonkinese, because they need a lot of attention, want to be kept busy, and are extremely reluctant to be alone. On the other hand, thanks to its balanced character and energy, it is an ideal family cat, because the docile Tonkinese usually likes hustle and bustle, because it has a stimulating effect and provides variety, which the Tonkinese loves.

An absolute whirlwind with lots of energy, the Tonkinese loves to climb, play and work out. Despite her human focus, she enjoys being able to roam through nature. An apartment with many opportunities to play and climb and a secure garden that is cat-friendly and varied would be ideal for keeping cats. Since the Tonkinese cat is not only docile but also fearless and not easily frightened, you can easily get her used to the leash and take her for walks in nature to offer her as much variety as possible.