The magnificent coat pointed ears, and impressive size makes the Maine Coon one of the most famous cat breeds. Here you can find out everything you always wanted to know about the popular cats.

History and Origin of the Maine Coon

The Maine Coon is an American cat breed from the state of Maine. It was probably given the nickname “Coon” because of its resemblance to a raccoon. As early as 1860 one finds the first evidence of the existence of a semi-long-haired and large cat, which is still called “Shag” (shaggy cat) here. The cats originally came to the States with the emigrants from Europe, crossing various breeds. The dense and long fur was a great advantage for the cats and enabled them to survive the cold winters in the eastern United States. In particular, Angora cats were mated with the domestic cats there.

In 1895, a representative of the breed won the New York Cat Show but was quickly forgotten. It wasn’t until 1950 that enthusiasts rediscovered the breed and founded the Central Maine Cat Club. The American Cat Club recognized the Maine Coon as a separate breed in 1973. The biggest problem with the cat breed is and remains the small genetic base, which consisted of only five cats. There is no representative of the breed that does not descend from these animals, which makes the animals partially susceptible to disease. Nevertheless, the Company is a very popular and pretty house cat today. They became better known in Europe after being recognized by FiFé, the international federation of cat breeders associations. Nevertheless, cats are still a minority among domestic cats.

The Maine Coon cats are affectionate and friendly animals. In terms of behavior, they are sometimes more like a dog than a cat, as they are very sociable and do not like to be alone. They are therefore also known as “dog cats”. They particularly enjoy going for walks with their owner, whether on a leash or not. The colony also meows a lot and happily and “speaks” with both its own species and its humans. She gets along well with dogs once she gets used to it. The cats are very intelligent and interested in their surroundings, which can lead to them learning to open doors, for example. Even when they are old, they still like to play and can even learn how to fetch and other little tricks.

Due to their friendly and open nature, the Maine Coon is an ideal family cat.

The Appearance of the Maine Coon

The Maine Coon is a semi-long-haired and sometimes extremely large breed of cat with a long, bushy tail. Individual specimens reach enormous sizes of up to 1.20 meters in length and weigh up to 12 kilos. A special distinguishing feature is their wide ears with small ear tufts, which are reminiscent of a lynx brush. The fur can be any color except golden and is water-repellent. The large cats have very powerful paws, with some members of the breed having six or seven toes. The paws look like the cat has a thumb. This genetic defect of polydactyls is a criterion for exclusion from breeding in Germany but is permitted in the USA. 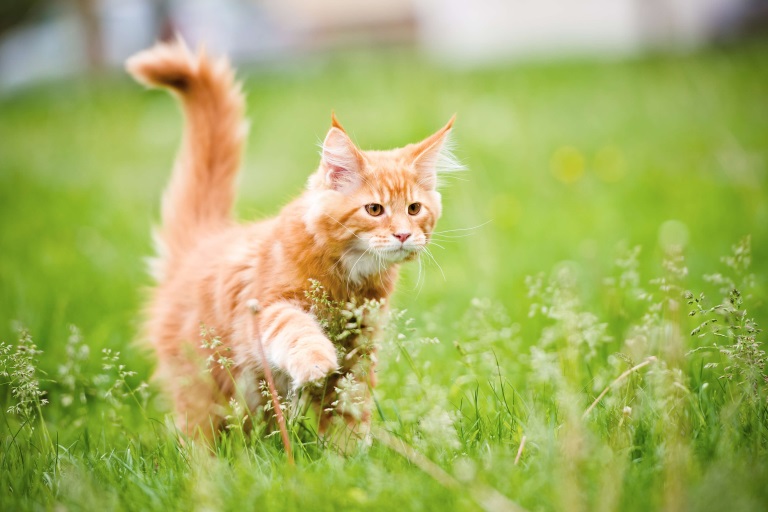 Despite its enormous size, the Maine Coon is not a pure outdoor cat. If they have only been in the apartment from an early age and know nothing else, the house tigers will also be happy inside. However, you should provide her with enough living space and ideally a large and stable scratching post. Also when purchasing the rest of the accessories, you should keep in mind that even the little kitten will grow up quite a bit. Ideally, the furry friends should also be able to sit on a cat-safe balcony or terrace when the weather is nice. They particularly like having an elevated vantage point from where they can keep an eye on their surroundings. Since the Maine Coon is a very sociable cat, you should not keep them alone. Even if you are at home a lot, this does not replace contact with other dogs.

Once a colony has developed a taste for it, they prefer to spend their time outdoors in nature. She not only goes on a discovery tour in the garden but also loves to follow you when you go for a walk or jog. Here you should be careful that the velvet paw does not follow you unnoticed and you then have to carry it all the way back. With the help of a cat leash, you can also give your indoor cat this luxury. However, you should take it easy here and maybe do small practice laps on the terrace first. That way you can see if the cat likes it or if it’s panicking.