The Sacred Birman, also known as the Birman cat, is the “golden mean” between the Persian cat and the Siamese cat, which is reflected in the character and appearance of the breed. In the profile you will learn everything about the history, nature, and attitude of this interesting breed.

Contents hide
1 History and Origin of Saints Burma
2 Essence and Character
3 The Appearance of Sacred Burma
4 Attitude and Care
4.1 Acquisition of a Sacred Burma
4.2 Outdoor cat or indoor cat?
4.3 How much occupation does Sacred Burma need?
4.4 Grooming and feeding

History and Origin of Saints Burma

The exact origin of the Birman cats is not clear. According to legends, they were already used in the ancient Orient as temple cats in what is now Myanmar, which earned them the nickname “saints”. The roots of today’s Sacred Burma, however, lie in 20th-century France. A certain Mr. Vanderbilt brought a pair of Birman cats there from his trip to the Orient around 1919. The tomcat had an accident on the crossing, but he still wanted to continue breeding. So he mated the boys to Siamese cats or a cross between Siamese and Persian cats. The new breed was recognized in France as early as 1925 and found its way to Germany with the tomcat “Timour de Madalapour” as early as the 1930s. During the Second World War, breeding almost came to a standstill and it was only in 1955 that its existence was secured again. The pretty cats then conquered the hearts of cat lovers worldwide. The Birman cat is not to be confused with the short-haired Burma or Burmese.

The Sacred Birman is a friendly and gentle cat breed. She is very people-oriented and needs a lot of attention from her owners. She adapts to all circumstances and also quickly trusts strangers. The Birman cats are very frugal and only use their claws in an emergency. They play cautiously and tend to be withdrawn rather than aggressive, making them ideal family cats. They love to cuddle and need daily snuggles. In addition, the cheerful cats remain curious and playful into old age.

The Appearance of Sacred Burma

Despite its popularity, the Sacred Birman never became a fashionable cat and today looks much the same as it did when breeding began. The round head with small, rounded ears and large blue eyes sits on a strong body. The fluffy coat with a little undercoat is kept in the typical point colors. The face, ears, legs, and tail are always darker than the rest of the fur. A special distinguishing feature compared to other point cats are the so-called “gloves”. The Birman cat’s round paws may only be pure white in color.

Acquisition of a Sacred Burma

Before purchasing a Sacred Birman, you should be sure that you can take care of the animal for a long time and that you have enough time. The Birman cats do not like to be alone and ideally need someone of their own kind to play and cuddle with. Once you have decided on the breed, you should seek out a reputable breeder who is a member of a registered club. Pay attention to the behavior and health of the kittens and the parents. No ancestor should appear twice in the family tree. For a purebred kitten with papers, you pay around 800€.

The calm Birman cat is an ideal house cat that can easily be kept indoors. Because of their trusting nature, it is even better not to let the cat roam outside unattended. She goes up to strangers without hesitation, which in an emergency even ends in a kidnapping. As long as she has enough space in the house and a scratching post to play and romp around, the Sacred Birman is happy even when she is not outdoors. If they do want to enjoy some fresh air, you can let the cats into a secured garden or onto the balcony. 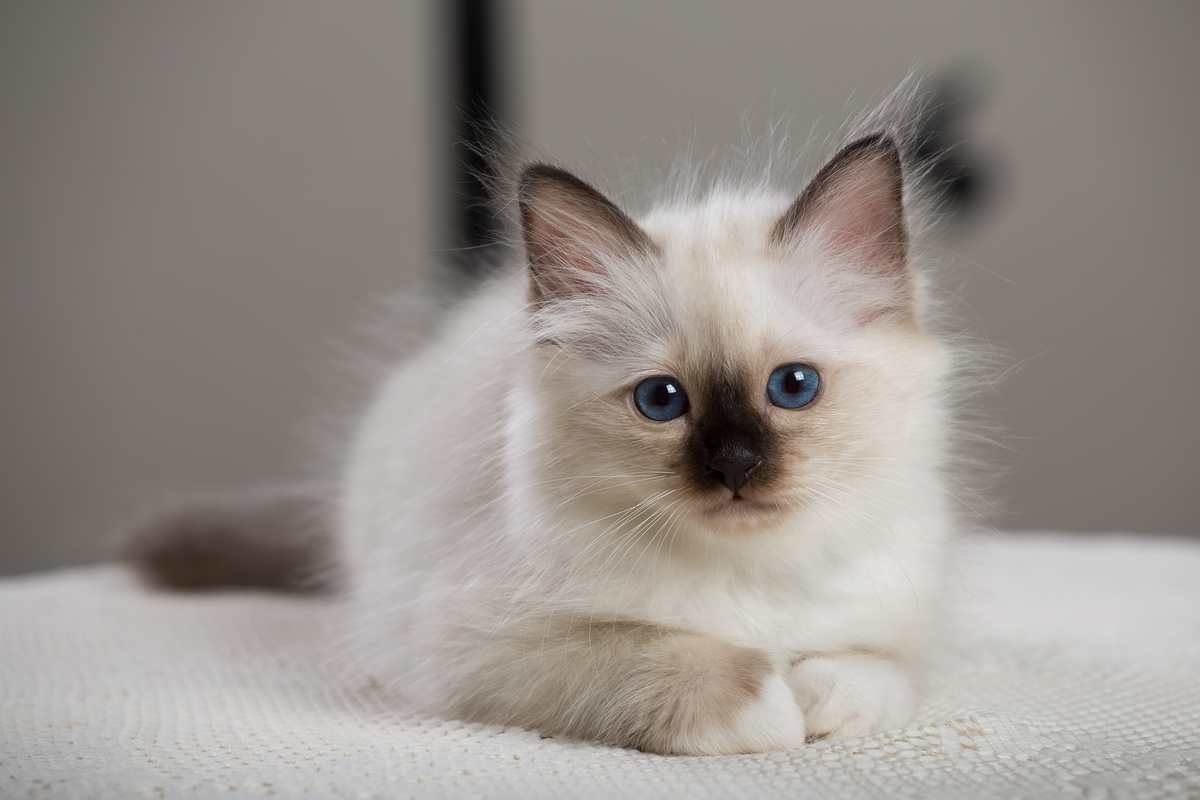 How much occupation does Sacred Burma need?

The bright Birman cat is alert and likes to play extensively and a lot. She is satisfied with any kind of toy and loves it when her humans are engaged with her. The inquisitive velvet paw curiously explores every new toy and happily carries it around the house. If the Birman wants to play, she will quickly bring her chosen toy to your bed. A large scratching post for playing and sleeping offers further employment opportunities and also helps the cat with claw care.

The Birman’s semi-long, smooth coat is silky and easy to care for because it has little to no undercoat. So that your cat does not swallow too much hair when cleaning, you should brush it regularly and remove loose hair. In general, the Birman sheds very little and the fur does not tend to become matted. During the spring and fall molt, plush cats shed a little more and need extra support. Since long-haired cats generally swallow more hair, hairballs can form in the digestive tract. There is special cat food to naturally reduce the formation of such balls of fur in the stomach.